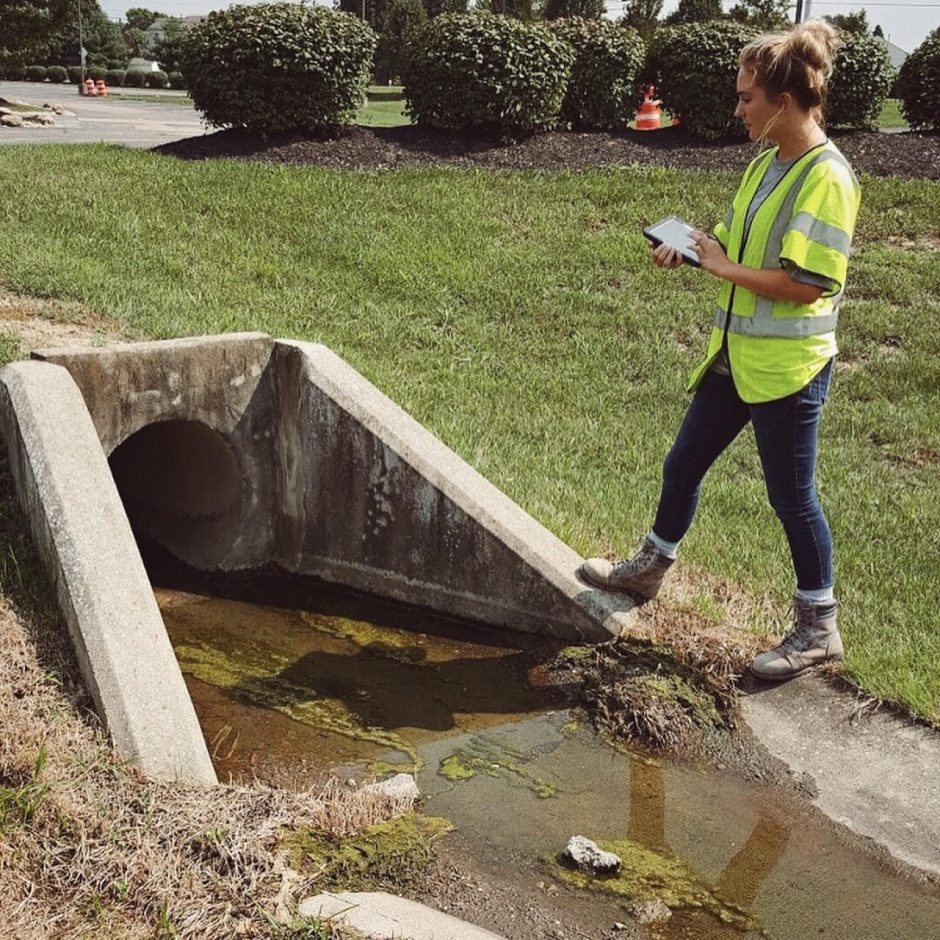 This is an example of what an outfall would look like. This actually isn’t one that the county maintains, but my boss and I use it an example because it was out and exposed enough for a photo. Some of the outfalls were more hidden and tucked away in the more forested kind of areas and didn’t have the nice head wall. (Credit: Robert Lentz)

For ten weeks, from mid-June to mid-August of this year, University of Dayton Environmental Biology major/English minor Tessa Farthing learned how to go out in the field and assess the health of stormwater inlets and outfalls in various places in Butler County, a 470 square mile area between the cities of Dayton and Cincinnati in southwestern Ohio. Not only was she trained in how to find inlet and outfall areas, which was sometimes challenging in and of itself, she was also trained to use some very sophisticated equipment. For some of the tasks she needed to do, however, it was the not-so-technical equipment that ruled the day. In addition to everything else, Farthing says, she was trained how to use her nose.

“At Butler County, I learned that your nose is an important part of gathering data in the field,” Farthing explains. “Sometimes what you smell can be a valuable piece of information when assessing a stormwater area. For example, a sulfur smell can mean there’s a sewage issue nearby. But the smell is just one piece of information that goes into a site assessment.” 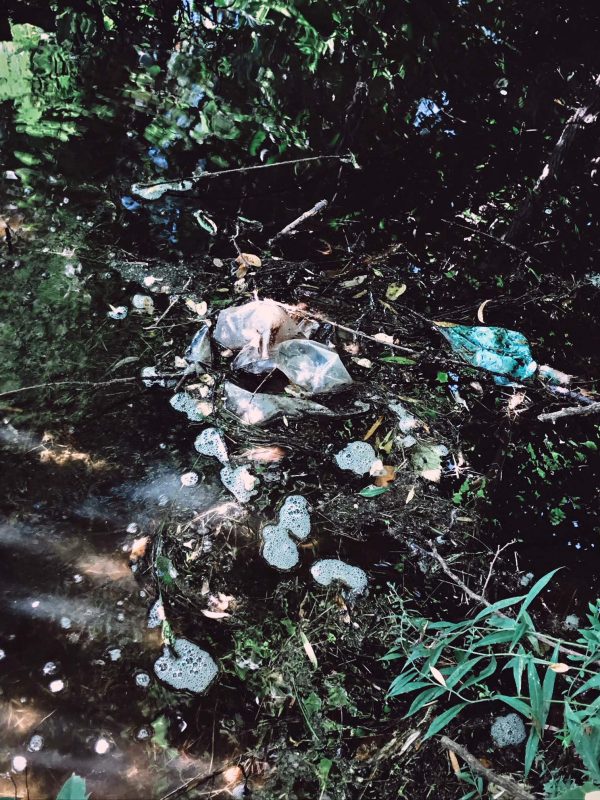 We also looked for the presence of soap or foam in case there is intentional or unintentional dumping of soaps from carpeting cleaning, industrial washing, car washes, golf courses, washing machines, swimming, pools. Foam can also be a result of natural decomposition, so you also have to look for decaying plants, a solvent or soap smell vs a musty smell, and artificially white/bright bubbles vs duller/more yellow foamy bubbles. The bubbles above are most like from an unnatural source and they were also accompanied by a fish kill at the particular source, so that was another indicator that some kind of illicit discharging was occurring at the start of this storm water system. (Tessa Farthing)

“While I wasn’t in the lab as much as the field, the Stream Team volunteer program is an important component of the Storm Water District, and they are an Ohio EPA Level 2 Credible Data approved program, which follows very specific procedures in order to output credible data,” Farthing notes. 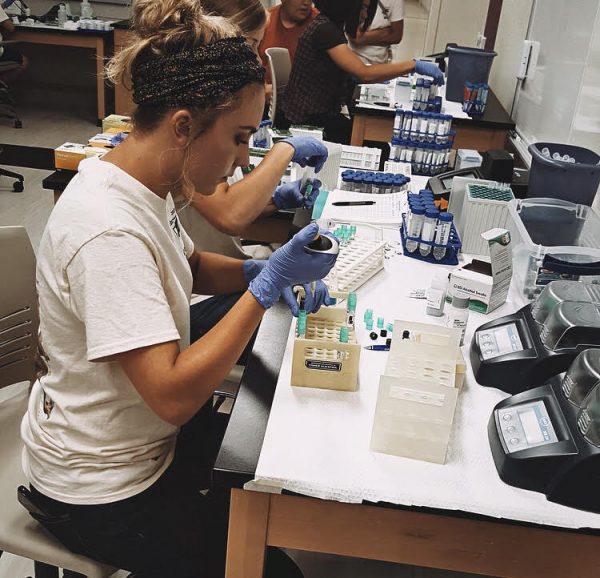 Tessa in the lab conducting the phosphorus test. She is adding the test kit reagent to one of the water samples. (Credit: Tessa Farthing)

One of the tasks Farthing was involved with was dry weather screening, where after a 72 hour period with no rain, outfall sites are checked. Nothing should be coming out of the outfall sites in those cases, and if something is, then that is a cause for concern.

“I also learned to use my nose and my eyes to help determine what film layers were, if found and whether it was something unusual. I learned what different types of films looked like. There are clues to determine, for example, if you are looking at a biomass or oil film,” says Farthing. “Color can also be a clue. Clear discharges that seem to be killing off algae or fish (algicides) can be from pool chemicals. A large algal growth at an outfall can mean fertilizer has been discharged there.”

One of her biggest tasks of the summer was creating a manual describing where inlet and outfall sites are using GIS mapping of the area with a Trimble GPS receiver. She took specific coordinates and filled out forms, a process that will make it easier for future researchers to find discharge sources. “You might think it would be obvious where inlet and outfall sites are,” she says. “But in reality, they can be well hidden and hard to track down. They can be well hidden in wooded areas and other places.”

To find inlets and outfalls to study each day, Farthing chose sites that also needed mapped and located. After traveling out to the site, Farthing looked over the area and tried to topographically visualize where water might flow.

“If you have a stream or a creek, you’re usually looking for a corrugated pipe or plastic pipe with rock channels. That’s likely to be an outfall. Inlets, on the other hand, are places where rainwater initially collects,” Farthing notes.

The orange-colored channel staining here would be iron oxidizing bacteria. The presence of this bacteria is actually completely normal and does not impact human health although it may be aesthetically alarming (right). The oily film layer produced on the top of the water here is the result of iron-oxidizing chemolithotrophic bacteria. If the film breaks up easily it is usually a result of natural decomposition; if the sheen doesn’t break apart on contact and more just sticks to the glove or stick then it might be the oil or petroleum. This is where sense of smell is also beneficial. (Left) This is an example of algal overgrowth typically as a result of residential or agricultural fertilizer runoff. (center) (Credit: Tessa Farthing)

In the Engineer’s Office/Field: Robert Lentz is the Butler County Storm Water District Coordinator, Eric Pottenger is the Development Services Manager, Theresa Barnes, P.E. is a design engineer in the stormwater department and Jody Bohn is the stormwater inspector. The county engineer is Greg Wilkens, P.E., P.S.

“Everyone that I worked with in the Engineer’s Office and Stream Team was exceptional. They taught me so much about civil engineering in regards to the environment, stormwater, and source water protection,” Farthing enthuses.

Along with her co-workers, Farthing also enjoyed the fieldwork that was integral to her ten-week internship. “I enjoyed doing the mapping and being outside. There were so many beautiful sites. Some very nice wetlands. I highly encourage people to get into the environmental biology field. There are a lot of young people joining right now as well as older people who have had other careers before. There’s a lot of work to do and a lot of need for more people. It’s a great field to get into.”

Top image: This is an example of what an outfall would look like. This actually isn’t one that the county maintains, but my boss and I use it an example because it was out and exposed enough for a photo. Some of the outfalls were more hidden and tucked away in the more forested kind of areas and didn’t have the nice head wall. (Credit: Robert Lentz)