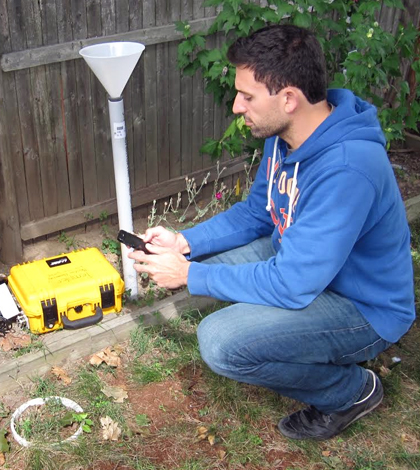 While cars and factories are to blame for most of the carbon dioxide emissions in city centers, a surprisingly large source of CO2 lies in areas right outside city cores. Boston University researchers have uncovered a large source of metropolitan carbon dioxide emissions where few would have expected it: soils in lawns, gardens and other landscaped areas people maintain around cities.

Steve Decina, a doctoral student, Lucy Hutyra, associate professor in the Department of Earth & Environment and Pamela Templer, associate professor of biology, have found that soil respiration can be a large source of CO2, in some cases emitting as much as 75 percent of the CO2 as cars and factories in a city center.

“We found a gap in the literature,” Hutyra says. “While previous studies may have touched on carbon contributions to the atmosphere from soil respiration, they did not look as deeply into seasonal effects on the cycle at high frequency over an entire growing season like we did. They also did not look at as many sites.”

Although satellite data show CO2 emissions from around the globe, satellite images do not indicate whether the sources are biological or anthropogenic. “Those are factors we are trying to tease apart,” says Templer.

An important piece of equipment for their work is the LI-COR 8100 automated soil efflux system. It consists of a small briefcase containing an infrared gas analyzer attached by tubing to a chamber with a bellows. The bellows lowers and raises the chamber atop a PVC soil respiration collar, forming a closed seal. The collar, which protrudes 2 or 3 centimeters above the soil, is hammered into the ground and left to equilibrate for two or three weeks.

The soil efflux system allows measurement of the rate at which CO2 is accumulating. It shows the change in CO2 over time. A sensor inside the chamber measures the air temperature and probes measure soil temperature and volumetric water content. Other measurements made by the team include the pH of soil via a pH meter and percent soil organic matter by loss on ignition of soil samples inside a muffle furnace. Depth and mass of litter layer of soil are measured, depth by direct measurement and mass via a drying oven and balance.

Nitrogen cycling and nitrogen in the soil are also measured in the lab colorimetrically. Net mineralization of the soil is measured via the buried bag method, where a breathable polyethylene bag surrounds a soil core 10 centimeters wide.

The team took hundreds of samples, resulting in months of painstaking lab work.

“Other studies have tried to quantify carbon and the effects of soil respiration on the atmosphere, but our study went on for a longer time period than previous studies and included more sites,” says Hutyra. “We are using established methods, but the way we are using them is a little different than previous groups have employed them.”

“We include an investigation into the variability of sites in urban areas,” Templer adds.

The need for a study like theirs was only becoming more critical. A study was needed that not only addressed CO2 emissions but also tried to begin distinguishing between biological and anthropogenic sources. “As landscapes become more urbanized and the landscape changes, scientists will find that partitioning sources of the CO2 to be a more important task as time goes on,” says Decina.

A complication of the team’s soil respiration and CO2 emissions work is that the biota both release and take up CO2 in the urban area, just like in forests. “Globally, the CO2 from soil respiration is nearly canceled out by photosynthesis,” says Hutyra. “But fossil fuels emissions upset this balance. Residential flux, or changes in soil CO2 due to human activities in the soil, are also not being counteracted by photosynthesis due to the low biomass of trees in these areas.”

Human activities that increase the amount of CO2 released from the soil are activities that many people might incorrectly assume are innocuous, such as adding mulch and fertilizer to one’s outdoor property. “Your farms, your landscaped areas, how they are managed and how much they are disturbed determines how much carbon emissions there will be,” says Templer. Among wild urban vegetation at the end of the growing season, Elena Nizhnik digs resin bags out of the soil next to a deposition column at one of the urban sites in Boston. (Credit: Steve Decina)

Whether properties are rural or urban, the same correlation between people disturbing soil and higher carbon emissions has been shown to hold.

Although the study only officially began in 2014, the team has been looking at pieces for years. Though the team focused largely on the Boston area for the current study, complementary analyses were also performed in New York City and Washington, D.C. “We try to focus on the Bos-Wash (Boston to Washington, D.C.) corridor,” says Hutyra.

“Very different areas may give different results. For example, Phoenix, Arizona would probably give different results because it’s arid, plus there would be land maintenance and gardening differences,” Hutyra explains. “The problem is there’s so much ground to cover and we can only take so many samples. It would really help if we could clone Steve.”

Decina laughs, “OK, if you think we should.”

Fluxes in soil respiration can be quite large, especially at the height of growing season in the spring. Fortunately, there is a simple, natural way to try to counteract increasing CO2 emissions that are likely to occur with more urbanization. “It is helpful to plant more trees,” Templer suggests. “Photosynthesis will go to work and take up extra carbon. It’s good for city planners to incorporate trees if they can.”

In terms of new technology to examine CO2 emissions, Hutyra mentions the Orbital Carbon Observatory 2 (OCO2), launched in 2014, which measures total atmospheric carbon. OCO3 will be launched in 2018. The team hopes to get city-scale mapping performed of CO2 emissions and differentiate biological and anthropogenic carbon sources. From there, scientists at the National Oceanic and Atmospheric Administration can perform isotopic measurements in flask samples which distinguish Carbon 12, 13 and 14, allowing differentiation between carbon origins.

The Boston University team performing the work consists of 7 people, including faculty professors, post-doctoral researchers and doctoral students. The team also does community outreach including showing LI-COR equipment at farmers’ markets, during public tours of Boston University facilities and on elementary school visits.

“It’s important to emphasize the interdisciplinary nature of this work,” Templer says. “We have biologists, geologists, landowner managers and biochemists coming together to work on our research. It’s very much a team effort with many specialties represented.”

“Another important thing about our research is it shows just how vital the biology of cities really is. It’s surprising what a huge contribution biota can make,” mentions Decina.