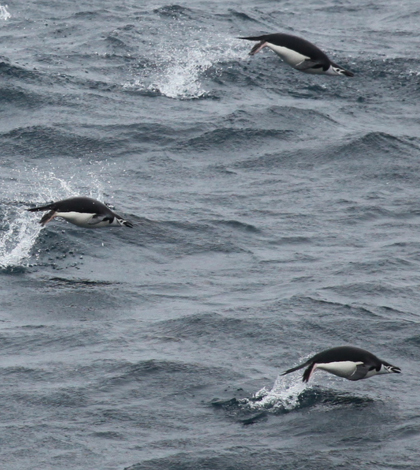 The Southern Ocean is special among the world’s oceans. Unchecked by large landmasses and driven by westerly winds, the ocean is able to form a circular flow around Antarctica, making up what is the planet’s largest current.

This current is so vast that it touches parts of the Atlantic, Pacific and Indian Oceans, churning waters together in a circulation that pulls up deep water to the surface where it can exchange gases with the atmosphere and then return to the bottom. Once those waters return to the ocean floor, they can take with them large amounts of carbon dioxide, sequestering the gas away for hundreds or thousands of years.

Due to the sheer extent of the Southern Ocean’s activities, it is difficult for scientists to know for sure if the area is a net carbon source or sink. And though they know more about the ocean than they used to, researchers still don’t have all the data that they need to make the determination.

A new campaign led by the National Center for Atmospheric Research (NCAR) is looking to uncover more key dynamics of the Southern Ocean and its relationship with the atmosphere above. Called the ORCAS campaign (for O2/N2 Ratio and CO2 Airborne Southern Ocean Study), the effort will rely on flights completed by an aircraft outfitted with many sophisticated instruments for dissecting the fluctuations of gases between the ocean and the air. Graphic detailing what will be studied throughout the ORCAS campaign. (Credit: Alison Rockwell / National Center for Atmospheric Research)

“A significant contributor to predicting future climate comes from how much CO2 that plants and the ocean takes up. Oceans have been taking up about 25 percent of the atmospheric CO2, but about half of that gets taken up by the Southern Ocean,” said Britton Stephens, atmospheric scientist at NCAR who is co-lead principal investigator on the ORCAS campaign. “But we don’t understand the processes well enough to predict how it will behave in the future.”

Some of the things that he and others are looking to dissect through the effort, flying out of Punta Arenas, Chile beginning Jan. 15, include the total amount of oxygen over the Southern Ocean. They are also looking to see how the gas interacts with carbon dioxide, as well as biogenic gases at local and regional scales.

The goal of the effort, Stephens says, is to understand all the processes that are influencing the uptake of carbon dioxide by the Southern Ocean. To get there, the Gulfstream V jet that scientists will use is outfitted with ultraviolet-absorption oxygen instruments, laser-absorption CO2 sensors, a gas chromatograph mass spectrometer and air samplers that will gather quantities of the Southern Ocean’s air for laboratory analysis.

In addition, the flights will also utilize NASA’s Portable Remote Imaging Spectrometer to observe the ocean’s color, and capture its concentrations of chlorophyll and phytoplankton.

“We also have a large modeling component running Earth systems models to link measurements of concentrations to fluxes in the sea-air interface,” said Stephens. Data gathered will also be compared to those taken from ship-based studies in the region.
During the effort, scientists will work to calibrate sensors onboard as well as merge new data with points collected in the past. All data will then be made available to the public, Stephens says.

Funding to support the campaign is being provided by the National Science Foundation and NASA.