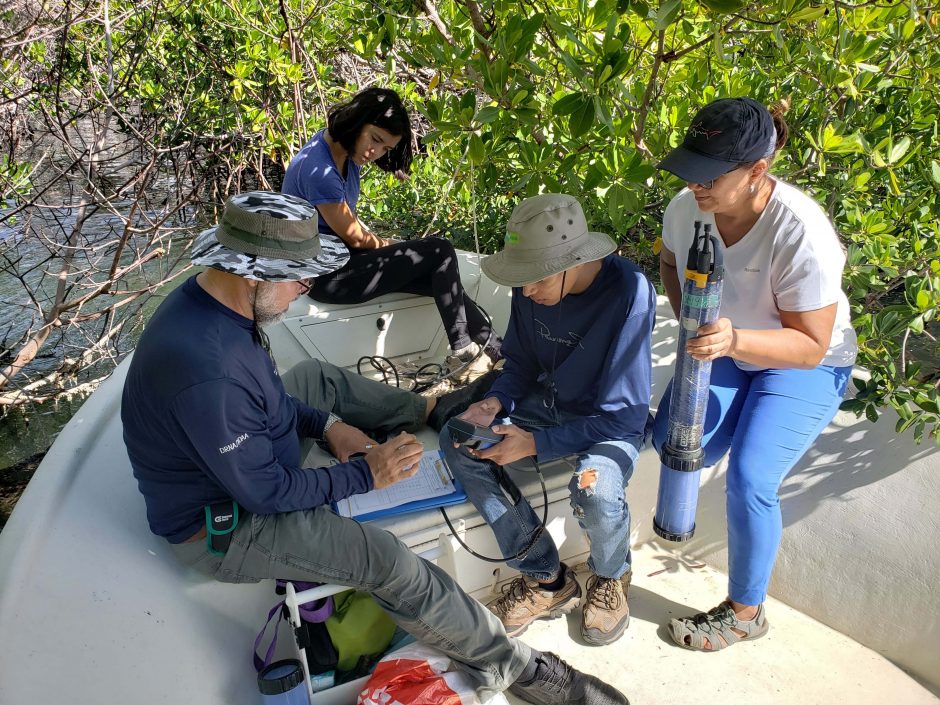 Angel training students and professor on how to use EXO sondes (Credit: Angel Dieppa)

“We are also one of only two NERRS in the whole system that include coral reefs,” says Angel Dieppa, Research Coordinator at Jobos Bay NERR.

Like the other NERRS, Jobos Bay uses the System Wide Management Program (SWMP) protocols. These include measuring abiotic parameters such as nutrients, temperature, salinity, pH and dissolved oxygen. Biological monitoring is also performed, which includes biodiversity measurements as well as habitat and population characteristics monitoring. Watershed and land use is also tracked, with the data managed by the Centralized Data Management Office (CDMO) in South Carolina.

“We use YSI EXO-2 data sondes to gather temperature, salinity, pH, turbidity, depth and dissolved oxygen data. We also get chlorophyll-a data. Sargasso beaching is also monitored as it has been more frequent during the past years. We have 11 data sondes which we use for long term deployment year-round to monitor water quality. They are switched out monthly as needed,” says Dieppa.

Jobos Bay has four stations where nutrients are monitored and grab samples are taken every month. Diel sampling with an ISCO pump is performed for 24 hour periods on a monthly basis. “We are also establishing transects in the mangrove forest for our Surface Elevation Table (SET) data gathering as part of the NERRS/NOAA Sentinel Site Program, also SET infrastructure installation around the Island has been mimicked by the PR Coastal Zone Management Program. We are also using UAV’s (drone) technology to track changes in the ecosystems. Submerged aquatic vegetation is monitored with the help of external collaboration that includes local and outside researchers from Union University, Tennessee. Weather monitoring is also important as it allows us to track the effects of drought and other significant events.” Dieppa mentions.

“We have established a good relationship with the residents here and engage them through our education program,” says Dieppa, who has worked at the NERR for 13 years. The NERR is also partnered with the Departamento de Recursos Naturales y Ambientales (Puerto Rico Department of Natural and Environmental Resources). 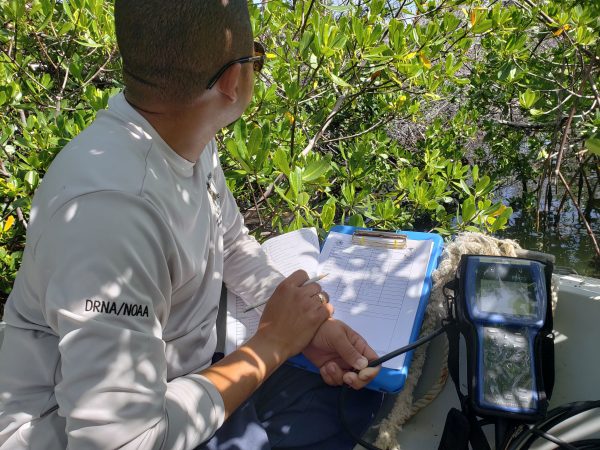 While it has enjoyed local support, Jobos Bay NERR has not been without challenges. “We have had problems with Harmful Algal Blooms (HAB),” Dieppa adds. “Hurricane Maria also had devastating effects for some parts of Jobos Bay.” The marsh location at Jobos Bay has a SET data gathering project. “Maria definitely affected the marsh,” says Dieppa. “The mangrove areas were also impacted. We could also see a lot of erosion on the reef islands after the hurricane. The whole structure of the area was affected.” One of the worst effects of the hurricane was that two of the stations were lost. “We lost our Sutron data logger, telemetry and transmitter,” Dieppa recalls. “However, we were able to save our sondes.” There were also no manatee casualties due to Maria, and the coral reefs did not seem to be noticeably affected.

Despite occasional setbacks such as Hurricane Maria, Dieppa feels that Jobos Bay NERR has been consistently moving forward, and he has enjoyed his work at the NERR with the collaboration of a highly dedicated staff. “I see it as an opportunity to get good data and provide that data to land managers, and in turn have a positive impact on the decisions they make for Puerto Rico.”

Top image: Angel training students and professor on how to use EXO sondes (Credit: Angel Dieppa)