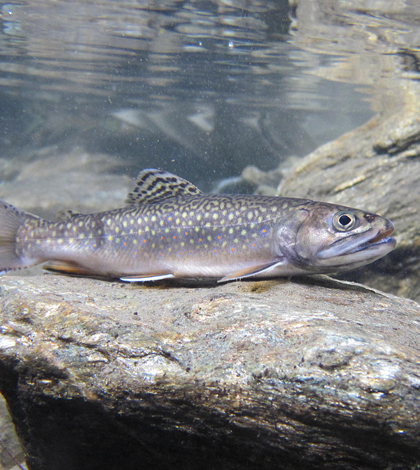 Migrating fish species have it tough when it comes to getting back to their spawning grounds. Most of the time, they’re swimming against high-velocity currents and have to worry about passing through culverts and dams.

But with the right mix of restoration projects, it’s possible to make things easier for these fish, as officials with the U.S. Fish and Wildlife Service (USFWS) know quite well. Crews with the agency in New York have been focusing in recent months on projects that can help brook trout, a fish that is held in high regard by anglers in the state.

Before restoration work can take place, it’s important to know what streams, if improved, will provide the most benefits for brook trout. To make these assessments, USFWS officials use a variety of methods, not the least of which is taking measurements of water quality.

Handheld meters, like the YSI Pro2030 Dissolved Oxygen & Conductivity Meter, assist greatly in these efforts because they allow for quick and simple sampling when needed. And they are also flexible in application, usable in all sorts of water bodies from streams to lakes or reservoirs — anywhere that possible restoration work can take place.

“Dissolved oxygen and temperature (are the most important parameters), which are critical to our focal species, brook trout,” said Thomas Hoffman, fish habitat restoration biologist at the USFWS. “Dissolved oxygen (is first) followed closely by temperature. Conductivity is important when we are sampling using our electrofishing equipment.”

Amounts of dissolved oxygen in water are important because that’s a measure of the gases available to brook trout for breathing. Temperature plays a role in maintaining favorable habitat for the fish. And conductivity is key for determining how much voltage should be applied to a waterway in order to safely stun brook trout for analysis.

Hoffman says that measurements are typically taken by him or other biologists and technicians from his office, as well as others from various state agencies, watershed committees and soil and water conservation districts.

“The data will be used to help prioritize restoration sites,” said Hoffman. “Those with appropriate dissolved oxygen and temperature will be at the top of the list.” This is because restoration projects in those spots will likely maximize benefits to brook trout.

Work to assess streams for restoration throughout New York has been going on for some time, with Hoffman and other scientists commonly finding that a majority of them offer pretty poor conditions for brook trout. Obstacles like perched culverts, which sit too far above a stream’s surface for trout to swim through, are easily found.

But there still has been a bit of a silver lining, Hoffman says.

“We have found more isolated populations of brook trout in western New York than we had previously thought were here, making habitat restoration and connectivity all that much more important,” said Hoffman.