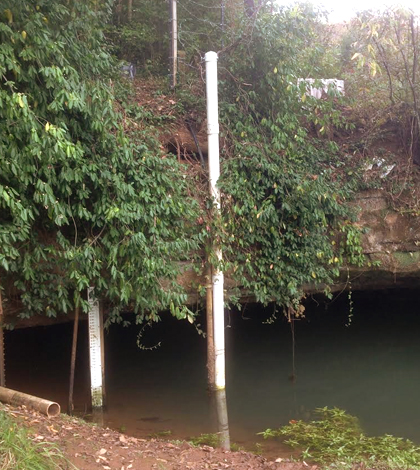 The city of Bowling Green, Kentucky, faces interesting challenges with respect to managing stormwater resources. This is because of its location in a karst region typified by caves, sinkholes, springs and underground streams.

To aid those management efforts, as well as provide research and education opportunities for students, scientists at Western Kentucky University, in partnership and with funding support from the City of Bowling Green, outfitted the Lost River Rise with a NexSens 3100-iSIC Cellular Data Logger and a YSI EXO2 Multi-Parameter Water Quality Sonde. The work is part of the UnderBG Karst Groundwater awareness campaign.

The Lost River Rise is an important location to monitor because it serves as the primary output for a large karst groundwater system in Bowling Green.

Scientists have been able to leverage the capabilities of the sonde and data logger to collect real-time measurements every 10 minutes on water quality in the system. These are pushed to a website and mobile app through a collaboration with the City of Bowling Green. Key water quality parameters that are monitored by the EXO2 include pH, temperature, turbidity, specific conductance and depth.

“The near real-time response and cellular telemetry system allow for close monitoring of karst system responses to rain events,” said Dan Nedvidek, an environmental specialist at EnSafe, Inc., who is helping with the project. “The data logging functions also allow for the collection of detailed background/base flow data which can later be used to classify the level of response seen.” The NexSens 3100-iSIC data logger sits in a protective box supplied by the City of Bowling Green Public Works Department to provide shelter from the elements and vandalism. (Credit: Jason Polk)

Responses can come in a lot of forms, but are usually evidenced by changes in water quality. In particular, depth, conductivity and temperature are of interest to those overseeing the project.

“The depth is important because we convert that to discharge using a rating curve and monitor the site for flood response during heavy precipitation events,” said Jason Polk, director of the Center for Water Resource Studies at WKU. Other geochemical parameters, like specific conductance, are important for detecting pollutants and other contaminants, like road salt, he says.

“Temperature is also an important factor,” added Nedvidek. “Storm pulses can be observed by watching the temperature change as the proportion of stormwater to karst water changes.”

In addition to the real-time measurements, other geochemical and water quality testing is carried out manually by students at Western Kentucky who have plugged findings into several research papers. Project data help with the city’s stormwater and floodwater monitoring and are also used in a U.S. Department of Agriculture study that’s looking into agricultural contaminants.

The data have been important for revealing new findings that show how the karst system in Bowling Green, Kentucky, responds to storm events.

“The biggest surprise so far is the varying response of the system to storm events,” said Polk. He adds that previous studies didn’t uncover the variability because they lacked high-resolution data and the ability to zero-in on different parameters.

“Our preliminary results indicate that the Lost River system shows a much more dynamic and variable response to storm events than previously thought, both in terms of response duration and contaminant loading,” said Nedvidek.