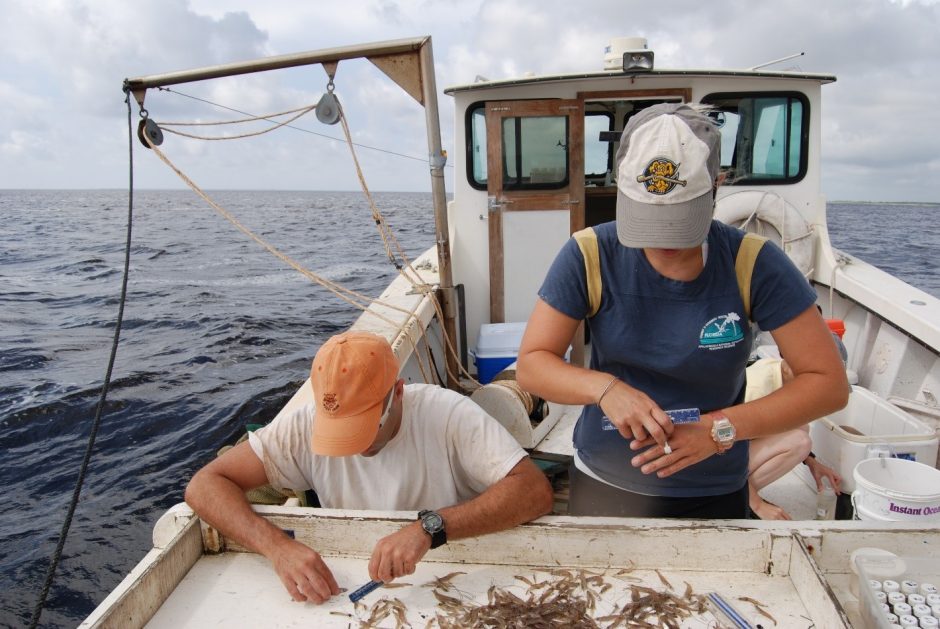 “According to NOAA’s National Ocean Service, about 40 percent of the U.S. population lives in a county connected with the coastline,” says Jason Garwood, Research Coordinator for Apalachicola National Estuarine Research Reserve (NERR) in Florida. “So it’s important for people to learn about these areas. We want to show people how their communities depend on coastal habitats and how we can keep those areas healthy for the future. We want to encourage a conservation mindset.”

Garwood is no stranger to conservation, having spent his last nine years working as Apalachicola NERR’s fisheries biologist before recently taking on the role of research coordinator. Before that, he spent three years at another NERR, North Inlet, Winyah Bay in South Carolina. “We do some of the same environmental monitoring that all NERRs do, but there are some things we do here at Apalachicola that are special, that not everyone has,” he explains.

In terms of standard System Wide Monitoring Program (SWMP) monitoring, Apalachicola NERR’s efforts, like all NERRs, have three parts: meteorology, water quality and water nutrients. For meteorology, Apalachicola uses a Campbell Scientific weather system with a CR1000 data logger. They monitor for temperature and relative humidity using a Rotronic Hygroclip 2. To monitor wind, an R. M. Young anemometer is used. For barometric pressure, a Vaisala PTB 110 is used, for photoactive radiation, an APOGEE SQ 110, and for precipitation, a TR 525 bucket-style rain gauge.  Beyond SWMP, Apalachicola NERR uses Stevens DL 3000 data loggers to record meteorology at four other stations within the NERR.

Water quality is monitored at five stations using YSI EXO-II data logger systems. The EXO series loggers are equipped with smart optical dissolved oxygen, conductivity, turbidity, and pH probes. Unlike other probes, these ‘smart’ probes store their own calibrations, which allows for corresponding sensors to be calibrated together and then put back on their assigned logger unit. For many research projects in situ measurements for water quality are also taken using YSI ProDSS handheld units, which are a more portable version of the EXO units.

For the SWMP portion of their work, their samples are both continuous and gathered on a regularly scheduled basis. Weather and water data are logged by their respective instrument computers and are continuously collecting data. Data are then averaged over 15-minute intervals. Some of the stations are telemetered in near real-time to a GOES transmitter to our Centralized Data Management Office (CDMO).  For all stations, power is maintained via a deep cycle battery, charged through a solar charging array and a solar panel.  For the Non-SWMP weather stations, data are transmitted via a cellular modem to the DEP Stevens website. Apalachicola NERR has 11 water nutrient stations, with 4 of those stations part of SWMP and corresponding to spatial water quality stations that are sampled each month. An hourly tidal cycle sampling is also performed each month. This sampling is done at a single site using an ISCO automated water sampler manufactured by Teledyne. At each location ammonium, nitrate, nitrite, orthophosphate, biological oxygen demand and chlorophyll a are sampled. Samples are sent to the Florida Department of Environmental Protection’s lab for analysis.

A special type of monitoring is being done at Apalachicola NERR that not just any NERR is lucky enough to have: sea turtle monitoring. Inter-agency sea turtle monitoring is being performed in collaboration with Florida Fish and Wildlife Conservation Commission. Research works with the Reserve’s Stewardship section to collect turtle nesting data every spring and summer. Nests are covered with a screen to aid successful hatching. The number of eggs laid is tabulated, as well as how many juveniles hatch successfully. Most turtles seen at Apalachicola NERR are loggerheads, though some leatherback and green turtles are spotted on rare occasions. One of Apalachicola NERR’s staff biologists are conducting a study investigating turtle nesting temperature.

Juvenile fish, shrimp, and crab data are being collected, too. Since July 2000, these data have been gathered to form a baseline database. The baseline data are taken from multiple stations. Data is collected quarterly using a modified otter trawling system pulled behind a boat. The first 20 of every species caught in the trawler is analyzed for species type, size, number caught and sex. They are then thrown back. Apalachicola NERR is home to many species of fish, including red drum, flounder and sea trout. There are also blue crabs, white shrimp, brown shrimp and even pink shrimp. “That’s not all,” says Garwood. “We also have stingrays. Most of these species we ID, note the sex, and throw them back.”

In his nine years at Apalachicola Bay NERR, Garwood has seen the population of the surrounding areas grow, with more people, more houses and more development circling the beautiful eddies of the NERR. “More people and more development can mean more of a threat to an estuarine system, but that hasn’t been the case here,” Garwood says. “We don’t have any evidence that people living here have been hurting the Bay. The people here are good stewards.” Over the past ten years or so, the Bay has experienced some changes. There have been more salt-tolerant species moving into the northern, typically more brackish and fresher part of the estuary. There have been a few big weather events, such as hurricanes, which can change salinity and also make fish disappear. “It can take hours to days until they come back,” Garwood notes. While there was a large oil spill nearby in April of 2010, Apalachicola NERR fortunately saw very little oiling in the form of weathered tar balls. “Mainly our job has been to track changes and gather baseline data. We didn’t see major oiling from that event. Panama City and westward on the other hand, they saw a lot of the spill,” he says. “We were very fortunate here from a biological standpoint.”

Also fortunate are Garwood and others who live and work in the area, as Apalachicola NERR continues to provide allure for residents and visitors alike. “It’s my home,” says Garwood. “It’s my home that I share with the family I work with. My wife works for a local restaurant and owns a small area business that depends on the resources that the bay provides. It’s not just a biological community here but a human community. We rely on the productivity of the biological communities to survive.”

A conservation philosophy pervades the area, giving people there hope for the future.

“If you’re not familiar with NERRs or the NERR system, I highly recommend you pay one a visit,” Garwood enthuses. “You might be surprised what your closest NERR has to offer.”