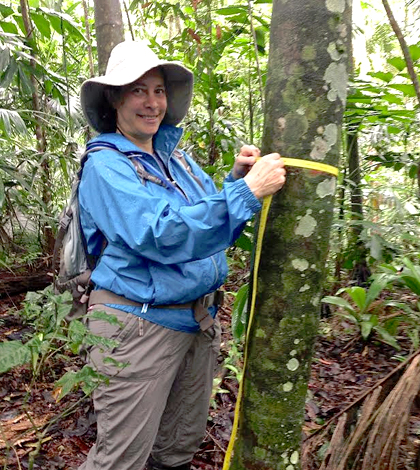 Robin Chazdon of the University of Connecticut and the International Institute for Sustainability, Rio de Janeiro, Brazil, measures a tree in Costa Rica. (Credit: Bernal Paniagua)

“Most people seem aware of how important it is to protect old-growth forests,” says Saara DeWalt, associate professor of biological sciences at Clemson University. “But not everyone realizes that after old-growth forests are cut down, the secondary forests that replace them also have significant value.”

“About 50 percent of a tree is carbon,” she says. Multiply that by millions of secondary-growth trees over the areas she and 59 other researchers have studied and the numbers add up to a huge carbon sink.

For example, if all the secondary forests in Latin America in 2008 were allowed to grow for 40 years, they would be able to suck up all the carbon emitted in Latin America between 1993 and 2014, their study shows.

The investigation, led by Robin Chazdon of the University of Connecticut, considered Neotropical Latin American forests in Panama, Brazil, Costa Rica and Mexico. Other colleagues who were important contributors to the work include Eben Broadbent of the University of Alabama, Danae Rozendaal of U. of Connecticut and Lourens Poorter of Wageningen University. The study has involved about 60 researchers over 20 to 30 years working at 43 sites. It utilized measurements from 1,468 individual plots and more than 168,000 tree stems.

Gathering data to assess the carbon sink capacity of secondary-growth forests was “pretty low tech,” DeWalt says. Diameters of the trees were found using calipers for the smaller trees and diameter tapes for larger ones. Trees were measured at “breast height” or 130 centimeters above the ground. “Though whoever came up with that term was taller than me, since it’s certainly not at my breast height.” The diameter measurement location is often painted on the tree. A laser range finder can be used to get the tree’s height by shooting to the top and base of the tree. Increment borers are used to get a plug to weigh for determining wood density.

But measuring the sizes of individual trees isn’t always so easy.

“Some trees have big roots that flute out, so their measurements can’t be made directly at breast height. Then another measurement procedure must be used,” DeWalt explains. Rough terrain can also add to the difficulty of getting good tree measurements. “In some areas, the trees are on steep slopes. It can be hard to stay upright and get a good measurement.”

Allometric equations were used to estimate the biomass of each tree using tree stem diameter and wood density. Individual tree estimates were used to scale up biomass results for a given tree stand.

Forest ages across the Neotropics were inferred from calculations using local climatic conditions and biomass provided in a high-spatial-resolution map of forests made in the year 2008 and published by a separate team of researchers at the Woods Hole Research Center. This biomass map used LIDAR (LIght Detection And Ranging) data and field surveys to calculate above-ground biomass from MODIS (Moderate Resolution Imaging Spectroradiometer) satellite data.

From the ground, secondary forests and old-growth forests can be markedly different.

Younger forests tend to have thicker vegetation. An old-growth forest, on the other hand, may only have about 500 stems greater than 10 centimeters per hectare. Tagging, identifying and measuring the diameters of all trees over 10 centimeters in a hectare study plot can take a few weeks for a team of three people.

“There are a number of characteristics used to identify the trees: examination of the outer bark, inner bark, leaves, and sap color and viscosity,” says DeWalt. “Wood density can also vary a lot between tree species. The black ebony, for instance, has really high-density wood, whereas most wood has such low density it floats.” Daisy Dent of Stirling University in the United Kingdom. Dent is one of DeWalt’s collaborators on secondary forests in Panama. (Credit: Christian Ziegler)

DeWalt and colleagues found that secondary forests will continue to be important carbon sinks in the future. More and more forests in the tropics are secondary-growth forests.

The land use progression in the forest is predictable. Old-growth forest is cut down and removed so land can be used for farming. The farmland is eventually abandoned, and then secondary forests spring up.

“After old-growth forests are cut down, the farmland made from it just isn’t very good,” says DeWalt. “The soil quality isn’t like what you would see in, say, the U.S. Midwest. The soil in the tropics doesn’t retain nutrients very well.”

In the best-case scenario, fauna and forest patches are still nearby when an area cleared for farmland is abandoned. The animals can then transport seeds from the surrounding tropical forests and it is easier for a secondary forest to emerge from the former farmland.

The tree species present in a forest also affect how quickly it grows back, as does water availability and soil fertility. The natural climate makes some forests wet and others dry. Wet forests typically grow back faster. “By 20 years, in terms of biomass, a secondary forest can contribute anywhere between 25 and 85 percent of what the old-growth forest does,” says DeWalt.

DeWalt and others would like to extend their study to the Paleotropics, including Asia and Africa. They have been looking further into the biodiversity of secondary forests and their rate of transition into old-growth forests.

Some of DeWalt’s colleagues have been working with policy makers, attending climate regulation meetings and setting up collaborations with governmental and non-governmental organizations to try to get secondary forests more protections.

She mentions the importance of National Science Foundation funding in supporting their research efforts.

“There is a lot of value in conducting site-specific studies and doing the grunt work,” DeWalt emphasizes. “Without the different teams working across the Neotropics in secondary- and old-growth forests, the data would not have been available to be put together to estimate biomass and carbon across unstudied areas and to scale up to the level of whole countries and regions. That is how you get global impact. That is how you get something bigger than the sum of its parts.”