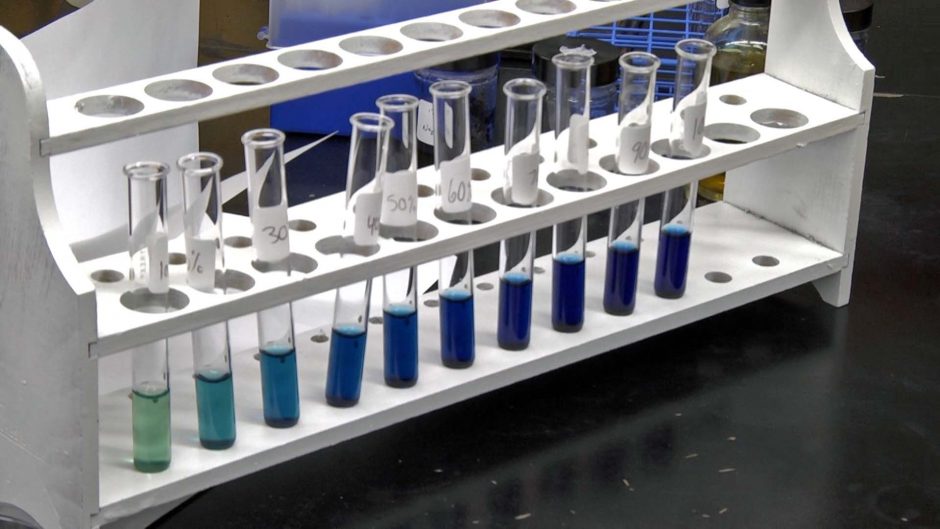 Reducing the color in water samples with lignin. (Credit: Cornell College, via communication with source)

Dr. Charley Liberko of Cornell College’s Department of Chemistry has an idea he’s working to bring to fruition.

“Imagine a remote village in an underdeveloped country whose only source of water is a stream contaminated with toxic levels of metal ions such as cadmium and nickel,” states Dr. Liberko. “The villagers take locally available woody plant material, soak it in potash, and heat it up for several days until the wood partially decomposes. They then filter their water through this material to remove the metal ions. When they are done with it, they put the material in a clay pot and heat it up even hotter until the organic matter decomposes completely, leaving the metal ion salts as a residue, safely in the clay pot.”

In other words, local people will have a viable way to remove toxins from their water, cheaply and relatively easily, using something that’s common and accessible: lignin. After cellulose itself, lignin is the second most abundant polymer on Earth, and Dr. Liberko and the Cornell team want to put the web-like polymer to work.

“I remember going to a chemistry seminar about biomass uses in underdeveloped countries, seeing a photograph of a huge pile of lignin, left over from the processing of coconut husks, and thinking to myself that there must be some use for all of this ‘waste’ material,” remarks Dr. Liberko. “Even though this is not the area of my training, seeing all that lignin made me interested in ways to produce something useful from it. Since lignin is fairly ubiquitous, we should be able to isolate it from most any woody material.”

Dr. Liberko explained to EM why he thinks lignin could be perfect for getting rid of metal ions in water, and what his team is doing to explore its possibilities.

Dr. Liberko has been considering the problem of toxic metals in water for a long time and is open to low-tech solutions.

“I have a colleague in the art department who is a member of a group called Potters for Peace,” details Dr. Liberko. “I was fascinated with their project involving potters going into remote areas, using locally available clay and organic matter, and showing the local people how to produce microporous filters to remove bacteria from water. I was also impressed with a project at our local church that purchased equipment to carry out solar-powered electrolysis of salt water to produce bleach to disinfect drinking water in remote villages in Haiti.” 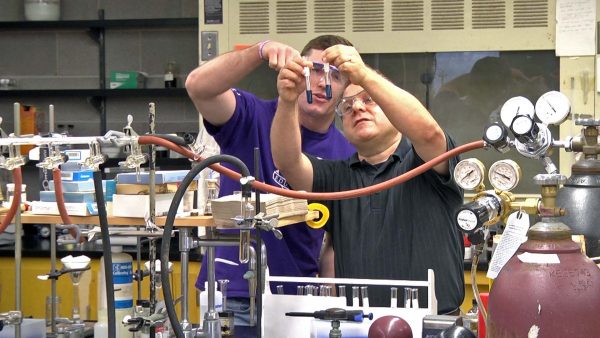 Student Ben Hewson and Professor Liberko in the lab. (Credit: Cornell College, via communication with source)

However, while these are two interesting examples of disinfecting water, they do not remove toxic metals.

“As I thought about the metal remediation problem facing some parts of the world, and the search to do something useful with lignin, it occurred to me that the two problems could be related,” comments Dr. Liberko. “Lignin is a polymer composed of units containing phenolic groups that have long been known to complex with metal ions. If we could somehow remove the cellulose, it should leave spaces for the phenol groups to form complexes with the metal ions.”

According to Dr. Liberko, there are reports in the literature of groups converting lignin into ion exchange resins as well as other interesting results, but he was looking for a way to achieve these kinds of results in remote areas with very little equipment.

“I began to research ways to decompose the cellulose and, hopefully, leave the lignin intact,” explains Dr. Liberko. “The data suggested that cellulose would begin to decompose thermally at a lower temperature than lignin, so we took some sawdust and put it in an oven. While untreated sawdust and sawdust that is simply dried in an oven, do not seem to have any particular ability to remove metal ions from water, the thermally decomposed sawdust does seem to be capable of removing metal ions from water.”

In fact, the team’s best results have shown that up to 90% of the metal ions in a test solution were removed.

A lignin “sponge” for metals

Lignin acts as a “sponge” with toxic metal contaminants, in part because it is a large polymer. Its groups feature oxygen atoms whose unshared pairs of electrons are attracted to the positively charged ions in metals.

“If the polymer can remain somewhat flexible, there could be several oxygen atoms in contact with each metal ion at once, increasing the attraction,” details Dr. Liberko. “This attraction will be even stronger if the polymer is exposed to a base such as sodium carbonate that will remove hydrogen ions from the phenol groups making them negatively charged and more attracted to the positively charged metal ions. We have found that pretreating the sawdust with sodium carbonate prior to thermal decomposition increases the amount of metal ion removed from the solution. We chose sodium carbonate over sodium hydroxide for this because the carbonate is safer to handle and can be obtained locally from potash.”

Although there are several instruments (such as AA and ICP) that can precisely measure concentrations of metal ions, Dr. Liberko and the team specifically designed the project so that it could be done without any instrumentation. Their goal was to allow researchers to join in the investigation even with limited resources.

“The metal ions that we have investigated so far can form colored complexes with the proper reagents,” comments Dr. Liberko. “For example, iron II forms a deep blue color called Prussian Blue in the presence of a hexacyanoferrate ion. The higher the concentration of iron II, the darker the blue color, so the intensity of the color can be used as a measure of the ion’s concentration. After allowing our lignin samples the chance to remove iron II ions from a test solution, we can take a few milliliters of the test solution, add hexacyanoferrate to it, and compare the intensity of the color to a series of solutions that have a known concentration of iron II. At this point we do not need very precise measurements; we are just looking to see what variables make the biggest difference.” 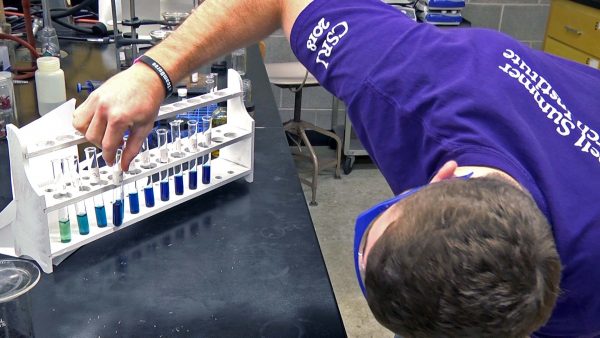 In fact, the team is developing multiple color-reliant tests for concentrations of different metal ions, hoping to refine the process so that less instrumentation is needed for participants.

“Copper II ion forms a deep blue color in ammonia so we have been able to use the intensity of that color to visually determine its concentration,” states Dr. Liberko. “Nickel II ion forms a pink color with dimethylglyoxime but this complex tends to precipitate out of solution making it a bit more difficult to determine its concentration reproducibly. Similarly, lead II forms a beautiful yellow color with iodide ion but once the precipitate settles out of solution, it is difficult to compare the color intensities of solutions of different concentrations. While there are many published and reliable procedures for measuring the concentrations of these ions, we are looking for ways to do it without instrumentation or a complicated procedure in order to keep the research accessible to those with limited budgets.”

“Lignin” itself is an important structural component of plants, and any such matter with a similar, woody structure that contains phenol groups should work for the team’s process—but this is where the team is hoping that other researchers will come into the picture.

“We have been working with a sample of mixed types of sawdust from my woodshop floor and have done a few experiments with newspaper, which has a higher lignin content than most paper,” remarks Dr. Liberko. “But so far we have only had a few students working on this over the last two summers. There are so many variables to test such as different kinds of woody material, methods to pretreat the sawdust before the thermal decomposition, time and temperature of the decomposition, and, of course, a whole periodic table full of different metal ions.”

This is exactly why Dr. Liberko designed the project to be able to be carried out with minimal equipment, and the team is now working on ways to measure metal ion concentrations without the use of expensive instrumentation.

“I believe that there are many students at small colleges and even high schools that will be able to participate in this project,” states Dr. Liberko. “The only way a project like this can be successful is with something similar to a data hub, where multiple researchers can share their information in real-time and integrate their results. The usual research paradigm of groups working competitively and sharing their results only after a long review and publication process is unlikely to allow timely progress to be made, especially if the researchers are concerned with getting their share of the credit. There is little possibility for patentability or large profit incentives, so it is unlikely to be pursued by industry. I would like to see a type of ‘open science’ process do for this project what data hubs did for computer programming.”

Obviously, this is a new area of research; there are many variables to explore, especially for a small undergraduate research group. 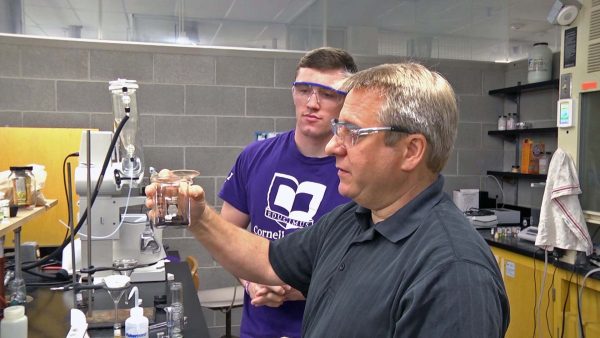 “We are spending a large amount of our time refining the visual color analysis of the metal ions,” explains Dr. Liberko. “We are looking for ways to take the color tests for metal ions and create paper test strips so that we could just put a drop of solution on a paper test strip and instantly estimate the metal ion concentration from the colors on the strip.”

The slow speed of thermal wood decomposition is also hampering the team.

“Our best results have come from sawdust baked in in an oven for 12 days,” states Dr. Liberko. “If we increase the temperature above 180 oC the wood completely decomposes. We are in need of finding a catalyst or other conditions to bring this decomposition time down while keeping in mind that our goal is to only rely on materials that will be available locally.”

While the work is in the very early stages of development, has not yet undergone peer review, and lacks enough data for publication, the team has been able to reproduce their initial results over two summers.

“My hope is that a few other researchers might take up this or a similar project and that a useful solution to an important problem will be found,” adds Dr. Liberko. “Lignin certainly seems to be one of the great untapped chemical feedstocks. Unlocking its potential is a challenging problem but the potential benefits are enormous.”