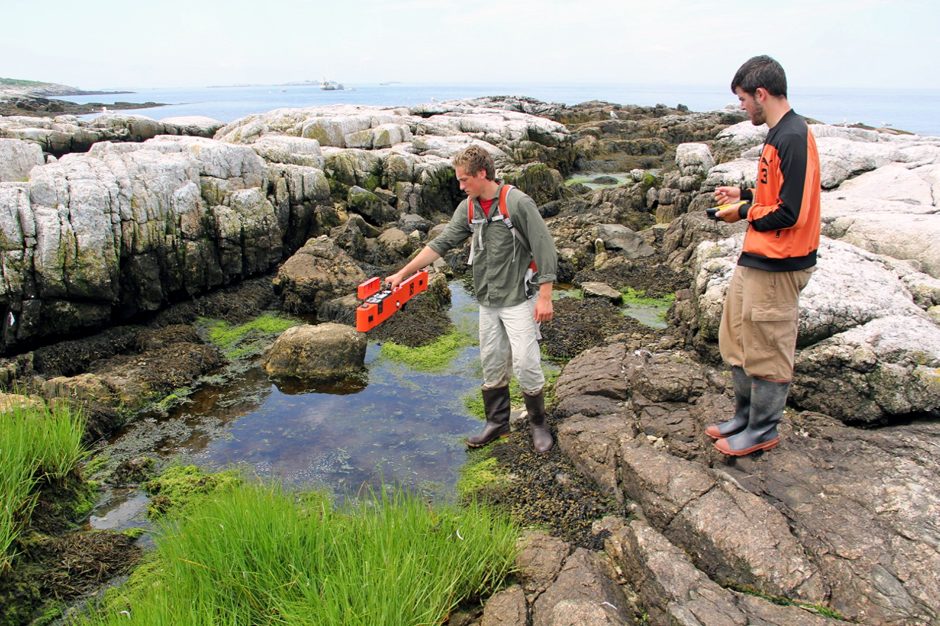 Located on Maine’s Appledore Island, the largest island of a nine-island archipelago six miles off the coast of New Hampshire and Maine, Shoals Marine Laboratory has been providing undergraduates from the University of New Hampshire, Cornell University and colleges throughout the US with unique coastal research experiences for over 50 years. Shoals Marine Laboratory was the first undergraduate-focused marine research institution and is still the largest in the nation.

“We offer roughly 15-20 collegiate-level courses each summer,” says Gregg Moore, Associate Research Professor and Academic Coordinator for Shoals Marine Laboratory, University of New Hampshire Department of Biological Sciences and Jackson Estuarine Laboratory. “We offer as many as four courses at any one time on the island, with each intensive course lasting two weeks.” Moore is heavily involved with teaching undergraduates and conducts a variety of research projects. “I’ve got vegetation and coastal salt pond/rare species monitoring studies on Appledore as well as larger projects spanning salt marshes and dunes and other coastal habitats of MA and NH. Most recently, I’m collaborating with partners in the British Virgin Islands to study mangroves following the devastating hurricanes Irma and Maria,” he notes.

The Shoals Marine Laboratory offers programs from May to August. There can be as many as 100 students on the island, and for the two weeks they are doing coursework and related research, they live on the island full time. 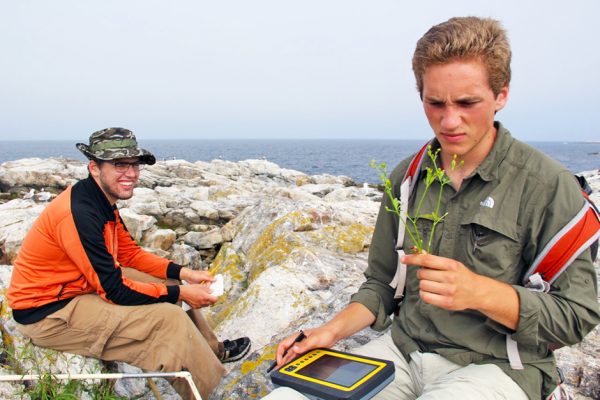 Moore mentioned some of the major long-term monitoring projects going on at Shoals. “We have an intertidal communities monitoring program that has been gathering data for over 50 years,” he says. “To complement the long-term intertidal study, we recently established a terrestrial monitoring array consisting of permanent, one square meter vegetation plots across the island. We use drones to map the island plant communities and will seek to use this data to track vegetation changes over time. Using the drones has really been a huge improvement in gathering data. It’s very rough, thorny terrain in many parts of the island, and I’ve even had to clear paths with a machete just to get to different areas and do mapping. The drones, on the other hand, fly above all of that. It’s much easier for them to get information.” They have several drones, such as the 3DR Solo and DJI Phantom, and others that are more expensive. “We can carry up to five cameras on some of them, which is a pretty good payload,” Moore adds.

“Once the imagery was mosaicked for RGB, we began a supervised classification to identify and quantify major vegetation zones and/or discrete plant communities using ArcGIS software interactive classification methods. This classification uses 60 georeferenced waypoints noting existing vegetation to the species level within the site’s photomosaic image to capture unique signatures (i.e., vegetation, bare ground, etc.). Additional refinements to the classification are being completed with ARIS Grid & Raster Editor, a third-party extension for ArcGIS, ArcMap software,” Moore explains. He credits The Nature Conservancy with giving him some good advice on mapping and collaborators at UNH’s Geospatial Science Center (GSSC). 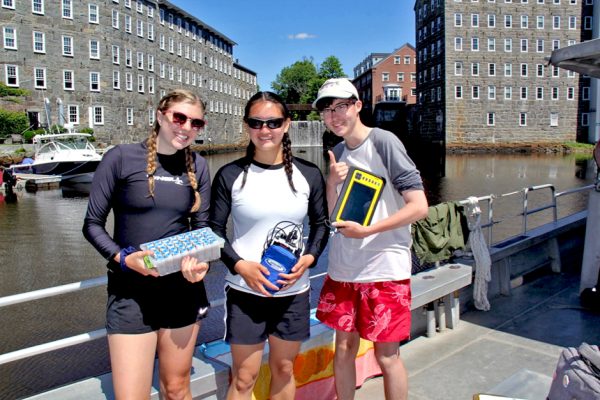 Shoals students hailing from Cornell, UNH and Oberlin College gathering surface water for analysis along a salinity gradient from the head of tide of the Lamprey River. (Credit: G. Moore 2018)

There are some rare plants on Appledore that are monitored with special interest. These include Dwarf spikegrass (Eleocharis parvula) and Red goosefoot (Chenopodium rubra). “We have about 300 vascular plant species here, and relatively few invasives – which we monitor closely,” Moore notes.

Another significant study effort at Shoals Marine Laboratory is soil salinity mapping. “We gather soil pore water data to make salinity contour maps, which help us determine which salinity certain species prefer. The mapping can help us identify pockets of hidden salinity in the coastal salt pond habitat or even among tiny pockets of vegetation trapped in the rocky, granite shore,” says Moore. “We have a unique and rare environment here at Appledore. Our coastal salt pond habitat can undergo fluid changes in salinity. It can go from freshwater all the way to polyhaline, which means there are some unique species that manage to survive and thrive here where many other species cannot,” Moore explains. “The environment maintains a seed bank, and at the right conditions, the seeds will germinate. You find there are species of vegetation, some waiting for a long time until suddenly the right conditions to emerge are there, and then you see them. They were there all along.”

One of the ways soil salinity is studied on Appledore is through electromagnetic induction (EMI). Pore water—water trapped in soil—is analyzed for conductivity and a specially developed algorithm is used to reliably convert the EMI values to salinity. Pore water apparent conductivity (ECa) was measured using electromagnetic induction (EMI) techniques with a Geonics model EM38 paired with a Trimble Nomad handheld data collector with a Garmin R1 wireless differential antenna. ECa measurements integrate conductivity values over the effective penetration range of the instrument, which in this case is approximately 0.5–0.7 m. Geo-referenced ECa data is collected continuously while walking meandering transects through coastal wetland habitats. Resulting conductivity data (mS/s) were converted to salinity (ppt) using an algorithm derived from prior work along New Hampshire’s seacoast (Moore et al. 2011). A salinity contour map was then generated in ArcGIS 10.2 using the inverse distance weighted raster interpolation function in ArcToolbox to illustrate soil pore water data obtained using EMI. When plotted, ECa measurements are particularly valuable for visualizing detailed salinity patterns on a landscape scale. The EM38 unit was calibrated on-site each day. In addition, direct measures of pore water salinity were conducted by means of the sipper technique (Portnoy and Valiela 1997) at 12 locations in coastal salt pond, using a hand-held refractometer as quality control for comparison to EM38 results. Subsurface pore water was sampled at two depths (10 cm and 40 cm). Direct salinity measurements, as well as those calculated from ECa, are reported as means ± 1 standard error.

Salt becomes trapped in the island sediment. The rare species that thrive there respond to the amount of salt in the environment, and they need to be close to the ocean. “They need the salt spray and the storm overwash, or in some cases, penetration of the sea through the porous rocky beach and into coastal pond depressions,” says Moore.

“The halophytes here are especially notable,” he says. “Little salt marshes are created via fissures in rock and what is interesting about those is, they have the same diversity as a large marsh you might see on the mainland. All your favorite salt marsh plants are there, but it’s all in a small area, some as small as a few square meters in size.”

Interestingly, some species that are common invasive species in many environments find the habitat on Appledore to be too harsh. “We don’t have a problem with the Common reed (Phragmites australis), which many nature reserves struggle with. In fact, we haven’t found any on the island – yet,” Moore adds. “We also don’t have much purple loosestrife or honeysuckle, but when we see these we actively remove them by hand pulling and bagging.”

In terms of water quality monitoring in the island’s only permanent freshwater pond (Crystal Lake), SML’s David Buck leads summer research interns using a YSI 566 multi-probe is used to gather the standard suite of characteristics, including dissolved oxygen, pH, conductivity and temperature. Dave’s team also employs fluorometers that measure chlorophyll A and phycocyanins as part of an ongoing monitoring program for harmful algal blooms and uses an enzyme-linked immunosorbent assay (ELISA) to quantify concentrations of microcystins in the water (toxins produced by cyanobacteria). 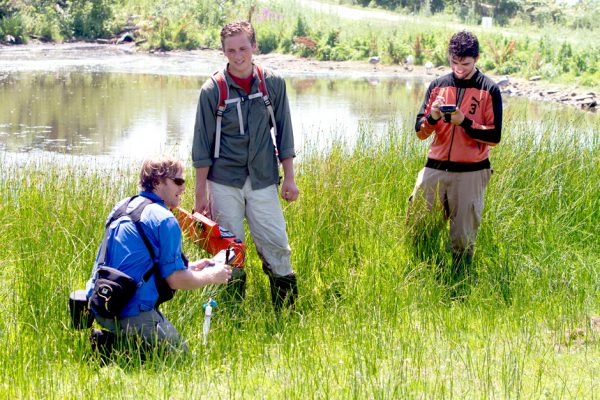 UNH students gathering calibration data for the Geonics EM38 prior to mapping salinity of the salt pond. (Credit: A. Brickett 2015)

As for Appledore fauna, there is a rookery of Greater black-backed gulls and Herring gulls, as well as muskrats and four species of snakes. Visitors to the island might encounter minke whales and harbor seals on the sail over, while larger cetaceans are just offshore. The Shoals also boasts a relatively large colony of common terns as well as endangered roseate and arctic terns on White and Seavey Islands where SML’s staff scientist Liz Craig manages an active tern monitoring program overseen by SML Director Jennifer Seavey in collaboration with New Hampshire Fish and Game.

Historically, the Shoals Marine Laboratory area was once a thriving center of the cod industry. “We had a huge fish industry here, complete with a grand hotel, and a famous author in residence, Celia Thaxter,” says Moore. Later, the cod numbers declined, and the island sat abandoned for years. “I’m told there are still cod out there, but only rod and reel fishermen are catching those today,” he adds.

While Moore’s research on Appledore is critical, he has another central purpose: to facilitate undergraduate opportunities for University of New Hampshire students. Most have declared majors, often in Biology, Zoology, and Marine Estuarine, and Freshwater Biology (MEFB), but students can come from any background as long as they have an interest in marine biology. “I introduce them to opportunities on the Island,” says Moore. “The students who have completed our courses on the island tell me it changes their lives. There is absolutely unbelievable student enthusiasm. It’s the equivalent of a full semester of work squeezed into two weeks. It’s a ton of work. But the students are up for it, and I love watching them rise to the challenge.”