Tides and microbes transform nitrogen where streams and the ocean meet

Enormous amounts of excess nitrogen hit water bodies all over the globe, including the U.S., due to runoff from agricultural and other human activities. This nitrogen can cause dead zones and harmful algal growth. Before it reaches the ocean, microbes can process and remove some of it from stream sediments, connected aquifers and tidal freshwater zones.  Thanks to this process, coasts can have a decreased likelihood of harmful algal blooms.

Keeping coastal waters clean is important for many reasons, including the fact that about 60% of the U.S. population lives on coasts. But despite the importance of these nitrogen processes, researchers have not fully investigated how they work. Beyond understanding exactly how microbes process nitrogen, researchers are looking into whether or not microbes can tame algal blooms and how humans can boost the effect.

Rebecca Barnes, associate professor of environmental science at Colorado College, studies and has published research on the way microbes process nitrogen, especially in tidal freshwater zones. Tidal freshwater zones are transitional environments between terrestrial and coastal waters, with freshwater chemistry and tidal physics. They don’t fit the classical definitions of either rivers or estuaries. 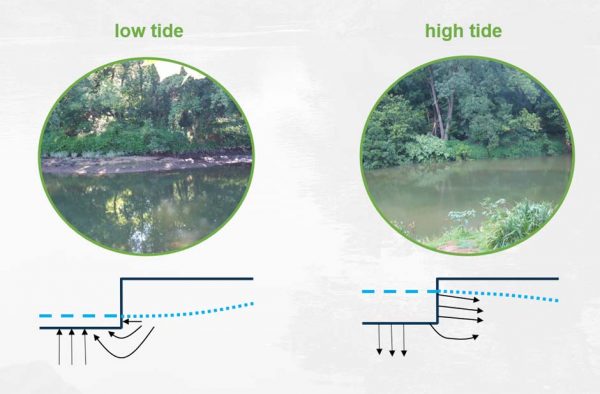 Photos of the research site at high and low tide with diagrams describing the water movement in and out of the streambed & bank. (Credit: Rebecca Barnes)

“Understanding how nitrogen is processed within tidal freshwater zones is important given that they can extend tens to hundreds of kilometers inland and the majority of people live in these coastal areas. Despite their importance and size, these regions are not well characterized in the literature or our models,” said Barnes. Barnes and her colleagues have since been working hard to fill in the knowledge gaps. “If we can understand these biogeochemical processes better, we can make better water resource and nutrient management decisions,” she said.

Work on filling in these gaps began several years ago. 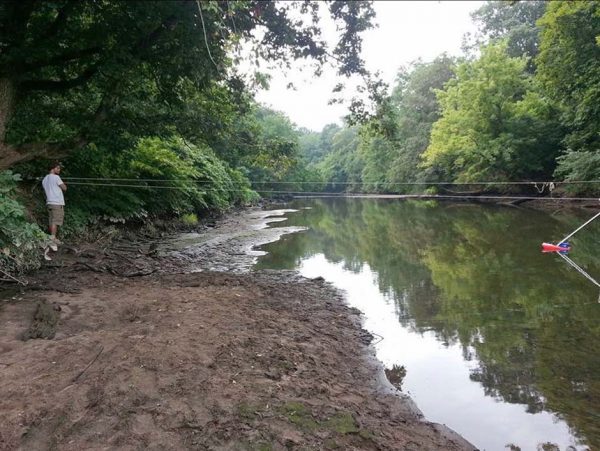 “Audrey Sawyer [associate professor of earth sciences at The Ohio State University ] contacted me in spring 2014 and basically asked me, ‘Will you be my biogeochemist?’“ Barnes recalled. “Audrey is a hydrogeologist but knew she would need a biogeochemist to partner with to complete the work. She brought preliminary data from White Clay Creek, Delaware and already had an idea of how water moved through sediment based on her prior research.”

“It kind of blew my mind when Audrey mentioned up and down movement in groundwater,” Barnes noted. “I hadn’t thought about that. Our goal was to investigate those tidal freshwater zone conditions others had so often left out of models when thinking about riverine nitrogen processes.”

Barnes and her team found undetectable to low nitrate concentrations in low oxygen environments of tidal freshwater areas, meaning denitrification was occurring as expected. However, in other tidal freshwater zone areas, they measured nitrate numbers that were quite high, meaning nitrification was definitely happening. This was a surprise for the team. While overall there was removal of nitrate, there were definite areas of nitrate production also. 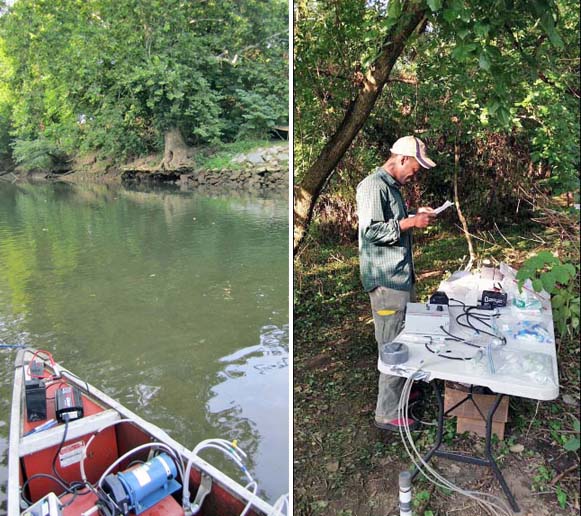 Studying nitrification and denitrification processes of tidal freshwater zones required using geochemical measurements and numerical models which ultimately showed tidal pumping leads to the rapid cycling of nitrogen in certain zones. Tidal pumping is the rise and fall of stream water with the tides. The changing water level can push more water into an aquifer. Water exchange between terrestrial and marine habitats happens largely because of tidal pumping effects. Tidal pumping also causes many types of chemical transfers in the intertidal aquifer, and powerfully influences marine nutrient loading. In tidal conditions with high oxygen, nitrification reactions reign. In low oxygen and high organic matter conditions, denitrification reactions predominate. “Generally we can say that denitrification takes place in conditions that are not aerobic, so microbes that don’t need oxygen will be doing that,” said Barnes. “But they’re not specialized microbes. Just about any microbes you find in a tidal freshwater zone are likely able to denitrify. As far as nitrification, which happens after organic matter is broken down, these microbes are a little more specialized than the denitrification ones, but seem to be fairly ubiquitous in these environments.”

As far as limiting harmful algal blooms, Barnes notes that controlling such a process is “a lot to ask of any one system.” Barnes and others have found that a system that is more clay rich and organic matter rich will likely be better at controlling harmful algal blooms than sandier systems. However, tidal pumping behavior could still be exacerbating nitrogen additions. 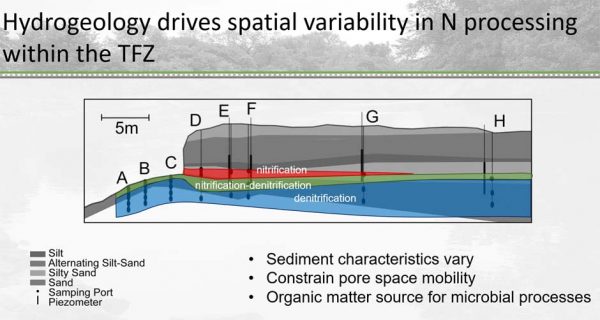 Figure illustrates the sediment structure around the streambed and the infrastructure used to sample water over the tidal cycle (White Clay Creek sits in the streambed on the left side of the figure. Wells A and B are submerged throughout the tidal cycle; Well H is approximately 30 m from the riverbank). Superimposed on the cross section are zones describing the dominant nitrogen processes occurring in that portion of the groundwater as determined by geochemical measurements and modeling scenarios. (Credit: Rebecca Barnes)

“The Mississippi drains 40% of the U.S., goes into the Gulf and causes low oxygen and dead zones. We also see these off the coast of China and in the Mediterranean Sea,” she explained. “While some of it is natural, the advent and widespread use of fertilizers starting in the middle of the last century, dramatically increased the rate of nitrogen export to coasts.”

As far as what humans can do to help prevent harmful algal blooms, Barnes mentioned that private homeowners have control over areas right up to tidal freshwater zones. Some strategies they can employ to cut down on harmful algal blooms include using less fertilizer, allowing native vegetation to grow near the water, and slowing the water down, making it seep into the ground instead of run off.

Barnes summarized, “As writer Mary Annaïse Heglar reminds us, we all have to ask, ‘What can we do next?’ We can all take small steps.”