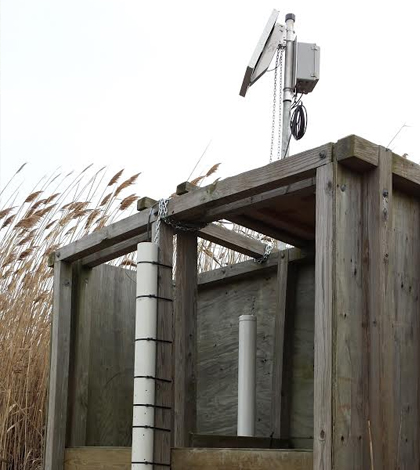 Getting things in place to monitor total suspended solids (TSS) around a dredging operation sometimes takes a quick turnaround. Just ask engineers at Tetra Tech who had short notice to get ready for tracking discharge out of a confined disposal facility (CDF) during the Avalon Back Bay Dredging Project. It’s entering what looks to be its final stage in 2016.

Back in November 2014, they got approval to monitor during one of the early stages of the dredge work. But by the time they secured it, there was barely more than a week to get preparations underway.

Luckily, they were able to rent the gear they needed just as dredging of areas in and around New Jersey’s Princeton Harbor began. This included a YSI EXO2 Multi-Parameter Water Quality Sonde outfitted to track temperature, conductivity, turbidity and depth as well as a central wiper to minimize maintenance. The sonde connected to a NexSens 3100-MAST Cellular Telemetry System, which logged data and transmitted back to stakeholders in real time.

It was really the only way that the project could move forward, crews tell us. The area being dredged was so remote that traveling to and from it to obtain water samples would have wasted a lot of time. Plus, lab results would take a few days to get back, which simply wouldn’t accommodate reporting requirements for the state. If the crew went over exceedance limits just once, the project would have been in jeopardy. Closeup of dredge material discharge. A sample of the dredge material pumped to the Avalon Borough Renewable Confined Disposal Facility was obtained along with a sample of the back bay water for use in calibrating the YSI EXO2. The dredge material was mixed with back bay water in various dilutions. The turbidity of each sample was measured with the YSI EXO2 and the sample sent to a New Jersey Department of Environmental Protection certified laboratory for total suspended solids (TSS) analysis. The NTU measured by the YSI EXO2 was then compared to the laboratory TSS results by linear regression, resulting in an excellent straight line fit. (Credit: John Gee / Tetra Tech)

“Once you register an exceedance, dredging was required to shut down,” said John Gee, principal engineer at Tetra Tech, a global environmental consulting firm. He described the CDF where dredge material was being deposited by an operator. “This approach was the way to go. It’s really remote, it took us a half hour just to get there. And it’s a wetland marsh, so at high tide you can’t get to it. You can take a boat or just wait till low tide.”

After they got the gear in and installed, it took about a week for the holding basin to fill up with dredged material and begin overflowing. That’s when they began tracking discharge from the CDF, hoping to keep things below a 35 parts-per-million limit.

Data from the sonde were recorded every hour by the logger, which transmitted them to project engineers, officials at the local township and even the captain of the dredging boat in real time through a NexSens WQData web datacenter. Managers were also able to set up an alarm that would alert them automatically if TSS levels went too high throughout the nearly two-month project, including work through Christmas Day. “It worked really well. We had data every hour instead of every day,” said Gee. “The borough engineer was thrilled.”

But the project did have a few hiccups, Gee tells us. The crew got close to one exceedance because the sonde would occasionally be out of the water due to variations in dredge flow. When out of the water, measurements of TSS were elevated.

“We should have put in a water level meter because we got an alarm on a Sunday,” said Gee, noting that no one was really in the mood for a site visit on the weekend. “We had some discussions. About half of us thought the unit was out of the water but no one was 100 percent sure. So we go down there, and it was out of the water. The basin had drained. When that happened, the unit read high values. It had nothing to do with the water.”

The addition of a water level sensor to the sonde would have been a big help. Getting such a sensor or a standalone water level logger wouldn’t have been too much of a stretch, as the cost of renting gear helped the Tetra Tech team to manage its budget really well. And tracking discharge in an automated way just made the work simpler on everyone.

“We probably saw a 50 percent savings in cost and it exceeded expectations for the state,” said Gee. “I’ve automated a lot of stuff and this is one of the easiest setups I’ve ever done … Any time you get the chance to automate, it’s better for the environment, it’s cheaper and it’s better for the client.”