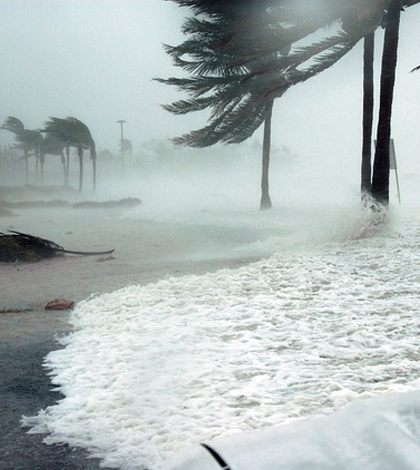 Many have experienced hurricanes, but few have probed inside, exploring their intricate inner mechanisms. Nick Shay, professor of ocean sciences at the University of Miami Rosenstiel School of Marine and Atmospheric Science and Benjamin Jaimes, an assistant scientist at the same school, are two people who have.

Using specially designed airborne expendable ocean profilers with special sensor packages deployed from a WP-3D Lockheed Orion aircraft capable of flights in heavy weather and even hurricanes, they have learned that what defines a hurricane isn’t just the winds and water above the ocean — it’s the water below the hurricane that determines its character and forcefulness.

The U. Miami group, in partnership with the National Oceanic and Atmospheric Administration, has been at work studying hurricanes for about 25 years, using Airborne Expendable Current Profilers (AXCPs) to study temperature, currents and depth down to 1500 meters. The AXCPs are dropped from the aircraft before, during and after a hurricane passes. The scientists gather baseline data about a week before and several days after the hurricane, as well as study the hurricane’s characteristics for every 12 hours or so while it is passing through a given area.

The entire team includes Shay, Jaimes, scientists from NOAA’s Hurricane Research Division, graduate students and 22 people involved with the aircraft flight crew. As Jaimes notes, the team has gained a lot of insight on how hurricanes work and how they gain strength. “We’ve learned that much of the power of the hurricane comes from the water below: There can be a downwelling of warm water from the surface in the warm core rings or eddies to provide energy to the hurricane,” said Jaimes. “Hurricane Isaac in 2012, for example, was energized by downwelling in the warm core eddy. We employ ocean sensors and atmospheric sensors because the atmosphere is affecting the ocean and the ocean is also affecting the atmosphere. You have to get your ocean information right if you want to get the storm information right.”

The sensors Shay and Jaimes use must be dropped at the correct time and in the correct place to give useful information, which requires detailed mapping of where the storm is expected to travel. The sensors typically provide data for about eight to 10 minutes, so placing them in the right place at the right time is critical. They sit in canisters about 5.5 inches in diameter and 2.5 feet tall. The modern sensors are made of plastic but were once made of aluminum. And they are one-time-use only: They drop into the ocean, sink to the bottom and are “scuttled,” as Shay calls it, or crushed by the pressure of the deep ocean.

As for how researchers know when and where to place sensor packages, Shay explains, “We have three radio frequency channels so deploying the right profiler at the right time is critical so we can get the measurement of the ocean features we need to improve our understanding of the process.”

Studying hurricanes has changed quite a lot over the years, Shay says. Before their group came along, the only information scientists were able to obtain on hurricanes was accidental. It came in the form of data obtained from a buoy that happened to be in the path of a hurricane.

Example of a sampling pattern during a research flight during the Deepwater Horizon oil spill. (Credit: Benjamin Jaimes / U. of Miami Rosenstiel School of Marine and Atmospheric Science)

“AXBTs (Airborne EXpendable BathyThermographs) have been dropped since the early 1970s,” said Shay. “Peter Black with NOAA’s Hurricane Research Division contributed to these deployments. Subsequently, in the 1980s, Tom Sanford at the University of Washington Applied Physics Laboratory built expendable electromagnetic sensors for AXCPs that measure ocean currents along with temperatures.”

Shay recalls that Sanford’s group deployed AXCPs in Hurricanes Norbert, Gloria and Josephine with oil company funding for the NOAA WP-3D. There was another turning point in 2004, as the APL group placed the same type of sensor package into a profiling float that measured the ocean current response during Hurricane Francis as part of an Office of Naval Research project.

As Shay explains, “The advantage of that development was the float went up and down in the water column so measurements of temperatures, salinity and current were acquired throughout the upper ocean to depths of 500 meters. These types of floats are now available at Teledyne Webb Research. Along with the expendables, these new floats are what we are using and they can be recovered from a ship.”

The group developed the Ocean Heat Content product suite that uses radar altimetry from satellites to find and track the warm eddies that can be the key to a hurricane’s power, as they found during Hurricane Opal in 1995. This suite was transitioned to operations at NOAA’s National Environmental Satellite Data Information System.

Much of the information the group generates goes towards research to aid understanding and predictions for weather phenomena such as hurricanes. For example, their knowledge aids the National Center for Environmental Prediction towards improving models.

Shay emphasizes, “It’s not just getting good data that’s important; it’s about getting useful data to improve oceanic and atmospheric forecast models, which will ultimately save lives and property.”