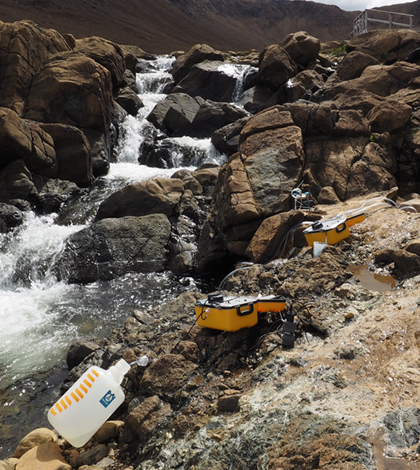 This process is underway in many places around the world, and researchers at the University of Utah are working to better understand it as well as the extremophile lifeforms that reside in the water bodies nearby.

In one investigation, scientists at the university are sampling along the Tablelands Ophiolite in Canada’s Gros Morne National Park. Ultramafic rocks at this site, marked by low silica contents and rich mineral levels, are undergoing serpentinization and playing a role in the creation of highly basic natural springs that vent hydrogen and methane gas.

At this site, researchers gather samples of water from streams and groundwater in a bid to further document the conditions that support microbial lifeforms in some of the surrounding springs. Gear commonly used in this effort include a YSI Pro Plus water quality meter and a flow cell.

“We study natural microbial communities with environmental DNA and RNA sequencing techniques. In order to interpret variations in the large molecular sequence datasets, we need to be able to precisely track the environmental characteristics of our samples,” said William Brazelton, microbial ecologist at the University of Utah. “Therefore, while we collect microorganisms from the environment, we use the Pro Plus to track temperature, pH, DO, ORP (oxidation-reduction potential) and conductivity.” Combining the measurements of pH, DO and ORP are especially important for projects he’s working on that involve subsurface and potentially oxygen-starved groundwaters. Using the flow cell during sampling, Brazelton says, allows for continually tracking the parameters and then pinpointing whether the microbes his team is collecting are more likely derived from groundwater or from sources of water on the surface.

Some of his helpers in the work include students at the Memorial University of Newfoundland as well as U. of Utah. One interesting question that they are trying to tackle covers how lifeforms in the pools are living given the extreme, basic pH levels recorded there.

“The chemistry data provides important context for understanding what kind of environments are supporting the growth of these novel, uncharacterized microbes,” said Brazelton, who is surprised that pH levels at the Tablelands are regularly recorded over 12.

Brazelton is collaborating with many other researchers in the work. A lot of them, he says, use similar sampling setups to gather their specialized data.