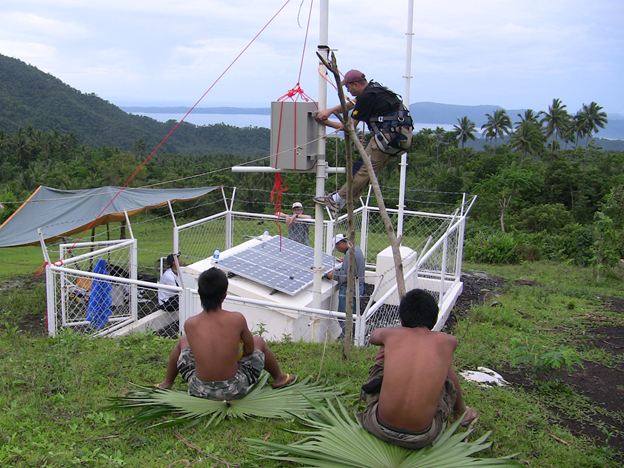 Florian Schwandner, UCLA project scientist and NASA Jet Propulsion Laboratory research scientist, is part of a team tasked with monitoring terrestrial CO2 using ground measurements and an advanced satellite called Orbiting Carbon Observatory-2 (OCO-2). The idea was to gather CO2 data on a regional, continental or ocean basin scale, looking at carbon sources and sinks using continuous sampling to get input for carbon cycle models. While OCO-2 was very successful at sweeping the globe and gathering the much-needed CO2 information, it also had a welcome discovery in store for Schwandner, a volcanologist, and his colleagues.

“It was giving us the data we wanted, but then it went above and beyond that. The OCO-2 instrument was so good, it allowed us to get point measurements of individual CO2 sources. We could actually track CO2 from individual active volcanoes from the satellite. That speaks to the advanced capabilities of the satellite and led to our study we recently published in Science,” said Schwandner.

A previous satellite called Greenhouse Gas Observing Satellite (GOSAT) was launched in 2009. Like OCO-2, it also takes CO2 data, but GOSAT is only capable of individual measurements (individual footprints) of a 10.5 kilometer elliptical area. OCO-2’s data capture is a significant improvement: it takes a continuous strip of data using roughly 2.25 kilometer sized spatial footprints, giving better spatial resolution and context. Every 1.5 kilometer a new set of footprints is recorded, like a paint stroke across the earth. Each “paint stroke” (swath) is eight footprints across and about ten kilometers wide.

Schwandner works with both OCO-2 and GOSAT data, along with the Japanese GOSAT team. “We have found that the data from the ground and satellite match up well,” he says. They use a suite of products to assess atmospheric information. For example, they use Keyhole Markup Language (KML) type files to display OCO-2 and GOSAT data in an Earth browser (such as Google Earth). All products, including the KML files, are publically available. “Measuring point CO2 emissions with a satellite is challenging because the background of CO2 in the atmosphere is pretty high,” says Schwandner. The current background CO2 level is 400 ppm. “Not only is it high, but it gets higher by about 2 to 3 ppm every year,” he says. “To see CO2 emissions from a volcano from space, when faced with such a high background, we have to be able [to] achieve a measurement error as low as 0.25 percent or less. Against all odds, we are able to do measurements that precise with OCO-2.”

OCO-2 is able to deliver such precise measurements due to three grating spectrometers with three spectral ranges, projecting on three focal plane arrays (imaging elements). Schwandner and colleagues also make use of the fact that half of each of the about 15 satellite orbits per day cross both the sunlit and the dark side of Earth, from pole to pole. Only measurements taken on the sunlit side of each orbit are used for science, and measurements during each orbit’s dark half are used for calibration. The CO2 measurements are based on the spectral absorption of CO2 using surface-reflected sunlight, averaged throughout the entire column of air that the light passes through. In the dark, there’s no sunlight to interact with CO2 molecules. The detection method uses wavelengths in the infrared, with two bands being characteristic of CO2 and a third band characteristic of oxygen in the air, which allows the researchers to assess how much air the light passed through (the air column), which is required for the measurement. Multiple scattering effects of clouds are also taken into account when evaluating the information obtained by the satellite. “It takes a lot of effort to get high quality data,” says Schwandner.

The CO2 emissions from volcanoes are localized phenomena which allows researchers to clearly see the signal contrasts between the volcanoes and surrounding areas. The formation of volcanic emission plumes in the atmosphere follows the basic laws of physics, so their persistence and behavior is largely predictable.

In terms of differences between Northern and Southern hemispheres, Schwandner and his colleagues find that atmospheric CO2 concentrations in the Southwest Pacific region are very homogenous compared to the Northern regions. “There is more industry in the North and more land mass breathing,” he says. “It is easier to do detect [sic] volcanic emissions in the South, where there is less interference.”

Generally speaking, Schwandner is able to get the highest end spectrometric data on CO2 and other measurements via satellite and ground instruments due to a large community network of scientists, such as those at Caltech (who started the TCCON network), NASA’s Armstrong Flight Research Center, NASA AMES and the Japanese GOSAT team. “It is a large and very important effort. While you might think volcanoes are responsible for putting high amounts of CO2 in the atmosphere, it is actually humans who account for most CO2 emissions. Of those, over 70 percent of anthropogenic emissions are from urban areas, and most of that is likely from traffic,” says Schwandner. OCO-2 can see a very big difference between urban and rural areas of Los Angeles, for example. It is also sensitive enough to detect CO2 differences in various parts of urban LA.

Schwandner and his colleagues’ major goal is to detect atmospheric CO2 variability associated with point sources of CO2, within and outside of cities. Their hope is that other researchers use their data to improve existing carbon cycle models. “Humanity emits about 40 billion tons of CO2 per year globally, and we have found that volcanoes are responsible for only about 600 megatons globally,” he says. The amount of CO2 people put into the air is orders of magnitude more than the 450 or so active volcanoes around the globe.

In 2019, OCO-3, an advanced satellite with even better targeting capabilities, is expected to launch. “We will get better pointing optics with OCO-3, which will allow us to examine CO2 in cities even more closely and for a longer time each time we look,” says Schwandner. “We hope to also look at seasonal differences and do an even better job at detecting individual volcano emissions.”

Schwandner and colleagues plan on conducting advanced global point source CO2 observations from space for many years to come. They will continue to work hard toward producing the data that help improve the existing global carbon cycle models.