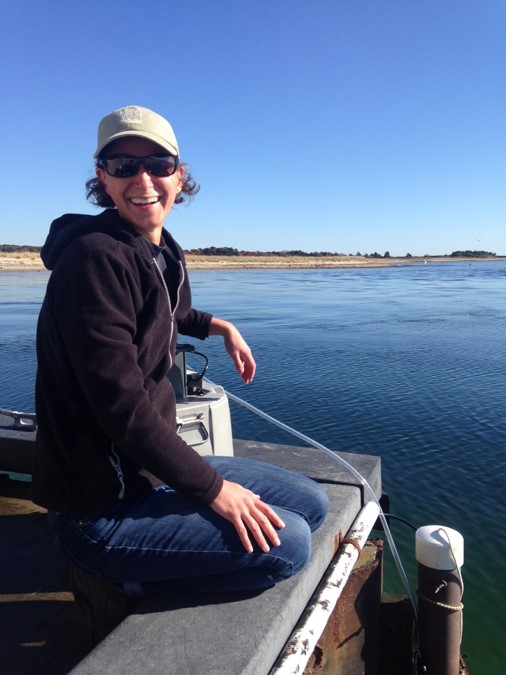 “We joke that we’re the Center for Boardwalk Excellence,” says Megan Tyrrell, Research Coordinator for Waquoit Bay National Estuarine Research Reserve (NERR). “One of the unique things here is we have a great system of boardwalks that were built by NERR staff and volunteers. The boardwalks make it much easier for us to do salt marsh monitoring. We’re lucky to have such an extensive system.”

Tyrrell has only been in her research coordinator post for a year and a half, but she is no stranger to the NERR system, having also done a postdoc at Wells NERR and a graduate student fellowship at Great Bay NERR. “All the NERRS use the same water quality, nutrients and meteorological monitoring protocol, so that makes it possible to compare data from NERR to NERR. That’s very valuable from a research perspective,” she says.

Like other NERRS, Waquoit Bay scientists use System Wide Monitoring Program (SWMP) protocols. SWMP water quality and nutrient monitoring are performed at four sites at Waquoit Bay NERR. Jordan Mora is the full-time Research Associate and SWMP data wrangler for the Waquoit Bay NERR. Waquoit staff are currently using both YSI 6600 series sondes to collect SWMP data but are transitioning to the newer EXO2 sondes. With the sondes they obtain water quality data such as: temperature, water depth, salinity, pH, dissolved oxygen and turbidity. Water level is recorded, but the four SWMP stations are not tied to a stable vertical benchmark, so absolute water levels are not yet known for these sites. They also obtain information on: ammonium, nitrate, nitrite, ortho-phosphate, chlorophyll a, silicate, and total and dissolved organic nitrogen.

Meteorological monitoring, part of SWMP, is also performed with a Campbell Scientific weather station, at a tower adjacent to an old estate Carriage House building. “It’s one of the special places we have at Waquoit Bay. The NERR facilities were built on an estate dating from the 1800s,” says Tyrrell. The weather station monitors air temperature, wind speed and direction, barometric pressure, relative humidity, precipitation, photosynthetically active radiation (a component of sunlight relevant for plant growth) and atmospheric conditions.

One SWMP station has an all year round sonde. Others are taken out in the winter, when bubblers are placed or when boats are pulled from the water to avoid damage in winter storms. In addition to two SWMP sites, there are seven other water quality sites, which are sampled by volunteers from June until September. Three of the sites are accessed year round. Waquoit Bay also participates in salt marsh monitoring and submerged vegetation monitoring (SAV) as a part of the NERR sentinel sites program, which helps in assessing vegetation changes in response to sea level rise, nutrient loading and other stressors.

Volunteers, it turns out, are a very important part of the efforts at the NERR. “We have a mix of people. We don’t get a whole lot of students, but we do have quite a few retirees, including a retired meteorologist who has been very helpful,” says Tyrrell. The BayWatchers volunteer program, active at the Waquoit Bay NERR, typically has about 10 to 12 volunteers. Volunteers in the various Waquoit Bay NERR programs perform a variety of functions such as obtaining grab samples, prepping SWMP data and monitoring groundwater wells. One volunteer does turbidity analysis. Volunteers also participate in salt water marsh monitoring, where about five or six volunteers record data and carry equipment. Waquoit Bay also has some unique wildlife that doesn’t appear at every NERR. “We have horseshoe crabs, though the monitoring for those isn’t being done by our NERR. We have a special rabbit, the New England cottontail. We have brook trout, the only trout native to eastern North America. We have ospreys, which have made a real comeback since DDT was banned. We also have small stinging jellyfish, also known as the clinging jellyfish or Gonionemus vertens, which tend to start showing up in April. There was one incident where they were trapped in someone’s wetsuit and the stings were actually causing respiratory problems. But that’s very unusual,” Tyrrell says.

Perhaps more so than other NERRS, Waquoit Bay has been very well-studied. This is likely because it is located near the town of Woods Hole, affiliated with the famous Woods Hole Oceanographic Insitution, at the elbow of Cape Cod. “There’s lots of expertise here,” says Tyrrell. Since it has been the subject of so much study, there is a lot of data on protected parcels in the Waquoit Bay area and how they have been affected by nearby development. The decline of eelgrass in the area has also been well-documented, as well as increased nutrient loading due to development. As a result of these changes, water quality has also declined due to development. Ivan Valiela, in particular, was well-known for documenting long term trends in the Bay. “One of his most notable publications ties the loss of the eelgrass in the Bay to increased nutrient inputs associated with development,” Tyrrell notes.

In addition to the decline of eelgrass and decrease in water quality over time, as observed by Valiela, Mora has looked at oxygen concentration over time and shown how oxygen levels in the Bay have declined as well. “We’ve also seen an increase in late summer and fall temperatures, which seems tied to climate change,” says Tyrrell. BayWatcher volunteer data has also shown increased nutrient levels in the water, a common result of development runoff. “You tend to get septic system leaching of nitrogen species into the Bay, which in turn leads to algal growth,” explains Tyrrell. Despite being a well-researched subject, the Bay has still managed to surprise Tyrrell sometimes. “I was surprised by the rapid decline we’ve been seeing in salt marsh vegetation,” she says. “Some species aren’t as tolerant of salt marsh flooding. In the past seven years, we have seen several of the flood tolerant species decline–this is a short time span of monitoring data to detect this type of change, yet it is apparent at our site”.

Though much research has been done on Waquoit Bay, Tyrrell finds there is still much more that needs to be explored. “It’s fun and challenging to be part of a NERR that’s been so well-studied. Definitely some notable scientists have been present in the audience whose data I’ve used,” she notes. “We are always learning from each other, and there’s always more to learn.”

Something else Tyrrell enjoys is the great impact of the research done at the NERR on the lives of many. “From scientific to commercial to recreational, there are many uses for our research,” she explains. “Anything from understanding vegetation trends to planning a paddling trip, our SWMP data is there for the public to use as they see fit. And a lot of people use it. I’m proud to be part of that.”