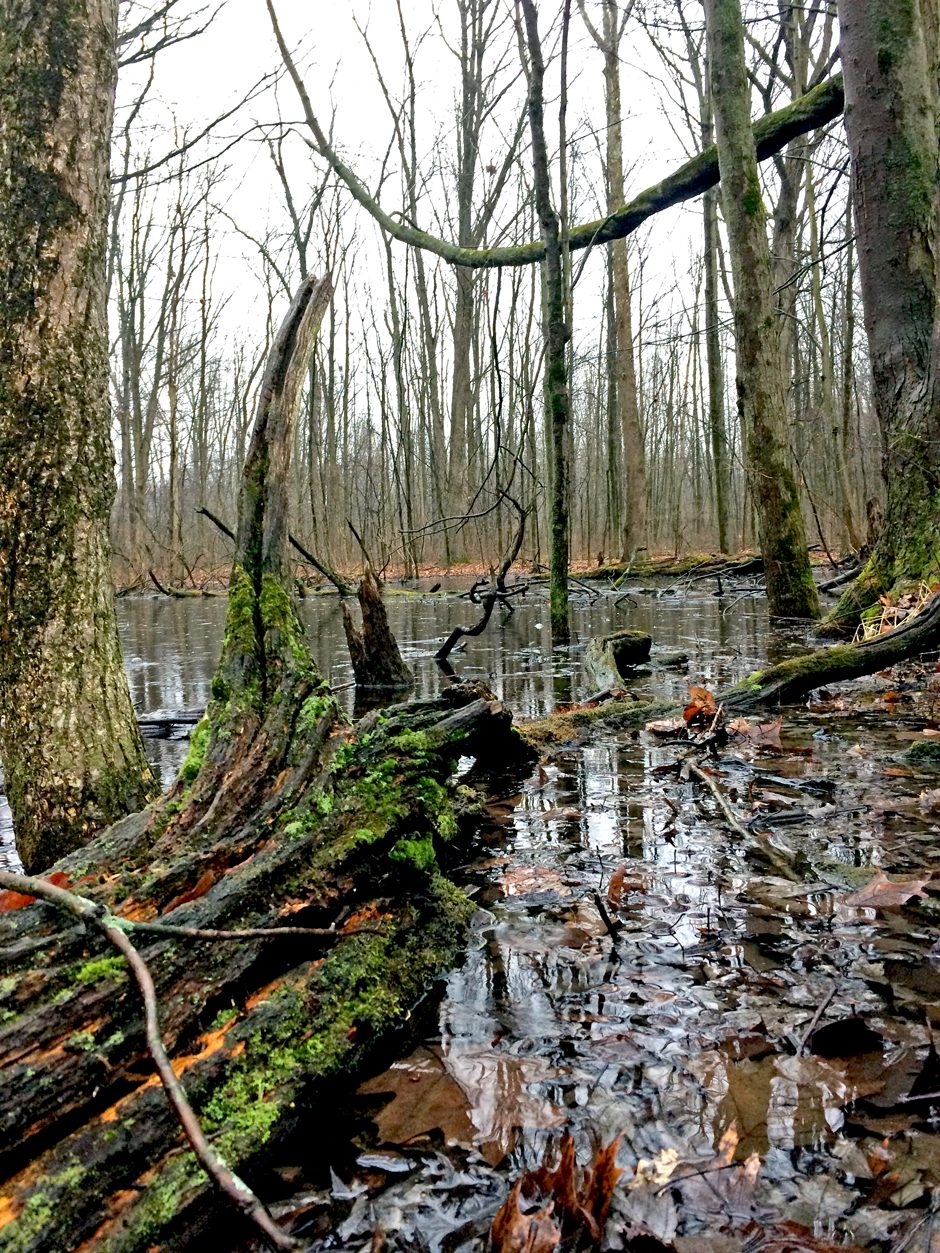 Jonathon Schramm, Associate Professor of Sustainability and Environmental Education as well as Director of the Institute for Ecological Regeneration at Goshen College, has spent the past seven years exploring the natural wonders Merry Lea has to offer.

“We’re a 1,200-acre preserve in northern Indiana, and it lies at the headwaters located of the Elkhart River watershed,” Schramm notes. “By being in the headwaters, we affect the area in broad ways.” The headwaters contribute to the lakes, numerous wetlands and tributaries at Merry Lea.

“Merry Lea has been part of Goshen College for 40 years,” says Schramm. “In the late 1960s, a local movement developed to try to preserve some of the natural habitats native to this area. Much of the land in this area had been or was still being farmed, both pastures and row crops. Lots of natural wetlands had been drained to make the farmland. Now, years later, we are trying to return to normal hydrology.”

Returning to normal hydrology has involved the making of small levees and lightly managing previously-farmed wetlands. “We’ve been trying to focus on ecological outcomes instead of focusing on our chemical data,” says Schramm. 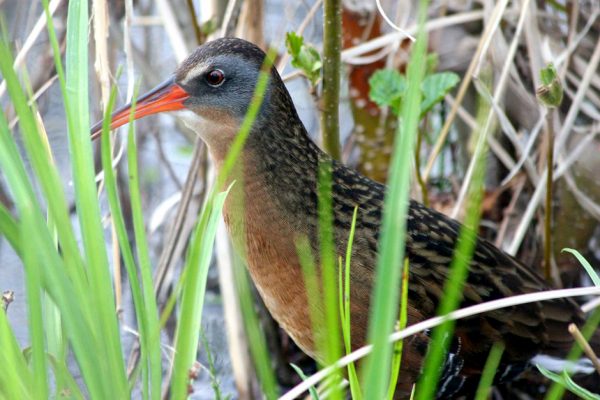 A Virginia rail (Rallus limicola) hides among the vegetation along the shores of High Lake, in a recently restored lakeside marsh (Photo Credit: Jennifer Schrock)

That being said, chemical data has been taken on the various water bodies on the property, including nitrates, phosphates and dissolved oxygen data. In the 1990s and early 2000s, Hach kits were used to gather chemical data. “For selected studies of iron, phosphates and nitrates over the years, we’ve used the Hach AccuVac colorimetry system. Not during my time, but in the past, some researchers have used HydroLab DataSonde 4a units for diverse water quality variables at depth in our larger lakes. Another surface probe we’ve used is the Hach DREL 2010 Water Quality lab kit. The main “workhorse” YSI probe that we use a lot (and is also used for the Indiana Clean Lakes monitoring program) is model 550A,” says Schramm. Goshen student projects have involved collecting data using the YSI probes and colorimetry for iron data. One of the student projects looked at the effect of iron from ground source heat pump water on the wetlands.

Handheld equipment is used for most data monitoring. However, buoys made in house are used for zebra mussel monitoring. Plastic plates are hanging in series in six feet of water by the shore. Zebra mussels affix to them and can be counted. “The mussel monitoring buoy I mentioned was homemade, with a simple design based on generic aquatic recruitment measurement traps,” Schramm explains.

The Indiana Clean Lakes program monitoring program has been going on for 30 years, with Merry Lea participating for the last 12 years at least, in coordination with the state of Indiana. Merry Lea has been gathering turbidity data and conducting monthly monitoring with YSI equipment for the program. 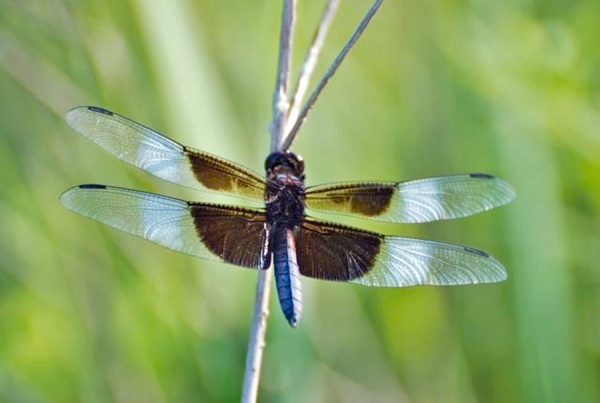 The oldest wetland at Merry Lea has shrub carr– a wetland habitat dominated by tall shrubs–and buttonbush swamp. It has never been drained. Of the previously farmed areas, marshes and open water systems have been restored at Merry Lea.

Merry Lea has proven to be an excellent nesting ground for wood ducks, who like wetlands with a forested boundary. There are also nesting ruddy ducks, golden eyes and mallards. 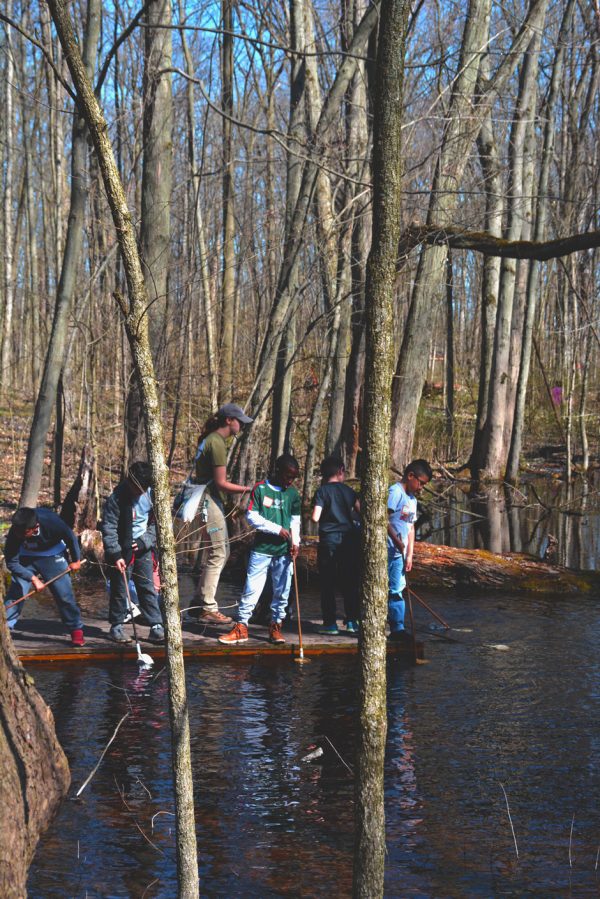 Another major plant species under restoration and management at Merry Lea is tussock sedge (Carex stricta), which accumulates sediment around their root bases and offer habitat to other species that prefer slightly drier soils.

Water drainage influences the character of many areas in Merry Lea. “In 1899, a large farm drain was dredged that lowered water levels around the property by 6-8 feet. Our systems are still affected by that,” says Schramm. “For instance, that created a shallow bay at the north end of High Lake with a floating mat of bog-like vegetation. Although never a true bog, the predominant habitat went from acidic tamarack to maple swamp. Glacial relict species still predominate.” Glacial relict species at Merry Lea include wiregrass sedge and pink lady slipper orchids. Bear Lake prairie emerged during that same period of drainage, and a special soil was left behind by the lake as well: marl. “Marl is a unique soil created when sand and gravel from a glacier is modified by shellfish and calcium carbonate,” says Schramm. “It has unique vernal effects and unique drainage properties. It retains water early in spring, but dries out thoroughly in summer.”

Some current monitoring and restoration projects at Merry Lea are the restoration of sedge meadow at High Lake–a former Tamarack area, being undertaken by Minter– and a few environmental education graduate student projects, including amphibian monitoring.

“The amphibian community here is very special,” Schramm notes. “We have abundant headwaters that are very clean, lots of vernal pool formation and good foraging areas around our ponds, which are very important factors for amphibians. We have spring peepers, wood frogs, cricket frogs, chorus frogs, leopard frogs, green frogs, bullfrogs and several salamander species. We have wonderful diversity here now that the many of the wetlands have been restored. In many remnant wetlands around here, you can only hear one or two types of frogs chorusing, if any, but here at Merry Lea you can hear four or five at the same time.” 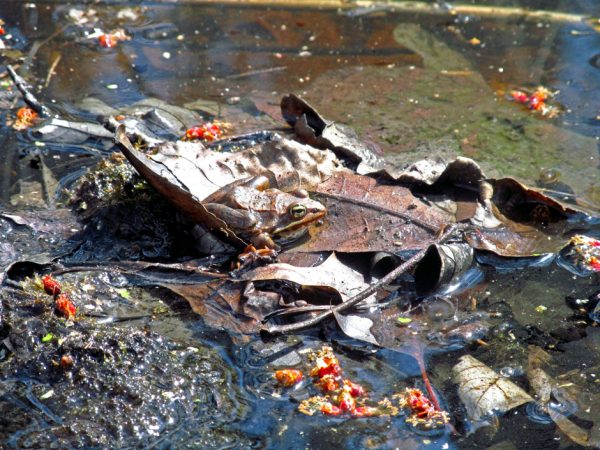 There are undergraduate environmental science and biology majors doing projects at Merry Lea as well, such as those involving sedge meadow monitoring. There is also some student fish work. Student projects are being performed on a year-round basis. Several senior theses are in the works, including a study on mosquito diversity that involves collecting mosquito larvae.

“Our vernal systems change throughout the years, and we are especially influenced by the freezing and thawing rhythms in winter, which changes our vernal pools in early spring. We are also heavily impacted by fall precipitation, especially if the fall precipitation is low,” says Schramm. “In late summer and early fall, you can see changes with the lead-back (lungless) salamander, for example, based on the precipitation. If there is enough precipitation, their eggs are submerged in winter and survive. Otherwise, they won’t. Or, rains can be too heavy in winter, and that isn’t good for their populations, either.”

Although he has worked there for seven years, Merry Lea still has the ability to surprise Schramm. “I was surprised at how native plant species returned after wetlands restoration that we did not plant, such as in the sedge meadows,” he recalls. “The plants were just waiting for the right conditions to return.”

Not only was Schramm surprised by the native plants that returned so quickly once restoration of the habitat had occurred, but the frogs returned at a surprising rate as well. “I was amazed that they came back to breed so quickly. The first springtime after our meadow restoration, we went from only hearing spring peepers, who can use the invasive reed canary grass habitat that used to be dominant in the meadow, to hearing four or five different species of frogs chorusing. It really goes to show how small changes in the aquatic habitats can have a big impact on species,” Schramm reflects. “It shows the power of small differences in a natural environment.”