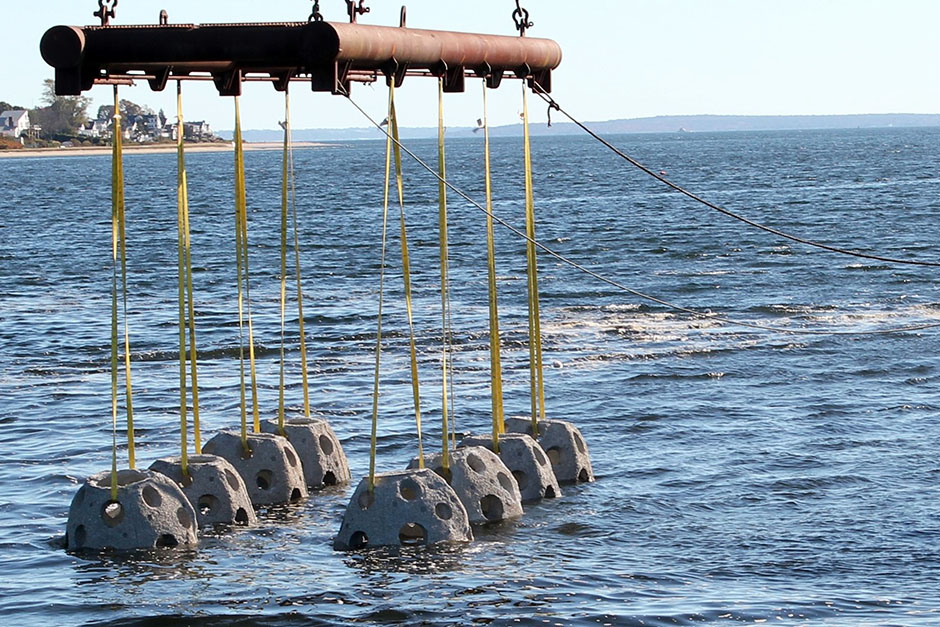 In 2019, TNC and RI DEM installed 64 Reef Balls to enhance fish habitat off Sabin Point in East Providence, RI. It was the first artificial reef to be constructed in upper Narragansett Bay (Credit: Tim Mooney / TNC)

Anyone who has spent a significant amount of time in nature can likely relate to feeling connected and defensive toward protecting the environment. Heather Kinney, a coastal restoration scientist with The Nature Conservancy in Rhode Island, knows this feeling well, having felt a deep connection to nature her entire life. “I have always had a deep love for nature and the environment, particularly being out on the water and being drawn to the ocean, as cliché as that sounds,” says Kinney.

Being so close to nature her entire life led Kinney to pursue a career in conservation and restoration. “You want to protect what you love, and I think that once I fell in love with it- it was something that I wanted to be able to pursue professionally,” she explains. Kinney focuses most on coastal and marine environments because of how vulnerable the habitat is. She adds, “So much of the marine environment from specific organisms to marine habitats are threatened by our current way of life. Because I studied marine biology, I got interested in learning about them and then interested in protecting them.”

Kinney’s work with TNC focuses most on restoring rocky shorelines, oyster reefs and oyster habitats, but she works throughout Rhode Island, particularly on the Providence River and the surrounding wetlands. Kinney helps facilitate TNC’s fish and oyster surveys as well as the restoration plans that follow these initiatives.

Kinney has spent the past 5 years working with TNC, maintaining equipment, conducting research and leading projects throughout Narragansett Bay. Most of her work involves overseeing and checking in with all the projects occurring within the Rhode Island chapter of TNC. Many of the longer-running TNC programs and projects rely on continuous monitoring to ensure that these initiatives succeed in their goals. Some of this continued monitoring entails monthly fish trapping to analyze population and species disbursement. The fish traps allow scientists like Kinney to ID and measure the species before releasing them to learn more about the species and ecosystem needs. 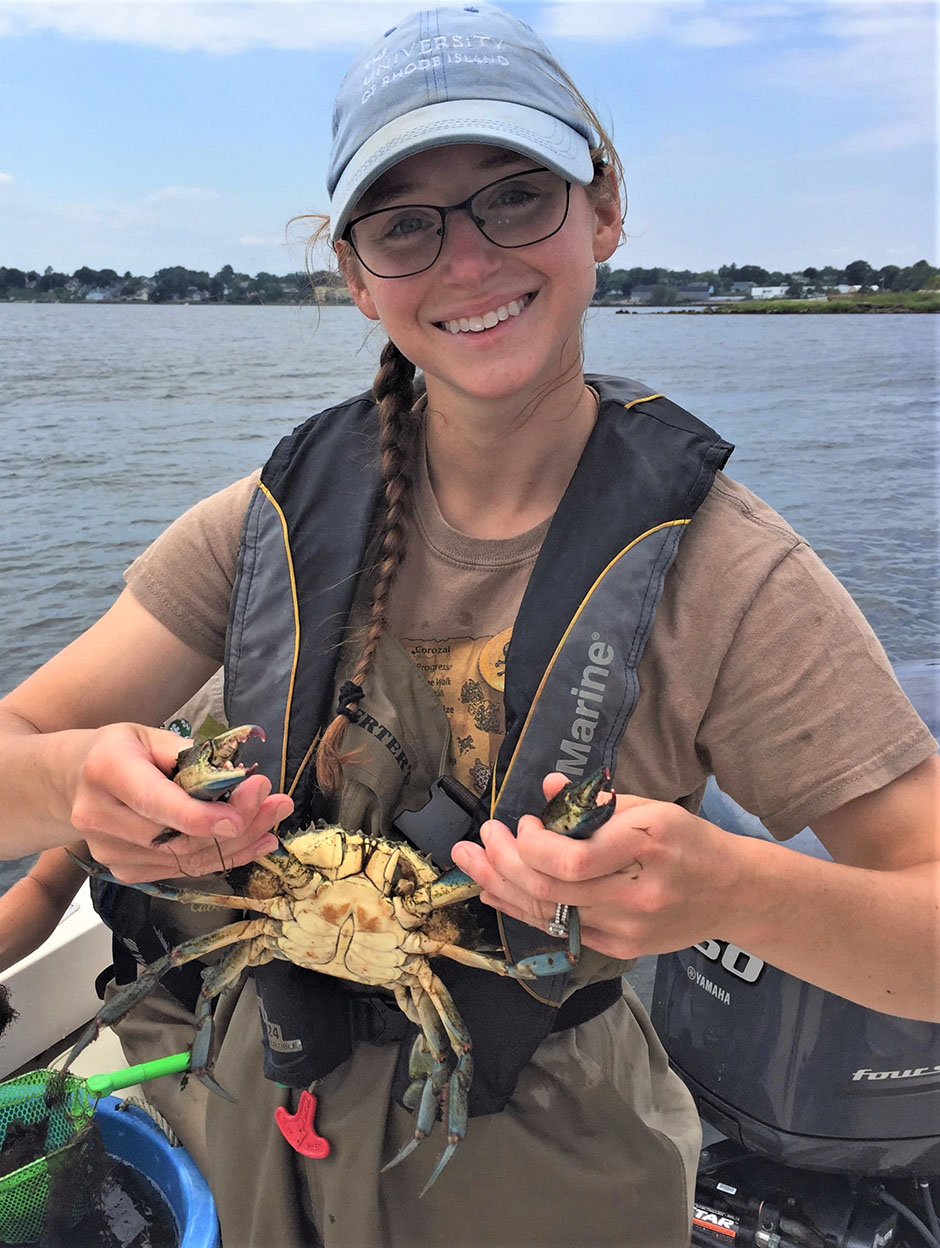 Heather Kinney with a blue crab, one of several mid-Atlantic species whose numbers appear to be increasing locally as Narragansett Bay gets warmer (Credit: Tim Mooney / TNC)

The study focuses primarily on sport fish because it’s a sport fish restoration-funded project, but it has also helped to identify general improvement within the ecosystem. The larger fish traps allow researchers “to see the adult stages of the fish when they come into the bay, how many there are, their health as well as the water quality when we catch them,” shares Kinney.

Beach seines and eel pots are also used along the shoreline, which turns up smaller species and juvenile sport fish. The shallow-water traps and nets allow for the true biodiversity of the Providence River to be seen. “We get a lot more diversity in the traps placed along the shoreline because it’s shallower water and safer for the small critters,” says Kinney. The traps also help indicate which habitats are best for species by comparing an artificial reef site with controlled sampling at a rocky and sandy-bottom shoreline.

While most research is conducted from the safety of a boat, sometimes snorkeling and diving are needed to obtain additional information. Kinney and her team measure salinity, dissolved oxygen (DO), temperature, conductivity and other parameters but these data points may still fall short of explaining catch data. For example, if water quality data reveals ideal conditions for fish but no fish are turning up in traps, divers may need to enter the water to see where the fish may be nesting instead. Diving is also particularly helpful during oyster surveys, as not everything can be seen from the surface or water quality data.

Kinney explains the phenomenon by saying, “If you have low DO levels and no fish, then that makes sense. If the water quality is good, but we’re not catching anything then that may tell us something else about species distributions.” For example, if an artificial reef has been installed in the area recently, fish are unlikely to turn up in fish traps because they use the reef for shelter and are less drawn to the traps. Even when there are no catches, Kinney explains that “No data is data. Having zeros is good information.” If dive monitoring reveals that reefs are being used, causing fish to avoid traps, then the zeros suggest that the artificial reef is working.

TNC invests a great deal of time and money into these enhancement and restoration projects and ensuring that the best and most sound methods are being used. When a project begins, program leaders look at all of the previously gathered data to determine what method would be best for that site specifically. Salt marshes, artificial reefs and other green infrastructure options may individually or collectively work for a specific location.

Complex structures called Reef Balls can be installed along shorelines lacking complex structures. Reef Balls also help with wave attenuation, breaking waves up before they have a chance to collide with the shoreline, preventing erosion. Building oyster reefs is another enhancement method that enhances both ecosystem services and fish habitats as it creates complex structures and access to food. Oysters are also filter feeders meaning that their presence in the ecosystem improves general water quality for the betterment of the habitat.

“Monitoring is super important because we spend lots of time and money on building these projects and we want to make sure that what we’re doing is actually having a beneficial impact on the system,” Kinney explains. “The only way to do that is to monitor it. I think sometimes, the funding goes towards creating a project and not enough to monitoring after the fact and so you have a lot of projects that get on the ground but we don’t really get a sense of how much they’re positively impacting the system because the funding doesn’t normally reach for 5 or 10 years down the line,” she continues. 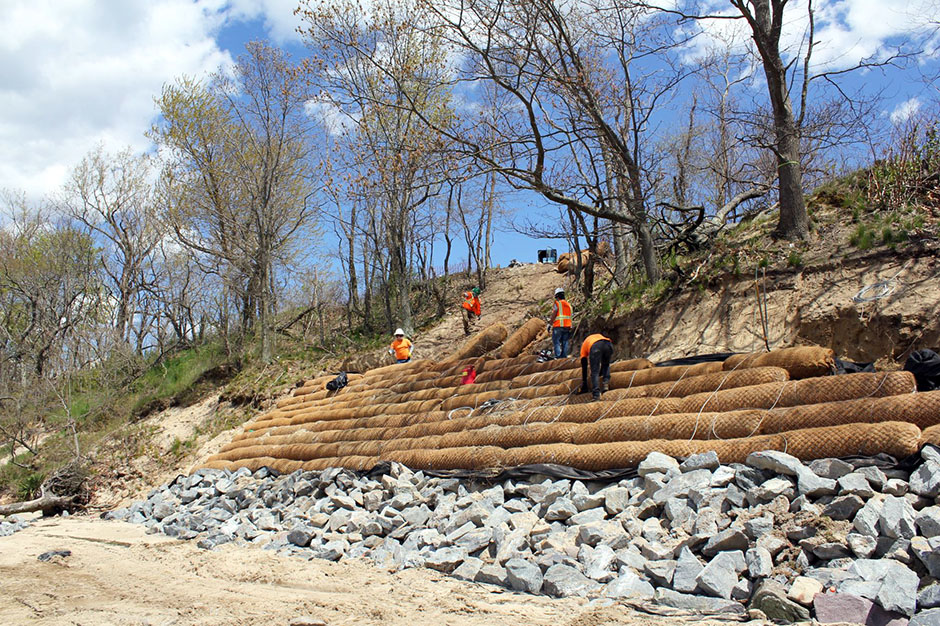 The data collected by groups like TNC inform state and local environmental initiatives within and outside Rhode Island. Locally, TNC works alongside the Rhode Island Department of Environmental Management, helping to “directly inform management decisions for the state of Rhode Island,” shares Kinney. She expands to say, “TNC is an inter-state organization–it isn’t just in Rhode Island. It’s in every single state so being able to compare that data across a larger geography and learn from each other and just contributing to that science is impactful.”

Not surprisingly, Rhode Island, like the rest of the U.S., suffers from various impacts of climate change, making it, and the other variables it introduces, a major concern for the region. For coastal states like Rhode Island, “We talk a lot about sea level rise and developing some infrastructure to deal with flooding in our areas,” explains Kinney. Wave attenuation, flooding, frequent large storms, eroding shorelines and preparing local towns and people for these events are all major concerns for TNC Rhode Island.

TNC works closely with the Rhode Island Municipal Resilience Program, facilitating conversations with local municipalities to determine the area’s greatest concerns that they want to improve. Once a plan is established, TNC helps organize grant applications to secure project funding. An example of one of these projects is Rose Larisa Park in East Providence on the Providence River. The bluff at Rose Larisa Park is eroding and falling down a cliff due to increased wave action resulting from rising waters. Additionally, coastal erosion and unhealthy vegetation that cannot hold everything together have caused the bluff to deteriorate further.

The city has a lot of coastal restoration options in situations like Rose Larisa Park. “One of them is to put in a structure like a Reef Ball which acts as a barrier to any wave action coming in. The waves, instead of hitting the shore are going to hit that hard structure first and then get slowed down before it hits the shore, slowing erosion,” Kinney shares. She continues, “Another great option are salt marshes which are great wave attenuators.” For that particular project, TNC worked with the RI Coastal Resources Management Council and an organization called Save the Bay to install “a small, experimental salt marsh in two different locations on the beach.”

Salt marshes and Reef Balls are good alternatives to a hardened shoreline. Hardened shorelines are commonly installed to repair or prevent erosion; however, they often end up being more destructive in the long run. For this specific project, salt marsh grasses were planted along the shoreline. “It’s actually doing pretty well. Initially we had some geese eat a lot of it, but now the salt marsh is doing pretty well. We also installed a coir log system that is a combination of biomaterial, coconut fiber and some smaller rock, as a combination of hard and soft structures,” says Kinney. Both installations are helping prevent the bluff from falling or eroding anymore and have helped to flatten the bluff out. 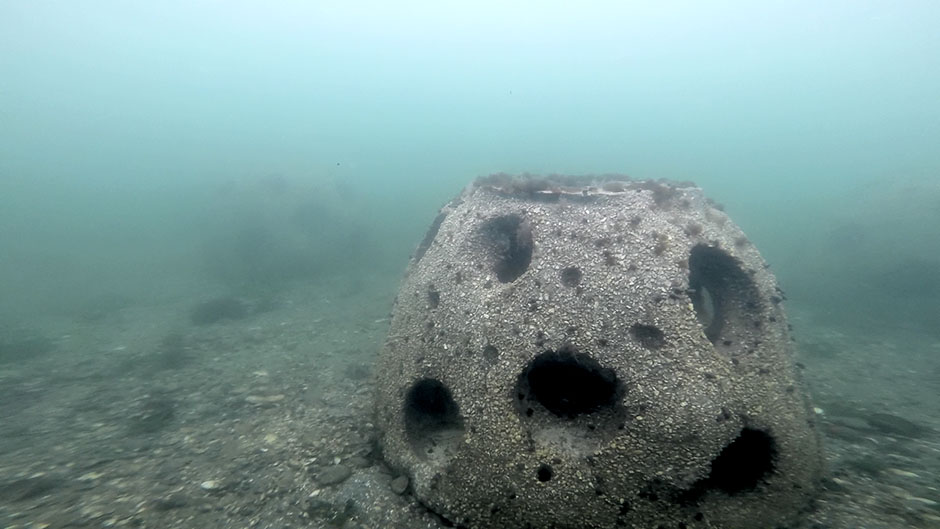 Due to climate change, aquatic ecosystems worldwide have been facing climbing water temperatures, and Rhode Island is no exception. As a result, Rhode Island has seen a great deal of species migration in the region. “For example, we’re seeing a lot more black sea bass, which are typically mid-Atlantic species. However, a lot more are being found in the Providence River estuary than in the past,” says Kinney. A similar occurrence has been noted in blue crab populations in the areas. The population change will undoubtedly impact the ecosystem and fishing industry, though monitoring will determine the extent of these changes.

The artificial reefs that TNC installs help provide habitats and food for species in the area, keeping populations steady and protecting habitats. Some of these reefs are close to recreational fishing areas, which helps raise awareness for the species in the area. Oyster habitats work similarly to artificial reefs but have the added benefit of contributing to ecosystem productivity. Much like artificial reefs can help break waves up, oyster reefs can do the same while providing food to fish and preventing shore erosion.

Living along the coast and being near such rich pockets of biodiversity is a gift that should be appreciated and treasured. Part of that appreciation is through the responsible use of natural resources. “It’s not about keeping people out, we want people to enjoy and love nature,” Kinney says. Kinney elaborates, “I think a lot of times with conservation, it feels like what we were trying to do is keep people away from things, but I want people to know that nature is for us–this is for people too and we’re a part of it.”

Sharing that love and stewardship with others is one of the best parts of Kinney’s work. “We have a lot of folks come up to us while we’re in the field and ask what we are doing and being able to share that with them and see people, not necessarily change their mind, but not know what’s two feet from them when they’re on the beach is really cool because trying to foster that love of the natural environment means that more people will want to protect it,” she says.