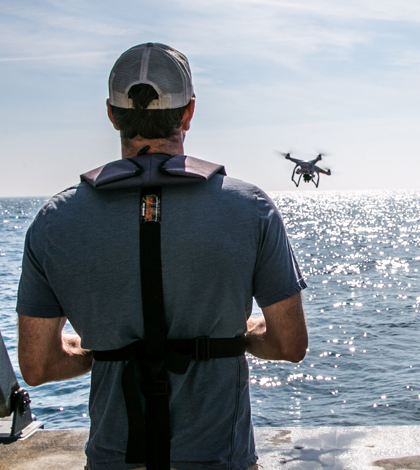 As booming populations in coastal cities heighten development pressure on nearshore environments, scientists are grappling with the problem of studying water quality in habitats that can be hostile to standard monitoring methods.

Where in-situ sensors and research vessels might struggle in these shallow and complex environments, scientists at a Washington-based Marine consulting firm say sensor-toting aerial drones are emerging as promising tools for the job.

Researchers at Gravity Consulting are pairing widely available drones with relatively inexpensive multispectral sensors sourced from the agricultural industry. They’re developing methods that bridge the gap between the detail of in-situ sensors and the scale of spectral imagery typically associated with satellite instruments. The work could have applications for anyone looking to detect important nearshore impacts on water clarity, primary production and harmful algal blooms.

The origin of the instruments and software behind the project also indicate the growing value to environmental scientists of tapping consumer electronics and other industries to find research-ready technology, according to Shawn Hinz, senior managing partner and principal research scientist at Gravity.

“Having tools that can work in this nearshore environment is really critical and there isn’t a lot of R&D actually being done on that,” Hinz said. “There is technology coming from the consumer electronics sector that can now be applied on the scientific side, and drones are one of the obvious ones.” Drones can capture details of complex nearshore environments like this coastal estuary in the U.K., which can be difficult for vessels to navigate and hard on sensors. (Credit: Ryan McEliece / Gravity Consulting)

Drones have recently gained a foothold in environmental monitoring, especially in applications that can use aerial photographs. Biologists, for example, can conduct population surveys by counting animals or nests captured in drone imagery. But water quality monitoring hasn’t been explored as much, Hinz said.

Monitoring water quality through multispectral aerial imagery — traditionally through satellite-mounted sensor systems like MODIS — is proving useful for parameters such as turbidity and chlorophyll. Its advantages over in-situ measurements include a much broader spatial scale and cleaner access to shallow nearshore environments that can be impossible for a research vessel to navigate or unwelcoming to sensors.

“We have a lot of experience with that,” Hinz said. “We’ve broken a lot of instruments trying to monitor too close to shore.”

But there’s a big obstacle that can come between a satellite sensor and the ecosystem scientists want to study: clouds. Hinz said satellite images of a U.K. estuary where his firm wanted to estimate primary productivity produced a grand total of three cloud-free days over a six-month span. Cloud cover is also common in the Pacific Northwest where Gravity is based, making satellites less useful for studying their home water of Puget Sound.

And while satellites can easily capture a snapshot of large study sites that in-situ water quality sensors can’t, their low resolution can leave out a critical level of detail. Drone-mounted sensors hit a happy medium.

“The power of using the drone is that we can actually get quite precise data from individual points but over a large area — especially if you’re still using in-situ measurements,” said Hinz. “So it’s really getting the best of both worlds.” Gravity crews launched drone flights over nearshore environments in the Pacific Northwest, the U.K. and France while simultaneously collecting turbidity and chlorophyll-a data with a YSI EXO1. The algorithms they’ve developed to interpret the data from the drones are producing good correlations to the in-situ sonde data, Hinz said.

Though the drone-mounted sensors typically produce better data than satellites for these applications, this approach does have limitations. Since each site is different, in-situ measurements will still be important. While clouds don’t present the same problem, the drones fly best in dry conditions with winds under 15 mph. This method also best suits study sites smaller than 100 acres. That said, most of the marine environments where Gravity is called in to assess development impacts are in the 5- to 20-acre range. The more practical limit on site size is likely how many battery packs they have on hand, Hinz said.

While Gravity is still refining their methods and processing tools, Hinz said one of the benefits of working with consumer electronics is the strength of crowd-sourced software, like the programs used to stitch imagery together. Drawing from the crowd is one of the quirks that has Hinz particularly excited about exploring a burgeoning source of technology and information for scientists.

“This concept of cross-technology transfer from consumer electronics to science is kind of a new thing,” Hinz said. “A lot of people could be doing this and applying this it to their own lakes and rivers.”