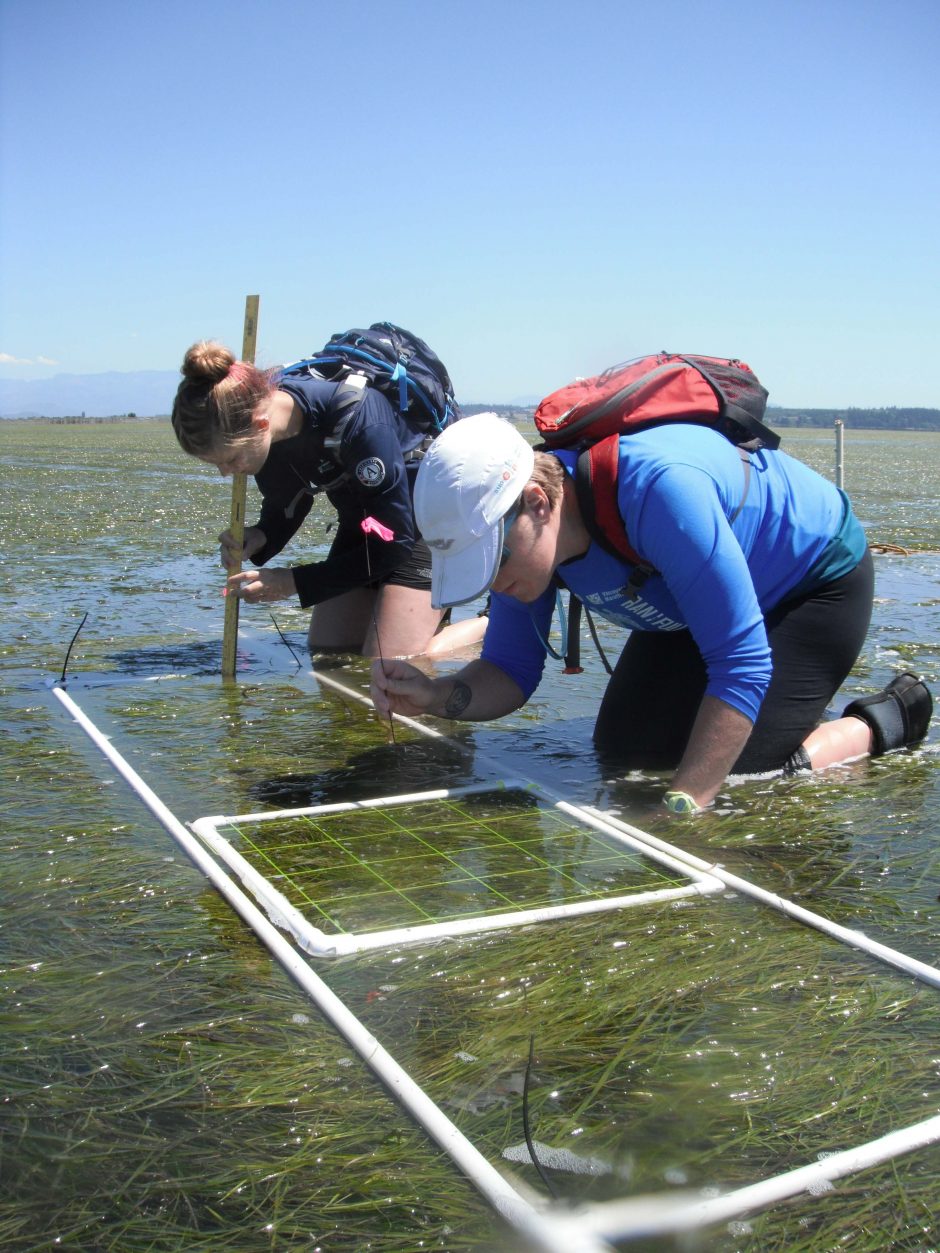 Dr. Jude Apple, Research Coordinator at Padilla Bay NERR, explains that the importance of the eelgrass to marine life, as well as its contributions to the Padilla Bay area, cannot be overestimated. “We have one of the largest contiguous eelgrass meadows in North America. It is the largest contiguous eelgrass meadow in the lower 48 states. Only Alaska has a larger contiguous one. Ours is about 9,000 acres. It’s hard to explain how beautiful it is, and how critical it is to wildlife here. It’s a fantastic nursery for so many species, including salmon, crabs and herring. It’s also habitat for marine birds like the great blue heron and black brant. It’s also an important hunting ground for raptors such as bald eagles, which are abundant here”

Apple became Padilla Bay’s Research Coordinator three years ago. Previously, he held a faculty position at Western Washington University, but even then, was collaborating with researchers at Padilla Bay NERR. Apple also has been running workshops for teachers through support he receives from NOAA’s Environmental Literacy Grants program. The workshops feature environmental topics such as climate change and utilize real-time data gathered through NERR’s System Wide Monitoring Program (SWMP). While there are many environmental topics of research in the Padilla Bay area, such as planktonic community health and sea star health, the big interest for Padilla Bay is monitoring the vibrancy of the eelgrass meadow. “We’re the only Reserve that has its Sentinel Site and Surface Elevation Tables (SETs) established exclusively in eelgrass meadows. Most of the other NERRS have their SETS in salt marshes,” says Apple. 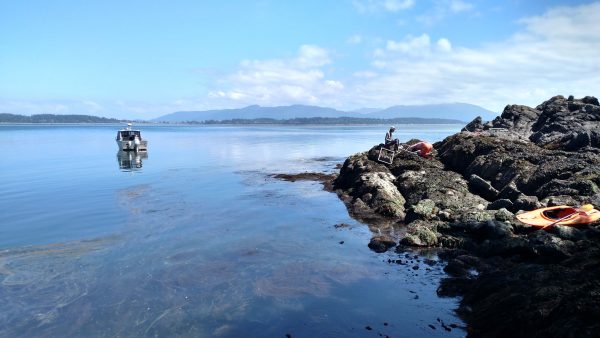 MARINe monitoring site on Saddlebag Island with Melissa Miner and Hazel Levine counting seastars. The RV Edna B. is to the left. (Credit: Jude Apple)

While the 9,000-acre eelgrass meadow is unique to Padilla Bay NERR, there are other features of the NERR program there which are shared with the other 28 NERRS all over the country.

“We do the same System Wide Monitoring Program (SWMP) data gathering protocols as the other NERRS,” Apple mentions. “That includes monitoring weather using a designated weather station, and monitoring water at various locations in the Reserve, gathering data such as water depth, temperature, salinity, dissolved oxygen, turbidity and pH.” Two types of data sondes are currently being used to gather this data: YSI 6600 and YSI EXO-2 sondes. “We have 12 sondes in circulation, and we’re going to buy a couple more. We’ve almost, but not quite, replaced all our YSI 6600 sondes with EXO-2 sondes. We’ve found the EXO-2 sondes to be a big improvement over the older 6600 ones. The EXO-2 ones have wipers to reduce biofouling and we’ve found they last longer in the field,” adds Apple. Some of the data sondes at Padilla Bay NERR are located at four core environmental monitoring stations, with two sondes in rotation per station. Two years ago, an additional station was added. This station was special, as it added a deep incoming ocean water habitat to the monitoring mix. “The Padilla Bay dive team deploys our sonde for that station,” says Apple. “That location is 75 feet deep at high tide and 60-65 feet deep at low tide. A pretty big flux.” 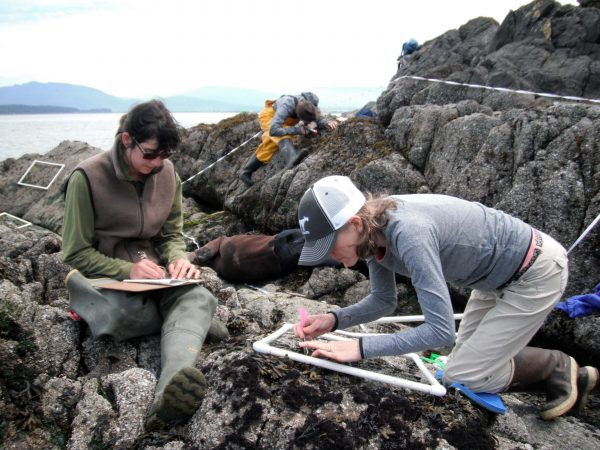 In addition to the beautiful, otherworldly eelgrass meadows, a research focus at Padilla Bay that other NERRS do not typically have is the purple sea star, including a pointed interest in sea star wasting disease. In 2014, Padilla Bay researcher Heath Bohlmann started seeing high numbers of diseased sea stars. “By 2015, we were starting to see a definite increase in sea star wasting disease deaths. We started monitoring the sea stars in Padilla Bay in 2009, so we had the data showing clear declines. It ended up that we lost almost 90 percent of our purple sea star population. It was an absolutely devastating outbreak across the entire Salish Sea.  A viral pathogen is suspected to be associated with the deaths,” Apple explains. “We are still trying to understand why the outbreak was so bad. Sea star wasting disease has been around for years, but for some reason it became catastrophic.” Recovery of the purple sea star is still occurring.

Padilla Bay’s sea star monitoring does not occur in isolation. The NERR is part of the multi-agency rocky intertidal network (MARINe), a West Coast network monitoring the rocky intertidal community. In addition, it has partnerships with NOAA, UC Berkeley and other organizations. Padilla Bay NERR is also part of the Washington State Department of Ecology. “We work hard here at Padilla Bay,” says Apple. “My colleagues here are great.” 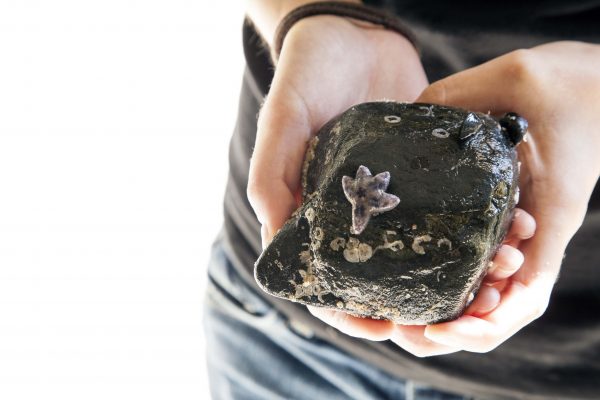 While researchers, students and other visitors can observe Padilla Bay’s eelgrass meadows directly, other habitats at Padilla Bay can be explored at the Breazeale Interpretive Center. There are free classes on plants and animals in the Padilla Bay Area.

For researchers such as Apple, however, the 9,000-acre eelgrass meadows will always provide the biggest, most unique environmental monitoring draw. “The eelgrass meadows are special to me,” says Apple. “They can take on an unearthly beauty. I remember being out here in the dark at about 3 AM on the water, out gathering data in the eelgrass, and there was a wave of bioluminescence around the boat. It was like a scene out of Avatar. There were planktonic polychaetes, hundreds of them, surrounding the boat and making the water glow in the dark. There’s just nothing else like it. You never forget seeing something like that.”

Padilla Bay NERR continues to offer unique experiences for researchers, students and other visitors to enjoy. The beautiful, biologically critical and seemingly vast eelgrass meadows are no small part of what makes Padilla Bay special.

“Our eelgrass is like the rainforest of the intertidal environment,” Apple reflects. “It’s that important, and that precious of a habitat.” 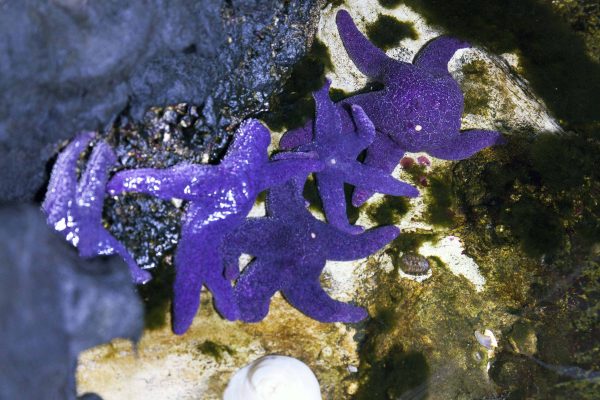