Erdman Cameras Key to Monitoring at Everglades, Elwha River and Other Sites 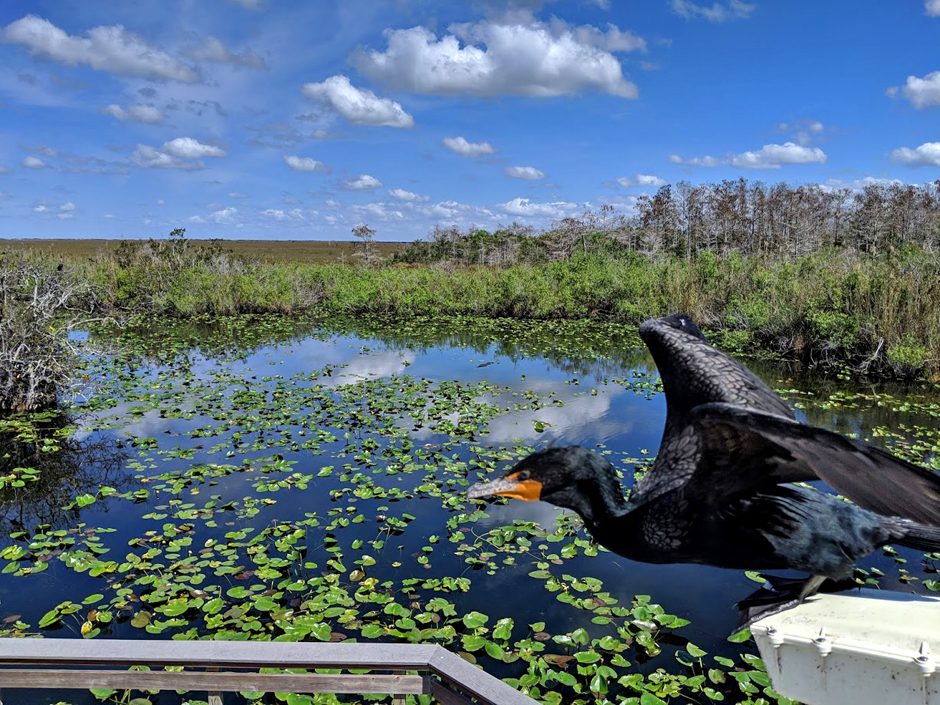 Many people point to a course in college or a special professor who set them on the path to their life’s ambition. For Nick Malinguaggio, Executive and Treasury Secretary for Erdman Video Systems, events leading to his life’s calling happened much earlier. “It all started as a high school job program. I was getting really good grades but I was kind of bored, to be honest, and the program let me leave school early,” Malinguaggio recalls, laughing. “I was an intern at Erdman at first, and over time I learned every aspect of the company. At that point, Erdman was already selling cameras all over the world. I spent a lot of time learning everything about our camera systems, including mechanics, assembly, how to fix and maintain them, and the business side of it.  I worked my way up in the company over time, up to Executive in 2008.”

Erdman Video Systems started in 1991, and Malinguaggio has been there since 1998. He has dealt with hundreds of cameras over the years. One of the many uses for the cameras is as a tool in environmental monitoring.

One of the environmental monitoring camera projects Malinguaggio has worked on is the Anhinga Trail camera project in the Florida Everglades. “We got a cold call from the National Parks Service. They wanted a way to capture an important Anhinga bird roosting area near a popular park destination. They wanted to capture and document the roosting behavior over time,” says Malinguaggio. “The setup has been there now since 2008. It’s solar-powered, and shuts itself off at night to conserve energy.” The setup takes pictures during the day either every 30 minutes or every hour, depending on the time of year. The camera can also take images at night. “We put the camera on a boardwalk on top of a small covered area. The small roof provided the perfect vantage point to capture the Anhinga roost.  We mounted the camera on the corner nearest the Anhinga roost,” Malinguaggio recalls. The camera originally used a pan and tilt motor allowing the device to sweep the area to capture other views, but the park later discontinued use of the motor to focus on the Anhinga. The camera used for the project was a Mako TL time-lapse camera with a cellular connection to servers via Verizon. It has an 18 MP camera, solar and cellular capability and can be mounted anywhere. “It’s completely weatherproof,” notes Malinguaggio. “It can be fastened to a pole or the side of a building since there’s no need to worry about cords. Our product can use 4G and solar for a true off-grid camera solution.” 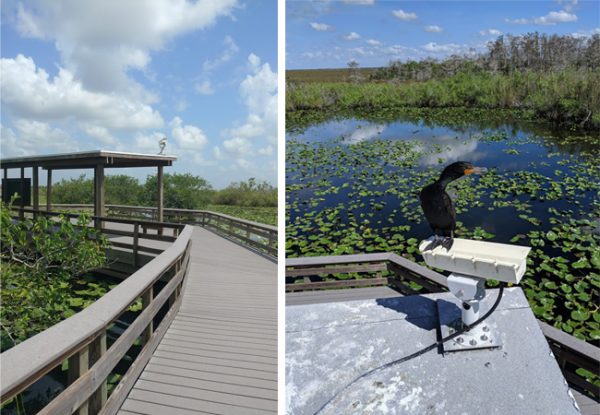 Another environmental monitoring project Malinguaggio has worked on is the Elwha River restoration project in Washington State, which he also worked on for the National Park Service. “There are a number of defunct dams they are taking down because they’re no longer needed, and they’re restoring the river flow as it once was, as much as is possible,” says Malinguaggio. “Glines Canyon Dam and the Elwha Dam were both blocking the natural flow of the Elwha River, and the NPS wanted to restore the area’s ecosystem. They wanted to use the cameras to study the ecosystem and its recovery after dam removal.” One of the aspects of the recovering ecosystem was to look at the flow of the river after dam removal and how it interacted with the sediment built up by the dams. The cameras captured JPEGs of the ecosystem recovery over time. “We worked with USGS to process the images for research studies,” recalls Malinguaggio. “The cameras let us see the ecosystem recovery in terms of the plants, how they recovered over time. Sides of cliffs were reseeded with trees, and we also kept an eye on changes in the sediment, looking to see if erosion continued to occur.”

The return of the Elwha to its natural state was a huge benefit for salmon populations in the area. “Before the deconstruction, there were salmon who couldn’t swim back up the river to spawn,” said Malinguaggio. “The Elwha is one of the only rivers to host all five native Pacific species of salmon, so estuary recovery meant they all had a chance of breeding there again. The project meant a great deal for the recovery of the salmon population.”

Two of the project cameras are still being run by government agencies. The cameras for the Elwha River project were also Mako TL cameras. While the Everglades project provided camera mounts, Malinguaggio and his team were not so lucky with the Elwha project. “We had to find our own place to mount the cameras,” he recalls. “But that wasn’t as hard as it sounds, because it was Washington State and the area was full of tall, sturdy trees. Huge trees. Some were big enough to fit a party of people in each trunk. We just had to decide which trees gave us the best view of the dam removal project areas.” Getting the cameras mounted on the enormous trees, however, took a sizable effort. “We hiked up there, carrying ladders with us,” says Malinguaggio. “We also didn’t want to damage the trees, so we used door carpets between the camera straps and the trees. The straps could be tightened with a worm gear. We did 3-foot sections with 7 straps, making 21 feet of strapping.” 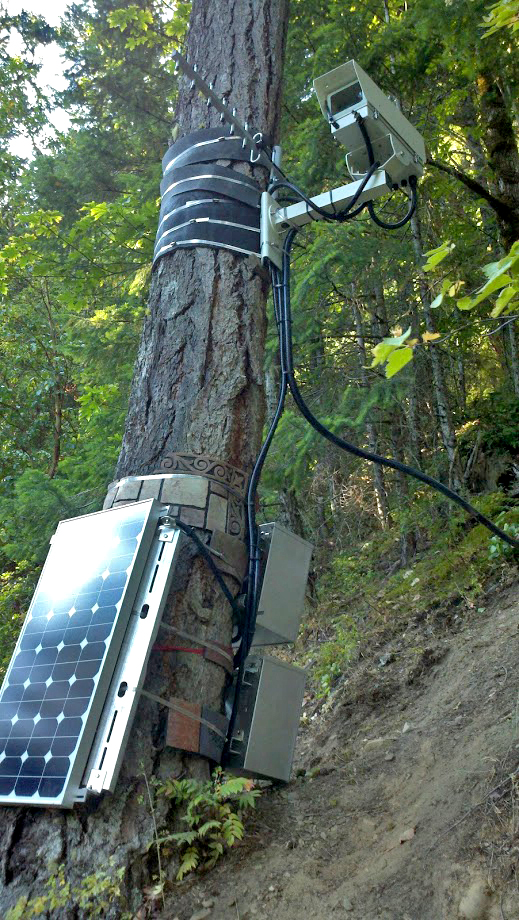 Of the two Elwha River project cameras that are still running, one is located on the side of the former dam, at the spillway. It was a 210-foot tall dam, so in order to mount that camera, they hitched a ride on the project crane that was already on the site. “It was one of the biggest cranes you can get. They used it to hoist the demolition equipment down to the barge on the lake surface,” says Malinguaggio. “The camera and solar panels were anchored to the side with stainless steel hardware and lightweight aluminum brackets from a man basket carried by the crane.” The other camera that is still running is on the back section of a property where the owner allowed them to install a camera right on their deck.

Besides the Everglades and Elwha River projects, Malinguaggio has also installed several beach cams for environmental monitoring in Florida, in the Palm Beach County and Martin County areas.  “Local management in the districts wanted to monitor sand movement and beach erosion,” Malinguaggio recalls. “They wanted to better make decisions on when to add sand to the beaches. It’s always an ongoing process here. Sand piles up on the jetties and in the inlets and needs to be dredged to maintain access to the Intracoastal waterways.” For these projects, Malinguaggio used Mako TL cameras with pan and tilt motors that had streaming capabilities. He also used Vision Recon 1080 PTZ webcams with streaming images that uploaded directly to the cloud. “Boaters can also use those to monitor weather conditions. The local environmental resource agencies are the ones who monitor the images produced by the camera in order to make decisions on the coastal re-nourishment,” Malinguaggio mentions. Some of the cameras were mounted directly on pump stations (used to pump and redistribute sand).

Erdman Video Systems cameras typically require very little maintenance and can run for years without needing care. “Many of the cameras can run for about five years without needing any care from us, but for the ones strapped onto trees, we have to adjust the straps every couple years or so. Some of the camera lenses need to be cleaned if they get really dirty, but that doesn’t happen terribly often,” says Malinguaggio. 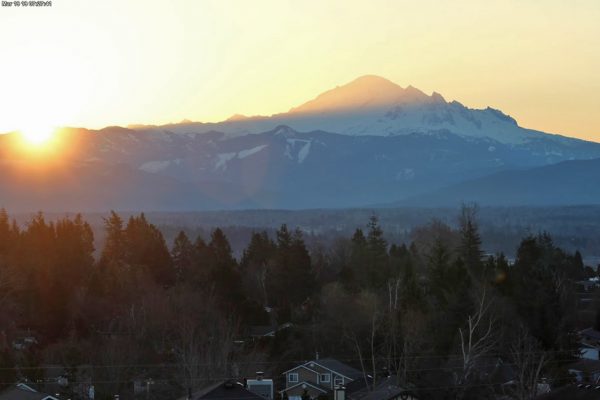 Malinguaggio has enjoyed his life as a camera expert and Executive at Erdman. “Every project is interesting in its own right,” he says. “Clients often keep archives of images and make videos out of those, and that’s always gratifying to see.”

Malinguaggio notes, “There is always something new and exciting going on at Erdman. It’s neat to see the applications people use our cameras for, all over the country, in all sorts of interesting places. Outside of the country, too. We’ve sold cameras to many similar projects globally, in Australia, Italy, Saudi Arabia, Qatar, even Columbia and the Bahamas.”