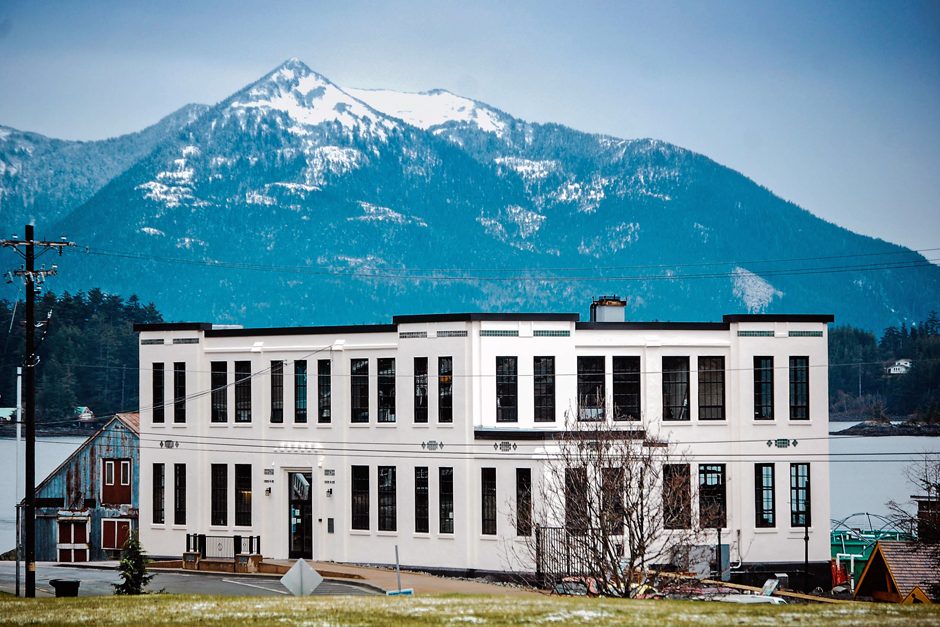 While Ron Heintz has only been Research Director at Sitka Sound Science Center for a few weeks, he is no stranger to marine science, having spent 34 years working for NOAA. “I was looking for a new challenge,” says Heintz. “My goal is to develop Sitka’s research program.”

The Sitka Sound Science Center is located on the former site of the Sheldon Jackson College campus, once a Presbyterian Missionary School for Alaskan Natives in the 1880s. Over time, the school changed hands and is currently owned by several non-profits. Originally a place where boys could learn boat-building, shoe repair and printing, and girls could learn housekeeping and cooking, by the 1970s students were arriving to learn aquaculture and fish sciences. They also built the first salmon hatchery in Alaska with a state-issued permit. The College closed its doors in 2007 and reopened in 2010 as the Sitka Sound Science Center. The enthusiasm for research continued, and the Center took over the College’s hatchery.

Sitka Sound Science Center now functions as a biological field station and is a member of the Organization of Biological Field Stations (OBFS). “As a field station, we have two main objectives: 1) to be a center for education and educational outreach, and 2) to perform marine research,” says Heintz. Research at Sitka Sound is done in coordination with various other research entities, including the U. of California at Santa Cruz. “One of the big interests we share with Santa Cruz is monitoring the effects of ocean acidification on nearshore species. One of the ways we can help protect nearshore species from acidification is by maintaining healthy kelp beds. Vulnerable marine creatures, such as herring embryos, may be protected by kelp. This is an active line of research being conducted in Sitka. Along with the U. of California at Irvine, we help to monitor marine biodiversity,” Heintz mentions. 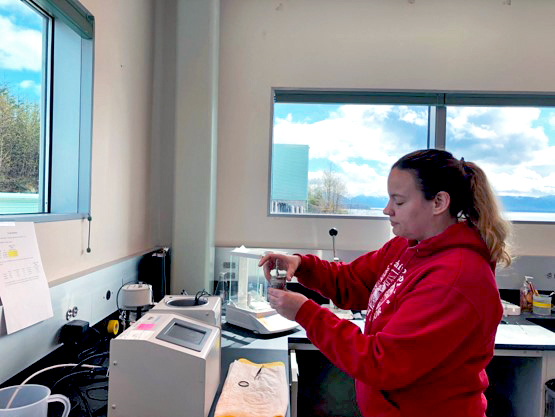 There is also an interest in landslide research. “There was a big landslide a couple years ago where people were killed. We have been partnering with the Rand Corporation to develop an early warning system,” he adds.

Sitka Sound Science Center has also been working with NOAA and the Alaska Fishery Science Center on indices of ecosystem conditions for juvenile fish, especially on monitoring their nutritional condition. Calorimetry is used to monitor juvenile fish. Surveys conducted by NOAA, in the Bering Sea and the Gulf of Alaska, occur in alternating years. Surveys last 6 weeks and sample a gridwork of 130 stations located 30 nautical miles apart. These surveys are part of NOAA’s ecosystem monitoring. Heintz says, “We get a profile of the water column by collecting water samples at various depths.” Chlorophyll content is determined by fluorometric means, and a SeaBird CTD is used to get water temperature, conductivity and water depth data. “This data is very precise, good enough for oceanographers to use,” says Heintz.

They also collect zooplankton data. “We have two sets of nets called bongos, one set of two nets has a small mesh size and captures small zooplankton, and the other set has a larger mesh size and captures larger, faster swimming zooplankton. By having these mesh sizes and netting systems, we will be able to collect microplankton all the way up to krill,” says Heintz. Zooplankton are preserved for later analysis. One of the nets is quantitative, the other can be used for specific sampling requests. Copepods are sorted to the species level, frozen, and brought back to the lab where a spectrofluorometric method is used to measure their lipid content. In this way, the amount of fat/energy available to the fish that eat the copepods can be measured. “The more fat the better,” mentions Heintz. 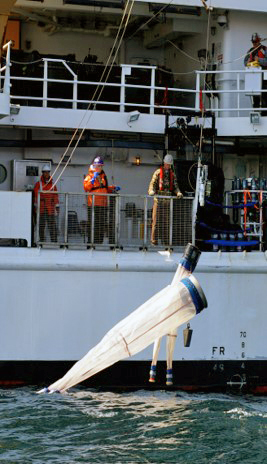 In this photo, bongo nets are retrieved from the Bering Sea. The large nets with 505μm mesh are visible in the foreground. The smaller nets with 170μm mesh can be seen above. (Photo by Mike Levine)

After the zooplankton is caught, trawl nets are put out to sample fish. The trawler catches fish as far down as 30 meters deep (the top 30 meters of the water column) and the net is 180 meters wide…a huge net. “There are big wings that go out the sides, making for an enormous catch capacity,” Heintz says. The net begins with a one-foot mesh and goes all the way down to a quarter inch mesh.

After the trawl is finished, the catch is sorted by species. Samples are retained for lab analysis. Stomach contents of fish are removed and analyzed for prey. Data on the fish diets, weights and lengths are taken. Calorimetry is also used to measure the calories/energy content of the fish per unit body weight. “The energy content shows us how likely the fish as a group will be able to survive,” Heintz explains.

NOAA has gathered 16-17 years’ worth of data on the aquatic species of the Bering Sea. “We’ve learned that if there are cool conditions and a late ice retreat in May, some fish species have good fat stores and survive well. On the other hand, if the conditions are warmer and there is an early ice retreat, those same species have less body fat and don’t survive as well,” Heintz explains. “So it is very concerning that the Bering Sea has had no ice at all for the past few years. It’s rapidly warming. That’s bad news for the fishermen.” The ice helps protect species from storms off the northwest coast of Alaska, north of the Bering Strait. No ice means they are considerably more vulnerable to storms in addition to prey changes and other negative effects due to warming.  Sitka Sound is now cooperating with NOAA to help in the analysis of the samples and understand how changing conditions affect other species in the Bering Sea and the Gulf of Alaska. 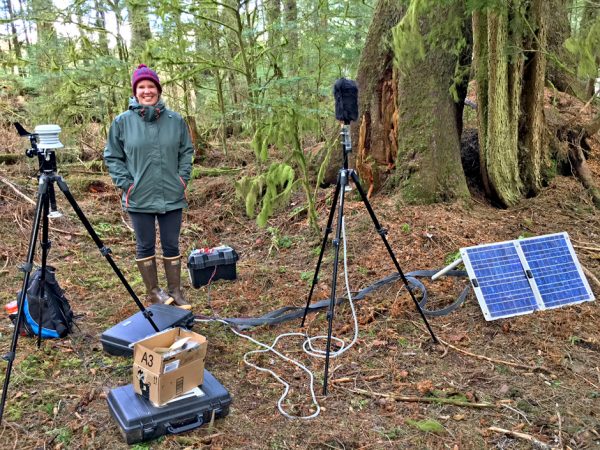 Callie Simmons of the Sitka Sound Science Center stands next to gear used to monitor conditions in the Sitka National Historic Park under a cooperative agreement with the National Park Service. On the left is a meteorological station that collects air temperature, wind speed and direction. On the right is a microphone for monitoring the park’s soundscape. (Photo by Tandi Stephens)

Heintz recalls a terrible warming event that happened in January 2014 in the Gulf of Alaska: the arrival of The Blob. “It was a huge mass of super warm water that extended north and west from the California coast up to the Aleutian Islands. It was as much as two standard deviations warmer than normal,” he remembers. “It caused the high mortality of whales and collapse of the area cod fishery. It also caused a massive seabird die-off by 2015 due to the numbers of cod, herring and other fish dwindling. The event ended in 2016, but by then it had changed the whole ecosystem. By 2017, 80 percent of the adult cod were gone.” NOAA also declared an Unusual Mortality Event (UME) for area whales in 2016. The whale deaths were a consequence of zooplankton and fish deaths due to The Blob. “A UME is declared based on standard surveys of whales. It was clear that the relative whale abundance had changed since 2005,” says Heintz. Impacts were felt by humpback, fin, minke and gray whale populations. These populations will need to be monitored for years to come as the climate changes and warming occurs.

Even though his position is still quite new, Heintz has already formed a positive view of Sitka Sound Science Center. “There are great people here, and I am excited by the new challenges and the possibilities,” he says. “As we develop the research program, I would especially like to emphasize herring, as we have the only operating herring fishery in Alaska here.”