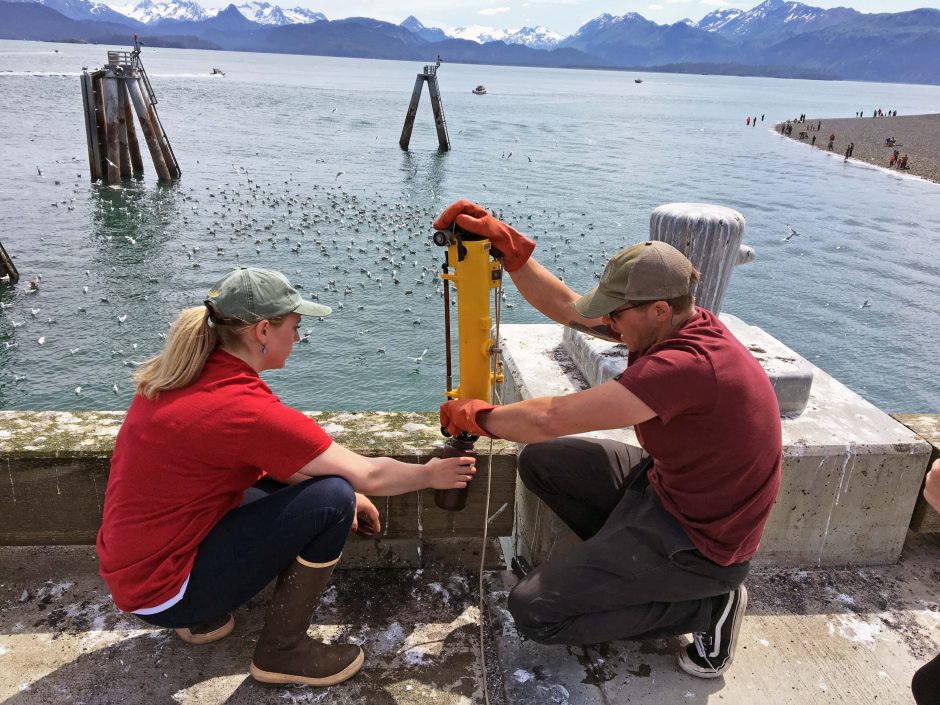 Covering 372,000 acres of freshwater streams, glacial meltwaters, tidally driven ocean waters and pristine woods, Kachemak Bay National Estuarine Research Reserve (KBNERR) in Homer, Alaska is one of the most picturesque of the 29 NERRS located all over the nation. It is also the only sub-arctic NERR. While it is one of the most beautiful places in the country, it is also one of the most sensitive. Sub-arctic ecosystems such as Kachemak Bay have been known to show climate change effects more quickly and/or more severely than in some other parts of the globe. Some species living in Kachemak Bay are so sensitive to the environment that even seemingly small changes in climate can have important effects on their populations. Case in point: salmon.

“We have all five of the Pacific salmon types here,” says Steve Baird, Acting Research Coordinator for KBNERR. “We also have Steelhead and Dolly Varden Trout. Our species, especially the King Salmon, have been significantly impacted by many factors in recent years, one of which could be the rise in temperature due to climate change.”

Baird has been monitoring fauna and flora at KBNERR since 2001. He has also been the GIS technician, Research Biologist and Stewardship Coordinator. Due to the many hats he has worn and the wealth of institutional knowledge at KBNERR he has been able to draw from, Baird has developed a perspective of KBNERR’s wildlife that is both wide and deep.

“In the past few years we’ve noticed the temperatures getting higher, and that has led to less snowpack and that, in turn, affects salmon streams,” says Baird. “But not all salmon species respond to temperature rise in the same way. King Salmon have been negatively impacted, but Pink Salmon have done better with the higher temperatures. Higher temperature generally means the fish must maintain a higher metabolism, and that means they need more food. The salmon that eat plankton in the ocean as juveniles seem to be doing better, the ones that eat fish have been doing worse with the temperature rise.” Juvenile salmon spend three years maturing in streams, sometimes very small streams, before traveling to the sea and later returning to freshwater to make their well-known journeys upriver to spawn. Estuaries like Kachemak Bay provide critical salmon habitat. “It’s amazed us how important even small streams are to the salmon. Often we have come across tiny headwater streams that are only a foot wide, and they have been teeming with juveniles,” Baird recalls. 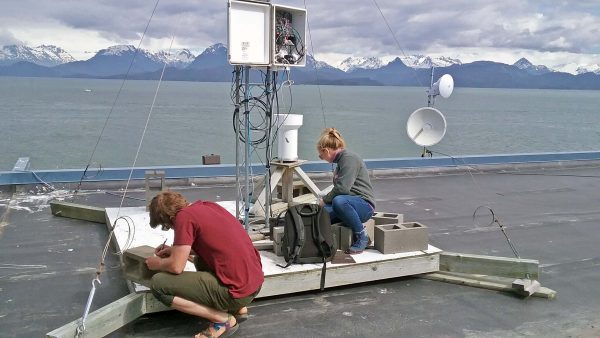 While some valuable KBNERR salmon species have been doing better in recent years, others worse, other valued species have dwindled as the climate has changed.  “We used to have Dungeness Crab fisheries up until the 1980s and King Crab fisheries until the 1970s. Those are gone now,” says Baird. A crab species that has been doing better in warmer waters is the invasive European Green Crab. “We’ve been monitoring for that one, waiting for it to enter KBNERR. We haven’t seen those yet,” Baird mentions, “But they could very well be on their way. They’re warm water crabs. The coldwater crabs we have are the ones that are doing worse.”

In addition to looking out for giant green invaders, Baird and other researchers look out for other harmful species: phytoplankton that cause Harmful Algal Blooms (HAB). There have been more HAB in recent years due to the rise in temperature, so it is an area of increasing concern at KBNERR. “Three big ones we look for are Alexandrium, Pseudo-nitzschia and Chaetoceros. Alexandrium can produce a toxin that causes Paralytic Shellfish Poisoning (PSP), which doesn’t affect the shellfish but can cause sickness or paralysis in humans. Pseudo-nitzschia may or may not produce a neurotoxin, and we haven’t yet figured out how to predict whether it will make the toxin or not. The Chaetoceros is not harmful to people, but it can decimate fish. It can clog baby salmon’s gills,” Baird says. Phytoplankton are continuously sampled for in the bay at KBNERR during the ice-free season using three-minute tows of eight or nine-inch cone-shaped nets. Samples are examined under a microscope to identify phytoplankton. Samples are either used fresh or preserved with iodine. Caged shellfish and mussels are also examined for toxins produced by phytoplankton.

Like the other NERRS, KBNERR performs SWMP monitoring of selected waterways. “We just switched over to all YSI EXO2 data sondes,” says Baird. “Before that, we were using the YSI 6600 sondes,” Baird notes. The sondes are used to gather data on dissolved oxygen, temperature, conductivity, pH, and turbidity.  SWMP also requires testing for nutrients like nitrogen, phosphorus and ammonium. 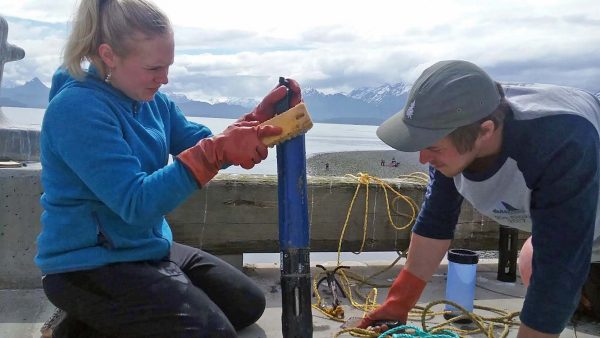 Unique monitoring not performed by other NERRS includes the long-term tracking of the circulation of Alaskan ocean currents. “It’s a very important process because ocean current circulation is what brings larvae of many important species into the Bay,” Baird explains. “We’ve been tracking these for ten years. We use drifters that send their locations to a satellite once an hour. It’s sometimes surprising where they end up. We had one drifter that went from Kachemak Bay to the Russian coast!”

In addition to Baird, they are nine other staff at KBNERR. There is also a significant amount of community monitoring, typically about 20 to 30 volunteers. Ranging from elementary school children to retirees, citizen scientist volunteers help monitor for Green Crabs, monitor water temperatures and gather plankton data. “We use HOBO Tidbit data loggers for gathering water temperature data,” Baird adds.

Despite a warming climate and occasional environmental challenges such as a terrible spruce bark beetle outbreak and a large seabird die-off that occurred when water temperatures became unusually high, Baird remains optimistic about the future of Kachemak Bay NERR.

“The mountains are spectacularly beautiful here,” he says. “I love the wildlife and the open space. People are really connected to the land here, and they are dedicated to preserving it. They are still out there in the wild harvesting moose, salmon, and halibut like they have for hundreds of years. I’ve been privileged to work with the people here and to have such a dedicated community surrounding me.”

KBNERR is partnered with the Alaska Center for Conservation Science at the University of Alaska Anchorage.