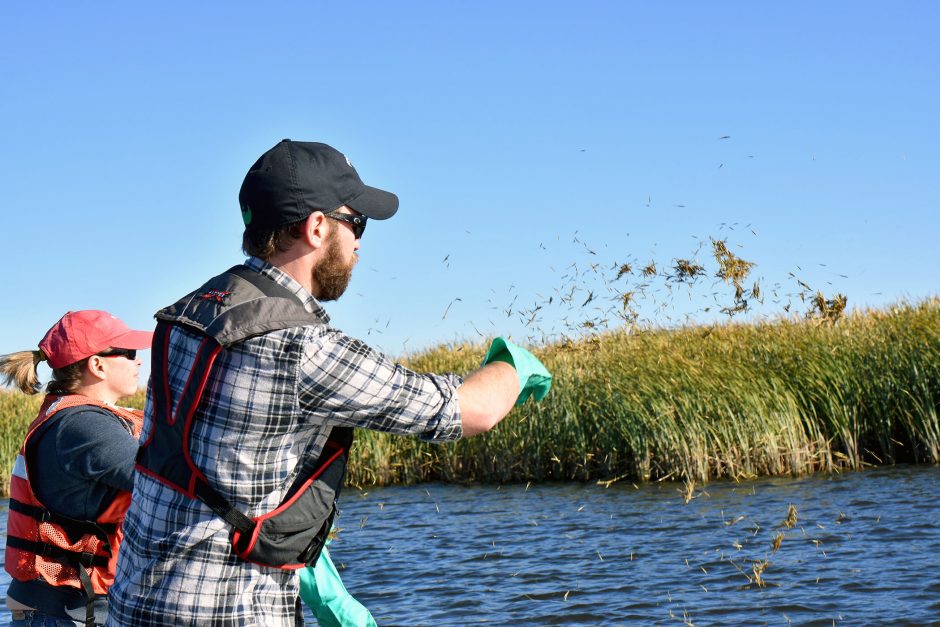 Parts of Wisconsin, Michigan and Ohio that encircle the world’s largest sources of fresh water, the Great Lakes, possess some of the most productive farmland in the world. They also contain critical wildlife habitat. “The Great Lakes region is a large priority for us,” says Chris Sebastian, Public Affairs Coordinator for Ducks Unlimited, covering the Great Lakes and North Atlantic regions of the U.S. “The Great Lakes area supports over 30 million people, so maintaining clean water and food free of pollutants is critical for wildlife in the region,” says Sebastian. “Wildlife needs the same things people do: pure water and uncontaminated food.  So, ultimately, when we support wildlife, we support people, too.”

Wetlands conservation is one of the most important ways Ducks Unlimited works towards maintaining clean water and food sources for people and wildlife in the Great Lakes Region. Wetlands, sometimes referred to as “nature’s kidneys,” are critical for filtering out contaminants and excess nutrients in the water. “There is a lot of agricultural activity here, and that tends to result in high levels of nitrogen and phosphorus from fertilizer runoff, which in turn can cause algal blooms,” says Sebastian. Algal blooms can render water undrinkable and kill fish and other wildlife. Add wetlands to the equation, and the excess nutrients from farm runoff can be mitigated, making water drinkable and food sources clean once more. 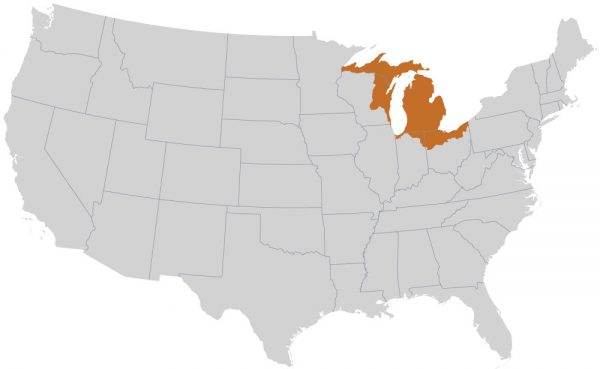 The region has about 10,000 miles of coastline. Coastal wetlands and some inland wetlands as well are very important for ducks as they need food and rest during their migratory travels. “Imagine trying to fly across huge lakes like Superior, Huron or Erie. Ducks wouldn’t be able to accomplish that without the rest stops that wetlands provide all along their routes,” Sebastian explains.

Ducks Unlimited uses a variety of approaches to achieve conservation of precious wetlands in the Great Lakes area.

“We have corporate and conservation partners who work with us to purchase wetlands,” Sebastian says. “Once we buy them they won’t be developed. We then transfer them to another organization, such as the Departments of Natural Resources in respective states. There’s a lot of science and conservation planning that goes into each purchase. We want to make the best use of our dollars.”

Sometimes Ducks Unlimited purchases land that is pristine. Sometimes the land isn’t in great shape but can be restored. One of the frequent types of purchases made by Ducks Unlimited is buying farmland that is no longer in use and converting it to wetlands. “A lot of farmland in the Great Lakes region was once wetlands,” says Sebastian. “So by converting the farmland back to wetlands, we’re really just returning it to a more natural state.”

Ducks Unlimited typically will not buy land that already has buildings and/or roads on it, as the cost of restoring such land to a natural state is significantly higher.

In addition to furthering conservation efforts by purchasing wetlands and retired farmland, Ducks Unlimited also has a full-service biological engineering team which aids in wetlands management. “You might think that converting retired farmland back to wetlands might be as simple as digging out the drain tiles,” says Sebastian. “But there’s more to it than that because you don’t want to cause flooding in all the neighboring farm fields that are still active. So one of the things our team does during restoration is create dikes to keep surrounding areas from flooding, even while we’re simultaneously restoring wetlands on our own parcel.” 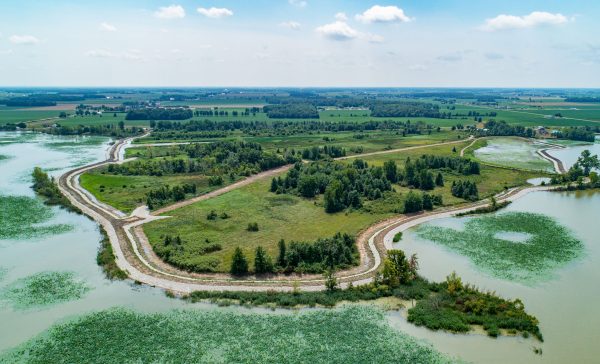 Ducks Unlimited and several conservation partners have reached a milestone in the revitalization of coastal wetland habitat at Toussaint Wildlife Area in northwest Ohio’s Ottawa County. Phase I of the multi-stage project has concluded and replaced more than a mile of levees along the Toussaint River. Over the past several months workers also installed a new water-control and seasonal fish passage structure. The $3 million project is upgrading the wetland management infrastructure, which will improve management of 125 acres of wetlands. (Photo credit: Ducks Unlimited)

When it comes to preserving wetlands, Ducks Unlimited normally uses a combination of three methods: 1) protect, 2) enhance, and 3) restore.

“Depending on the site, we can buy it to protect it, our teams can enhance it and ultimately it is restored to its natural state,” says Sebastian. “It’s been a very effective process for us and we’ve saved millions of acres this way.”

Ducks Unlimited teams include specialized engineering and surveying teams who use ATVs, trucks, telemetry systems and heavy equipment. They break up the drain tiles that originally converted wetlands into farmland. They also lay down water control structures and retaining walls to prevent flooding in surrounding areas, some of which may still be active farms.

In addition to land management, Ducks Unlimited also educates farmers. While farmers sell retired farmlands, they also want to learn to use the farmland they keep more productively and sustainably. “We teach them that it is, in fact, possible for them to farm profitably and viably while reintroducing sustainable wetlands to your farm property,” Sebastian explains. “We show them it’s possible to introduce a 20 to 30-foot buffer area of wetlands on your farming plot without sacrificing productivity. We get a really positive response from many farmers. They really do want to help protect and restore wetlands.”

Government initiatives have helped a lot in getting farmers on board to reintroduce wetlands to their plots. “The Farm Bill that just passed in 2018 has really helped us. It has been one of the U.S. Government’s biggest contributions to conservation, ever,” Sebastian says. “Certain Farm Bill programs pay farmers to enroll their land in wetlands reintroduction and help the environment, encouraging them to join and making them confident the transition will be profitable for them.” 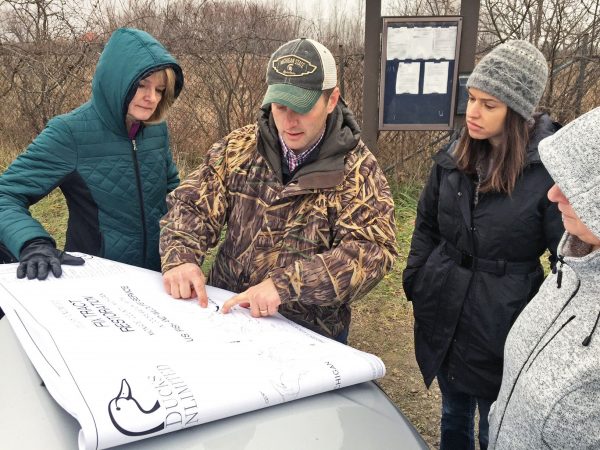 While there is a widespread view that introducing wetlands will take some viable (and profitable) farmland out of commission, Sebastian indicates this is not necessarily the case. “Often the areas where we are restoring wetlands are places on the property that was never great for farming in the first place. Some of the areas weren’t draining well or weren’t very productive for other reasons, but they make good wetlands,” Sebastian notes.

In addition to moving the dirt around and educating farmers, Ducks Unlimited’s policy work has helped get legislation enacted to promote wetlands conservation, like the Farm Bill.

“The Great Lakes Restoration Initiative of 2010 has been a great funding source for us,” Sebastian indicates. “Ducks Unlimited has used $35 million in funding to conserve about 20,000 acres.”

The Ducks Unlimited Great Lakes team includes six biologists and six engineers. Contractors are hired to do the heavy equipment work, such as earth moving.

Ducks Unlimited of the Great Lakes/Atlantic Region has its headquarters in Michigan. There are more than 60 staff members, many of whom work remotely, to manage conservation efforts, fundraising and policy across 21 states.

Ducks Unlimited is involved in many Great Lakes monitoring projects. For example, there is the Phragmites Adaptive Management Framework, which is a best-management approach taken by the Great Lakes Commission, several Departments of Natural Resources, Ducks Unlimited, the U.S. Army Corps of Engineers and other organizations to find the best way to eradicate invasive Phragmites vegetation. While Phragmites naturally occurs in the Great Lakes region, the particular type that is invasive is non-native. Techniques for controlling its spread include burning, cutting, applying pesticides and restoring natural wetland behavior. Phragmites prefers habitat where the water level is always the same, whereas natural wetlands have wet-dry-wet-dry cycles that will automatically control Phragmites. Restoring wetlands will, therefore, help curb Phragmites invasion. 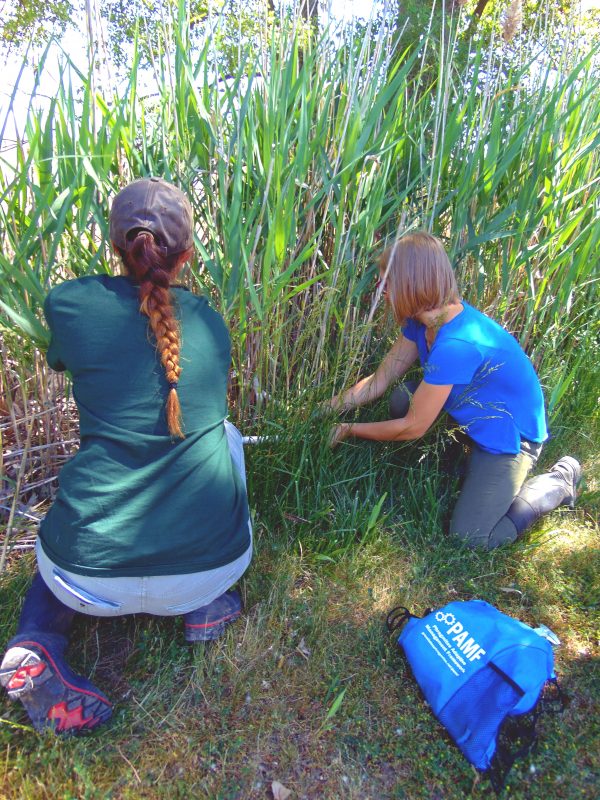 Ducks Unlimited is involved in monitoring for invasive species on the ground as well as via aerial photography.

Another monitoring project that Ducks Unlimited is involved in takes place in Green Bay, Wisconsin, an area that historically was a great place for wild rice to grow. The area is also important for migrating waterfowl. Following years of harm due to agricultural runoff, wild rice had all but died off. The current program, now in its third year, is a partnership with the University of Wisconsin to reintroduce wild rice to the Green Bay area. Records taken include water depth, dissolved oxygen, water clarity, temperature, sediment composition, carp activity (carp can harm wild rice), aquatic vegetation density and wild rice cover. The Department of Natural Resources, the Nature Conservancy and the Sea Grant Institute all provide support for this program.

There are many more projects Ducks Unlimited is involved in with respect to the Great Lakes region. A few of these are the improvement of a Detroit area state park and a popular recreation area in Michigan, restoration of the 1,000-acre Howard Marsh MetroPark wetlands and major coastline in Ohio, and protection of threatened watersheds in Wisconsin with help from a NAWCA grant.

“There’s still a lot of conservation work yet to be done in the Great Lakes region by Ducks Unlimited,” Sebastian says, “but we are always making progress, thanks to support from many federal, state, and private organizations that are as serious about protecting and restoring the Great Lakes Region as we are.”