IBuoy tracks ice drift, currents and waves on a budget 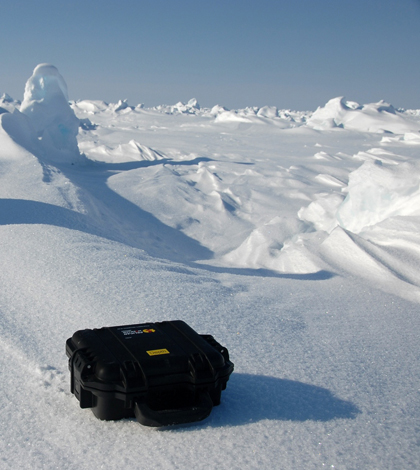 The suitcase-like box lying on the ice of the frozen Arctic Ocean last spring wasn’t a bad case of lost luggage. The black box was there as part of a test of the IBuoy, an instrument platform developed as an affordable option for researchers to track ocean currents, ice movement and other marine variables.

Scientists have long measured ocean currents and ice movement. The technology for doing so was well established before scientists at the Johns Hopkins University Applied Physics Laboratory undertook the IBouy project.

Tracking ice movements through polar marine environments often involves GPS-equipped buoys that can cost on the order of tens of thousands of dollars, according to Daniel Greenspan, senior staff at the laboratory. The buoys are left on the ice for a season, broadcasting their location as the ice drifts across the Arctic. Because the buoys are so expensive, they’re usually designed to float once the ice melts so a research vessel can retrieve them.

“That’s all very fine and good,” Greenspan said, “but if your budget only allows you to buy one or a handful of these expensive buoys, then you can’t do as much ice tracking as you can if you have a less expensive device that you could just abandon.”

That’s what drove the development of the IBuoy, a small assemblage of off-the-shelf components with satellite data telemetry that can be tailored to suit an assortment of monitoring jobs. In some applications, the cost of the buoy is low enough that researchers can desert the device at sea, saving themselves the expense of a recovery trip.

The first version of the buoy was designed to measure waves and the paths of ocean currents. The wave model of the IBuoy is packaged in a cylinder around the size of a roll of paper towels tucked into a disc-shaped float with the circumference of a large dinner plate. It was successfully tested in Chesapeake Bay in 2011, functioning as well as a commercial buoy at a cost four to 10 times less.

“And so we thought, this will be great,” Greenspan said. “We can takes fleets of these things on our research field trips, and just drop them off the boat, and we’d be able to measure vast swaths of currents.”

After developing the polar ice-tracking model, Greenspan caught a ride on the Arctic Switchyard Project, an annual research expedition to an area of the Arctic Ocean where several major oceans and fresh water from melting ice sheets meet and mix.

“It’s very interesting to study scientifically,” Greenspan said. “It’s is one of the places where you can keep an eye on how ocean conditions are changing and how they’re related to global climate change.”

The nine installations of the polar IBuoy on the Switchyard mission included a version that integrates an acoustic depth sounder. The instrument profiled the ocean floor along the buoy’s drift.

The Switchyard trip was a successful proof-of-concept demonstration for the polar IBuoy, and Greenspan will return next year for an operational deployment. As for future applications, Greenspan said he and his collaborators are on the lookout for new instrument configurations and environments to explore.