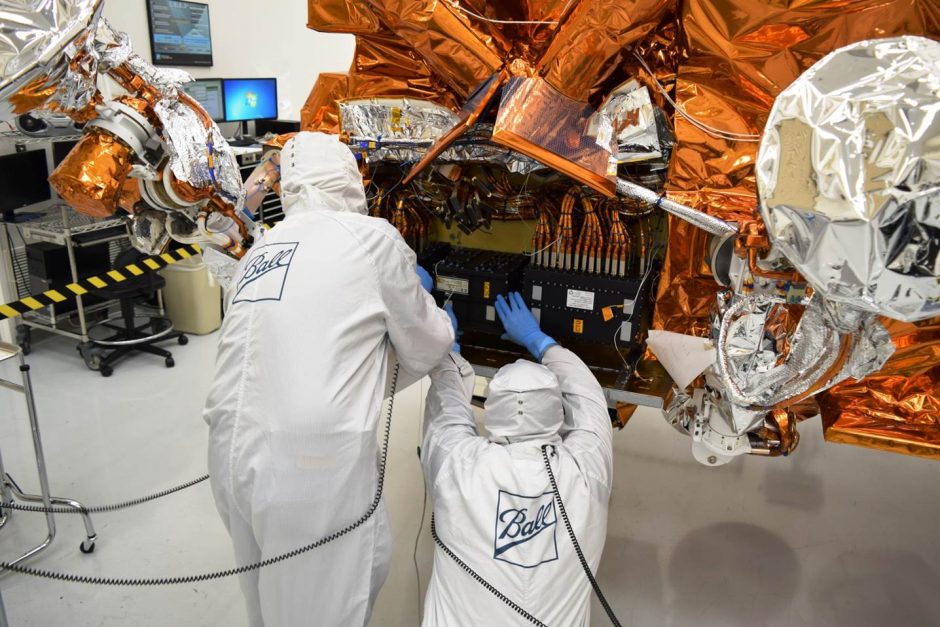 Resulting from a collaboration between NOAA and NASA, the Joint Polar Satellite System-1 (JPSS-1) or NOAA-20 satellite provides major upgrades to NOAA’s environmental monitoring capabilities. Called JPSS-1 prior to launch, the satellite was renamed NOAA-20 upon reaching orbit, following a long-standing naming tradition. The JPSS-1/NOAA-20 reached orbit on November 18 of this year. The satellite is designed to monitor the environment around the world and help improve weather forecasts. It orbits the Earth 14 times each day from one pole to the other, giving scientists coverage over the entire globe twice a day. It gives detailed information about atmospheric, land and sea conditions, gathering various types of data including sea and land surface temperatures, snow and ice cover, vegetation health, rainfall, volcanic ash information, wildfire smoke, hurricane intensity and many others.

Mitch Goldberg, JPSS-1/NOAA-20 chief scientist, says there are five instruments aboard the satellite that greatly help monitor the earth’s environment:

“The ATMS is especially impressive,” says Goldberg. “It provides global observations of atmospheric temperature and water vapor measurements through nearly all weather conditions. That means we can see through the clouds, and cloud cover doesn’t obscure the data,” he adds. The ATMS also measures sea ice, which gives valuable information to those navigating shipping routes. In addition to giving information about ordinary precipitation and sea ice, the ATMS can even measure the warm core temperature inside hurricanes which is an indicator of hurricane intensity. The ATMS is used together with the CrIS, as the CrIS can’t see through clouds like the ATMS, but it provides greater detail of temperature and water vapor in the vertical. Together ATMS and CrIS provide the critical global observations needed for weather forecasts to be accurate out to seven days. The CrIS instrument also provides information on atmospheric chemistry, for example, it can be used to track emissions of carbon monoxide from wildfires. “Our primary mission is to feed data into weather models,” says Goldberg. “About 85% of the data used in NOAA’s global forecast models comes from polar-orbiting satellites. The type of data NOAA-20 provides have been demonstrated to significantly improve weather forecasts. Over the past 20 years the accuracy of the 3 and 5 day forecasts have been extended to 5 and 7 days, respectively. The CriS and ATMS sounders are significant improvements over these earlier generation operational sounders.”

The environmental intelligence gained by NOAA’s satellites is done in close coordination with other polar satellites from other nations and organizations, such as EUMETSAT. Using the data from these satellites plus the JPSS-1/NOAA-20 will help improve the accuracy of weather and hazard forecasts around the globe, including such events as volcanic eruptions and fallout from ash plumes. “It shows the power of global weather observation,” Goldberg notes.

The VIIRS instrument aboard NOAA-20 is particularly suited to help provide critical monitoring data over polar areas. This instrument makes it possible to watch weather unfold at higher resolution than that available from the geostationary satellite data. While the geostationary data gives a 2-kilometer area per pixel for thermal signatures, the JPSS-1/NOAA-20 is capable of a 375-meter area per pixel, giving better early detection for events such as small wildfires. VIIRS can also monitor ice using a day/night band that uses the reflection of moonlight instead of sunlight off the ice. “This is important for Alaska’s dark periods, so we can help with shipping and navigation in those times. We can also see power outages. This is an important capability to have when dealing with the aftermath of events like Harvey, Irma and Maria,” says Goldberg. “We can see lava flows at night, we can even see lights from fishing boats and the data have been used to curb illegal fishing activities. But we have used the day/night band for rescues, too. We’ve actually used it to help a crabbing vessel that got lost in the sea ice.” VIIRS also has channels that detect greenness. Greenness provides an overall picture of the health of vegetation on land, with more chlorophyll signal indicating more photosynthesis and vegetation health. For oceans, it can also pinpoint areas of high productivity which is important for fisheries, and even detect harmful algal blooms that have a negative impact on coastal water quality and fishing.

OMPS data is useful when combined with cloud forecasts, to produce better quality ultraviolet index forecasts. These forecasts help inform the public about potential harm from UV damage from the sun. The instrument can also measure other atmospheric particles such as sulfur dioxide and ash that result from volcanic eruptions, which can be helpful in providing public health or aviation safety warnings.