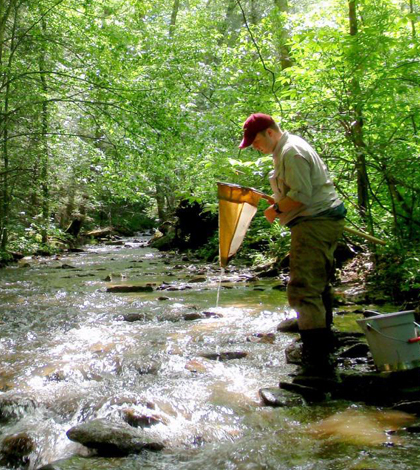 The rubble left behind after a Central Appalachian mining operation scrapes or blasts its way to a coal seam isn’t as inert as it looks.

Around a decade of research has increasingly associated compounds that leach away from the freshly exposed rocks with declines in sensitive insects that live in the headwater streams draining the mined mountain region.

But there are aspects of the relationship between bug populations and the compounds–measured collectively as total dissolved solids, or TDS–that remain unexplained. Scientists at Virginia Tech’s Virginia Water Resources Research Center are seeking answers through a stream monitoring program that is helping to keep regulators, policy makers and members of the mining industry informed.

Mining unearths long-buried rocks, exposing them to oxygen and water. This kicks off chemical reactions that release anions and cations like calcium, sulfate, magnesium and bicarbonate.

“They leach when they’re exposed to water,” said Stephen Schoenholtz, a professor with Virginia Tech’s Department of Forest Resources and Environmental Conservation and the research center’s director. “They leach into the streams and often will create high pulses of these solids that can be, in high levels, detrimental to the biota in the streams.”

Despite the apparent connection between high dissolved solids and impaired macroinvertebrate populations, the details of the cause-and-effect relationship between the two has been contentious and in need of unbiased study, he said. An effort to meet that need began when Anthony Timpano came to the research center as a graduate student in 2008. Timpano, a life-long Virginian, fostered an interest in aquatic insects while fishing in the state’s headwater streams.

“I developed an interest in these benthic macroinvertebrate communities because they’re the primary diet for trout, and we mimic them with flies,” said Timpano, now a research associate with the research center. “That’s how I learned about them as a young person, and as I grew older I realized that these organisms are a key component of biological monitoring.”

With funding from sources including two Virginia state agencies involved in mining regulation and permitting–the Department of Environmental Quality and the Department of Mines, Minerals and Energy–Timpano began his research with a quest for study sites. He sought out streams in Virginia coal fields that had elevated TDS levels but were otherwise relatively undisturbed. Focusing on streams without other stressors like sedimentation or road crossings helps isolate whether TDS levels are related to bug population measurements. Starting with a list of 250 candidate streams, Timpano visited potential sites and scrutinized past monitoring data, aerial images and topographic maps to narrow the list to 21 study sites. Although the work verified the association between high TDS and impaired bug populations, it became apparent to the researchers that their methods weren’t capturing the whole picture of the relationship between the two.

“In looking at our work, we started to realize how variable these relationships are,” Schoenholtz said. “They’re statistical, they’re rather convincing, but there’s a lot of variability and resultant uncertainty. And this uncertainty creates challenges for coal mining companies and regulators.”

One potential source of that variability is the fluctuation of dissolved solid concentrations in a stream over time–a shift that periodic spot sampling is likely to miss.

“Measuring conductivity or TDS is not a one-shot deal,” Schoenholtz said.” You just can’t go out there once or twice a year to accurately characterize stream condition. That’s what we’re finding.”

In an attempt to gain a clearer understanding of long-term TDS levels, the researchers obtained additional funding from U.S. Office of Surface Mining to expand their monitoring. The program now measures specific conductance–a surrogate for TDS–every 15 minutes in 27 streams with Onset HOBO U24 conductivity loggers. They’re also sampling macroinvertebrate communities once a month.

The continuous and higher-frequency monitoring will contribute to a clearer understanding of the mechanisms through which dissolved solids affect macroinvertebrate populations. The data could help answer important questions about the timing of TDS exposure and the structure of state macroinvertebrate monitoring programs. There is also a question of dose. Which has a more important effect on the insects: low-but-consistent levels of TDS or occasional spikes?

“This is classic ecotoxicology,” Schoenholtz said. “Are bugs more susceptible to being chronically exposed or is exposure to very high levels occasionally causing declines in bug communities? Huge questions still remain that we all need to work on as we try to hone in on how to best manage these resources.”

In the meantime, the research center’s findings have gone on to state agencies, federal agencies, and coal companies to help inform standards and regulations. Though coal extraction is a controversial issue in the region, the center strives to remain an impartial source of good science, Schoenholtz said.

“Our agenda is to publish research, do good work and provide unbiased information for this decision process, which is very complicated,” he said. “It really makes for an exciting place to work and hopefully will make a difference somewhere as we grapple with how to utilize resources, and at the same time, sustain these resources for future generations.”