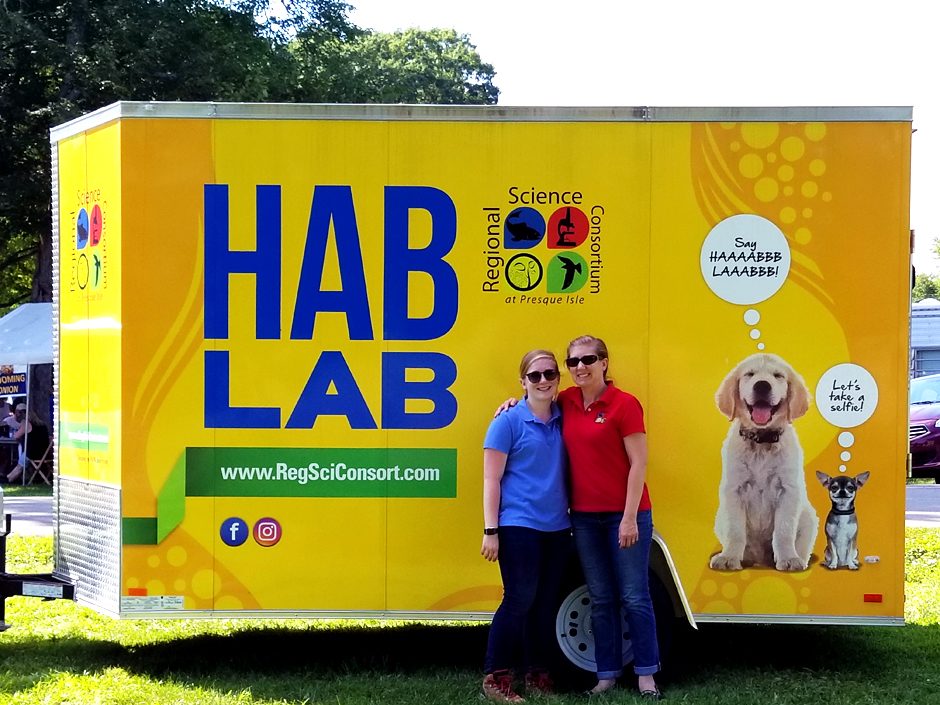 Dr. Jeanetts Schnars (red shirt) and RSC Lab Technician, Morgan Schnars at Pymatuning State Park’s 1st Annual Onion Festival where the Mobile HAB Lab (MHL) educated 243 visitors. Notice the side of the Mobile HAB Lab is a “selfie station” which includes the website for more information about HABs; this is to reduce the number of print material (brochures, etc.) that the team needs to distribute. (Credit: Jeannette Schnars, RSC)

News stories about dogs getting sick from harmful algal blooms (HABs) in lakes have caused worry among members of the public this summer more than once. But Regional Science Consortium (RSC) Executive Director Dr. Jeanette Schnars and a dedicated team are bringing awareness about HABs to the public with the Mobile HAB Lab.

“We just launched the HAB Citizen Scientists program this year,” explains Dr. Schnars. “It helps us work with people, especially people who spend time at marinas frequently, that are out there all season long.”

The season for boaters at Presque Isle, where RSC is located, starts in mid-May and usually continues through the beginning or middle of October. During the summer season, many people spend time at the Presque Isle marinas or different parts of the lakeshore, so they can help the monitoring team spot HABs more rapidly.

“Harmful algal blooms come in quickly sometimes, so you might even see one early in the day, and then by later in the day the water has flushed it out and moved it on somewhere else,” states Dr. Schnars. “So those citizen scientist observations allow us to have more overall information about where harmful algal blooms and the toxins that are causing them might be.”

Jeanette: “That’s what we are doing in the lab. Once a week we are testing for the toxins that are produced by harmful algal blooms. We are also looking at the blue-green algae probes on our nearshore buoy and our Beach Two buoy. So we can get some information from them, but we are actually monitoring toxin concentrations every week as well.”

That frequency is important to the team.

“If we could do it more often we would,” adds Dr. Schnars. “We try to do it on Thursday so we have information ready for that weekend time when more people are likely to be recreating in the water.”

The kind of monitoring the team does focuses on four toxins.

“Microcystin is probably the most common one around here, so that’s the one we do every week,” Dr. Schnars describes. “We test for Anatoxin-A twice a month, and both Cylindrospermopsin and Saxitoxin we test for once a month. If we could increase some of those to once a week, we would like to do that.” 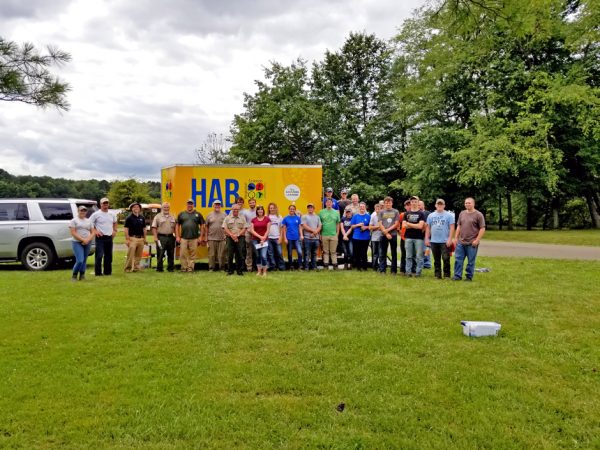 Testing for anything in water presents a tough problem for scientists. This is an even bigger challenge for a team hoping to cover a place like Presque Isle State Park, an area that receives over 4 million visitors a year—more than Yosemite or Yellowstone.

“Because blue-green algae is in water, it moves,” remarks Dr. Schnars. “We sample at over two dozen locations, almost the entire shoreline of Lake Erie in Pennsylvania. We have sites almost all the way to the Ohio and New York borders. We sample around Presque Isle Bay, and around the peninsula that goes out into Lake Erie where Presque Isle State Park is. Most of the people that visit are coming to recreate on the water, so we try to monitor as often as we can and have that information available.”

One of the reasons the issue is confusing to the public has to do with thresholds and man’s best friend.

“When we monitor, we look at the concentration of the Cyanotoxin,” Dr. Schnars says. “We have different thresholds, including a level that is safe for dogs, a human advisory recreational level, and a human level where it’s no contact. We’re exceeding that dog threshold pretty often, so property managers for the Erie County Department of Health and Presque Isle State Park will post advisory signs at those sampling locations when we do.”

However, although the team has been testing for Microcystins since 2014, they have noticed that although they post warning signs, people don’t necessarily understand what those signs mean.

“The sign says, ‘Toxic Algae,’ and it has a ‘no’ circle with a line through it with a dog in the middle of the circle, so it seems like no dogs allowed,” explains Dr. Schnars. “People just didn’t know exactly what that means. What is toxic algae, what are HABs? So we received an environmental education grant from the Pennsylvania Department of Environmental Protection to create the Mobile HAB Lab.”

A source of friendly information

The HAB Lab team wants the public to know that they are not there to scare anyone out of the water.

“It is just an awareness campaign focused on what blue-green algae is, how it comes about and other things in the environment that can cause HABs,” clarifies Dr. Schnars. “For example, the things that happen on land like nutrient runoff really contribute to that problem, so we talk about what people can do to reduce the amount of nutrient loading that goes into the water.” 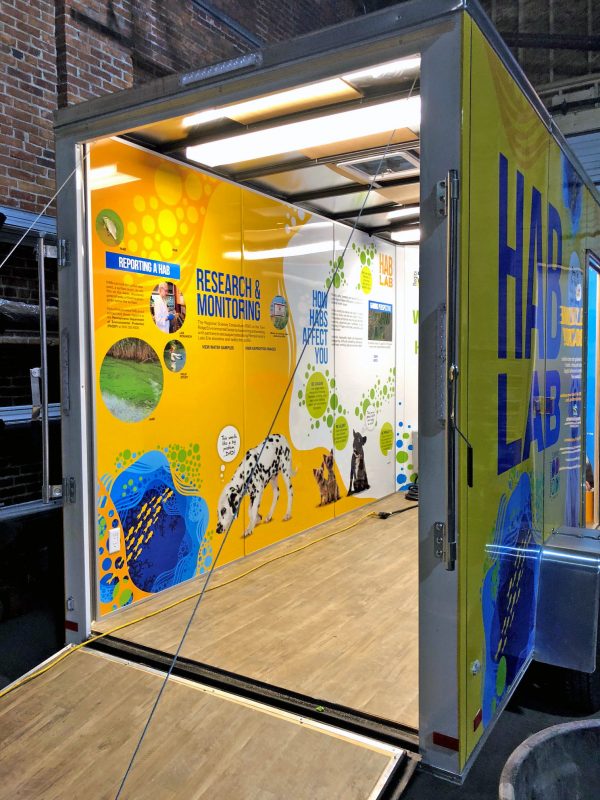 The interior of one of the panels of the MHL. All the panels in the interior exhibit provide information on: 1. What is a HAB? And what is not a HAB; 2. How HABs affect you; 3. How HABs grow; 4. Research and Monitoring by the Regional Science Consortium; 5. What you can do; and 6. Reporting. (Credit: Jeannette Schnars, RSC)

Part of the issue with any problem like this is the need to strike a balance. It’s critical to raise awareness, but people worry about things like tourism in the region, and rightfully so.

“We even experience that with some of the managers,” comments Dr. Schnars. “They did not want to scare tourists or visitors away from a very popular site for boating, fishing and swimming. We completely agree, so we just say, hey if it looks like this, we have plenty of beaches at Presque Isle State Park, so try a different beach. It’s a 3,200-acre peninsula, so it’s not really too far to go to the next beach down.”

The Mobile HAB Lab makes pets their priority because they know how important the issue of pet safety is to the public.

“People just like to get their dogs outside when it’s this time of the year because we’re finally able to go outside, there’s no snow or ice or blizzards. Dr. Schnars comments. “It’s not just Lake Erie, we have other lakes in this region that have the same issue with nutrients and blue-green algae blooms.”

“We did not want anything to happen to any pets,” continues Dr. Schnars. “A lot of people bring their dogs to the beach, and the dogs go in the water and play and consume some of that water. Then they come out and they groom their coats and they end up ingesting a lot of these blue-green algae cells.”

Dogs are far more sensitive to the toxins that these blue-green algae produce than humans are, and they also have a tendency to ingest a lot of them.

“On our Mobile HAB Lab, there’s a big dog on the outside, a Labrador retriever,” quips Dr. Schnars. “As you go through there are different dogs that are leading you through the exhibit and telling the story: ‘Hey, keep me out of the water during this time because it’s not safe.’”

Dogs exposed to these toxins may experience seizures or even death.

“Some people do ask, if their dogs can’t go into the water, then how is it safe for people? Dr. Schnars adds. “So we also explain that they’re just very susceptible.”

The HAB Lab team is hoping that their work helps people in the region see the connections between recreation, water quality, and health.

“After years of worrying about water contamination by heavy metals or organics like PCBs, we’re in a different phase, with additional water quality issues that we need to be concerned about,” comments Dr. Schnars. “It’s very important for drinking water because it is a large body of freshwater, and it’s also really important to our tourism and recreation in this area.”

In the meantime, the team is also training citizen scientists. That part of their work creates awareness and also provides additional observational monitoring.

“It’s actually providing a lot of good additional data for us that we wouldn’t have without all those eyes watching what’s going on with the water,” states Dr. Schnars. “They’ve also been trained, so they can warn others about keeping their dogs out.” 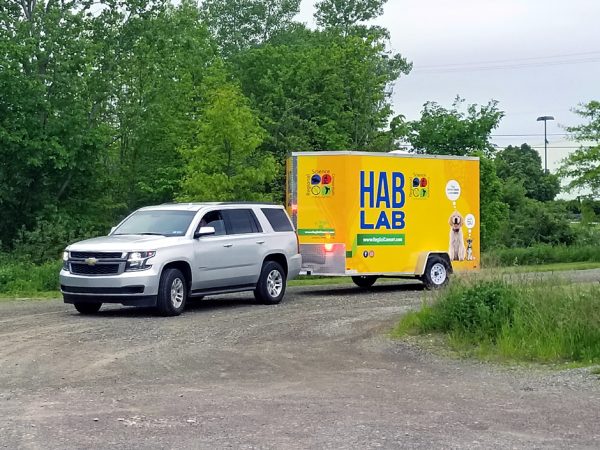 Mobile HAB Lab on the move! The team is traveling far and wide to educate people on HABs. The focus is the high sensitivity dogs have to the cyanotoxin produced by HABs. (Credit: Jeannette Schnars, RSC)

When citizen scientists do spot something, the HAB Lab tries to make an appearance.

“When we do have a sign that’s posted at one of our sampling locations during an exceedance, education staff here can take the Mobile HAB Lab down to where that sign is and educate people as it happens.” Dr. Schnars says. “We’ll also take a sample if possible, and then evaluate it under the microscope to see what species are there and if they are toxin-producing species.”

The Mobile HAB Lab serves all of the state, not just the Great Lakes region.

“Because the Mobile HAB Lab is mobile, we are able to go to other areas of the state. There are other inland lakes, bodies of freshwater, and we can go to different state parks or recreational areas for outreach. Right now a lot of the focus is on Lake Erie because the western basin has more intense blooms than we do. A mobile display unit allows us to travel anywhere and talk to people so they don’t have to come to our Tom Ridge Environmental Center, we can go to them, including school groups.”

Meanwhile, the lab continues to serve as a powerful tool and a kind of proof of concept—even when parked.

“We’ve had it parked right here at our building and have kind of done tours of our research wing and our different labs, and then we go outside and have the Mobile HAB Lab right there and do a tour of that as well,” comments Dr. Schnars. “We’ve had people come through and ask very specific questions about how we built it, how much it cost. It gives me the feeling that other people are interested in doing similar projects. Every time I show it to people, they are intrigued.”