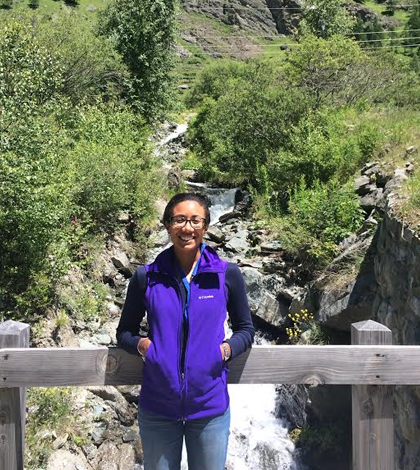 While most people tend to think of hurricanes only in terms of the damage they can cause to people, goods and buildings, Ana Barros, professor of Civil and Environmental Engineering at Duke University, knows there is another side to hurricanes.

She recalls a news story she read about an ongoing drought: “There was a farmer in the story, and he said, ‘What we need is a good hurricane.’ It made me think about the possibility that hurricanes may provide something to the land that is beneficial, or maybe even critical.”

She has since worked to elucidate the ways that hurricanes can actually benefit the environment, including adding much needed rainfall eventually leading to dramatic increases in carbon uptake of trees in a region.

Along with Lauren Lowman, a doctoral student, Barros has been developing a model which helps describe and predict the coupled water and carbon cycle behavior by including hydrological and photosynthesis inputs, and incorporating the significant influences hurricanes have on these processes after landfall.

Most of the recent modeling work has been done using data from 2002 to 2012 in the American Southeast. Temperature, humidity and cloud-forming parameters are used as forcing variables to drive weather to obtain surface-flux behavior. High-resolution satellite data were also used.

“We chose the Southeast U.S. climate because it was unique in its hurricane activity. We could definitely see differences in the model results depending on whether we left the hurricane input in or not,” Barros says. “However, it was also clear that there are definite variations from year to year.”

Barros says that 2004, for example, would have turned out very differently were it not for hurricanes.

“When we looked at the modeling results once we took out the precipitation input from the hurricanes that occurred that year, it was clear that, were it not for the hurricanes, 2004 would have been a severe drought year instead of a year with adequate precipitation,” she says.
Differences due to hurricanes in terms of impact on the region’s water and carbon cycles are not evenly distributed, which makes analysis more complex. “Regions with shallow soils will typically show the most differences between hurricane and non-hurricane impacts.”

In 2004, there were seven hurricanes and that compensated for the lack of precipitation the rest of the year and it ended up being a year of adequate wetness. In 2007, on the other hand, the Southeast saw a drought, and it was clear that a lack of hurricanes that year was the cause of it.

Other important factors are the severity of the hurricanes and the timing of when they occur. Some storms occur at the right time to positively influence the growing season while others don’t. Also the effects of hurricanes are different depending on whether the storm track is in the Piedmont of the Blue Ridge Mountains or the coastal plain. “Stability is affected by hurricanes, as you can get flooding and high erosion, which means you can lose the nutrient-rich upper layer of the soil. The response of the soil is also dependent on where the flooding occurs. In the Piedmont and coastal areas, you won’t see as much flood response as you will in urban and also mountainous areas, which see a lot more runoff,” says Barros. “The Piedmont and coastal area natural landscapes’ hydrology is adjusted to heavy rainfall from these systems and rivers run at bank-full capacity but flooding is limited away from landfall areas.”

In addition to their impacts on soil, hurricanes can affect transpiration and evaporation processes, both important parts of the carbon cycle and water cycle.

“There is a close relationship between hurricanes and carbon uptake because of the activity of the stomata in the tree leaves,” says Barros. “If you have higher soil moisture, the stomata will be open and more transpiration will occur, meaning more photosynthesis and carbon uptake compared to conditions where vegetation is water-stressed. When there is low moisture, trees can close the stomata in their tree leaves in an attempt to hold on to the little moisture they have. When this happens, there is less photosynthesis and therefore less carbon uptake.”

The model used by Barros and Lowman did not appear overnight: It has taken over 20 years to develop. In addition to Barros and Lowman, several doctoral and master’s students worked on it over many iterations.

“The model development dates back to the early ‘90s,” says Barros. “I felt the models already out there didn’t incorporate soil moisture properly. The land/atmosphere boundary conditions did not seem to be correct.”

Along the way, the influence of groundwater was added to the model. Upper and lower soil factors were coupled. And it became a distributed hydrology model. Photosynthesis was added also because scientists found there could be huge differences depending on the timing of the greening of trees.

Later, more complex coupling to aquifers was added. From there, effects from vegetation and the carbon cycle overall were included. Phenological effects, or those from tree leaves as they open and close, were also incorporated. Because of all the improvements, Barros says they can better predict flash floods.

In terms of what Barros would like to see in the future, she says they would like finer-resolution satellite images to better represent surface conditions. Mountainous regions are currently more difficult to determine than is ideal and it would be beneficial to have better representation of recharge areas, which depend on local geology. It would also be good to represent groundwater better.

Barros was surprised at the magnitude of the impacts that hurricanes had on vegetation, along with the water and carbon cycles in the results. “The impact was an order of magnitude higher than what we first expected,” she says.