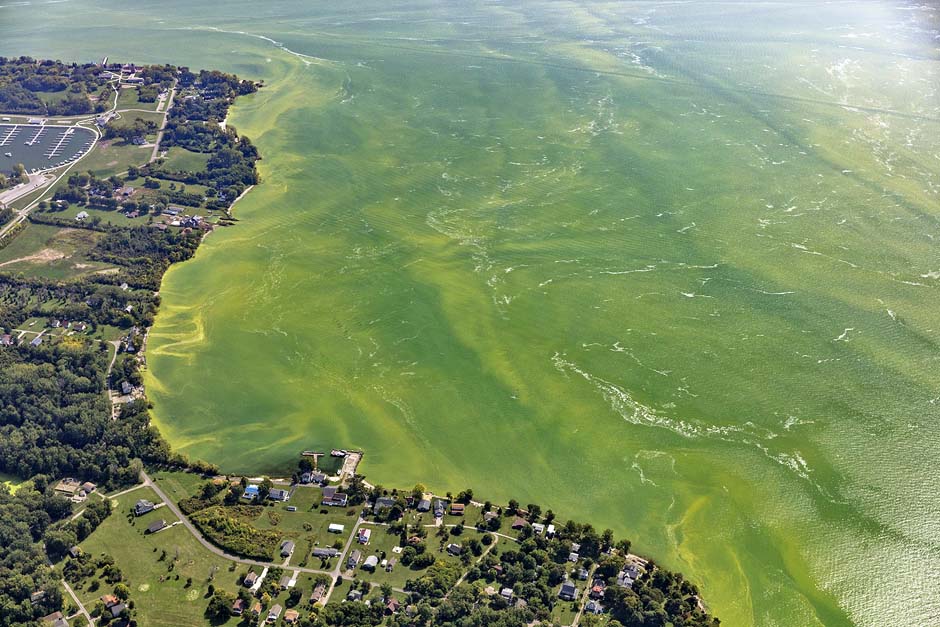 The fight against harmful algal blooms is getting a bit quicker, nimbler and more precise thanks to new technology that provides a cell-by-cell, colony-by-colony view of bloom make up and toxicity.

“Typically a cyanobacteria community is highly variable. Certain species will dominate one week such as Microcystis aeruginosa (Fig. 1), and then another will dominate the next week or so,” said Dr. Scott Gallager, president of CoastalOceanVision, Inc. a company that hopes to change the way algal blooms are monitored with their new technology, Continuous Particle Imaging and Classification System (CPICS) and HABStats, a Raman Imaging Flow Cell Cytometer.

The instruments, which measure algal blooms with a combination of imaging and spectroscopy, will provide water quality managers with a new, real-time monitoring tool to keep water safe and accessible.

CPICS is an underwater microscope that captures images of and identifies the microscopic single-cell or colonial alga and cyanobacteria by species using Deep Learning artificial intelligence.

But because some species of algae can look similar to each other, HABStats further characterizes and classifies each cell or colony using Raman spectroscopy, a vibrational spectroscopy. A laser shines intense monochromatic light on each cell, causing its molecules to vibrate and shift the spectrum of light reflected back. Molecules reflect a unique spectrum of light, which HABStats analyzes to more finely identify each species of algae.

“That shift in wavelength is a function of specific chemical compounds and molecular structure,” said Gallager. The light each algal cell reflects back “can be considered a fingerprint of a specific group of compounds representing a cell.”

Those specific compounds might be unique to an algae species and useful for determining what type and how many of a given species is present.

The specific compounds detected might also be toxins. Since toxic algae can vary in toxicity over their life span, Raman spectroscopy gives HABStats a snapshot of toxicity within an individual cell at a specific moment in time.

With near constant monitoring, the algae and toxicity identification can track an algal bloom’s make up and level of toxicity in real-time.

CPICS and HABStats use a deep learning model, so with each image and spectrum identified, they get better at identifying the next one (Fig 2). 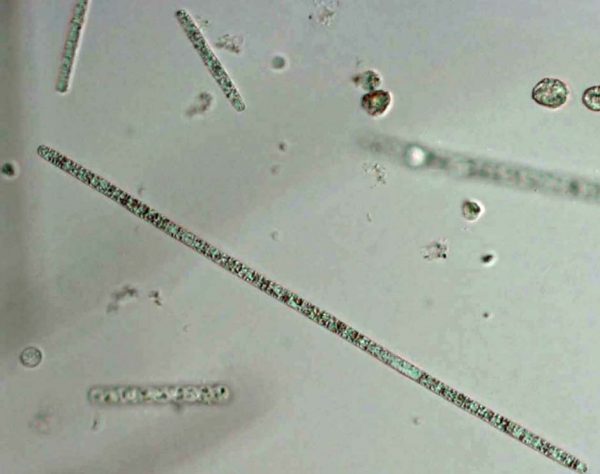 The current methods for monitoring algal blooms are slower and more labor-intensive than necessary, Gallager said.

A city’s water manager needs to keep an eye on algal blooms. A toxic bloom can cause disruptions to drinking water supplies, as it famously did in Toledo, Ohio, in 2014.

Oftentimes, drinking water managers rely on manual sampling and identification of algae. After water is collected, cells are counted and identified under a microscope by expert algal taxonomists. Managers know they might have a problem if cell counts are too high for problematic cyanobacteria like Microcystis, a fairly common freshwater cyanobacterium that can produce the liver toxin microcystin.

But, just knowing a drinking water source has too many potentially toxic cells doesn’t mean it’s toxic at that time. A specific and complex toxicity test needs to be run. That’s a test many cities aren’t equipped to carry out and samples may need to be sent away to another lab to be analyzed, which could take up to several weeks, in some cases, Gallager said.

By identifying cyanobacteria species and quantifying toxins in the field, these instruments go a long way toward “eliminating the taxonomist,” Gallager said. They could represent big savings in time and money in water quality management.

A More Dynamic Way to Monitor

Because CPICS and HABStats can relay such specific information to a central website in real time, they might help researchers not just monitor algal blooms for threats to drinking water, but better understand how they work.

Several instruments positioned throughout a water body could reveal in fine detail how algal blooms grow and develop or move around on a windy day.

Tests have already provided insight into the daily movements of cyanobacteria in a lake on Cape Cod, where the system is being tested.

“They’re migrating from depth up to the surface and then back down to depth in a period of 24 hours,” Gallager said. “By taking hundreds of samples per minute, we’re able to characterize that behavior very accurately. And that kind of data just didn’t exist before.”

This vertical migration may occur because of physiological processes within the cells: Carbohydrates build up in cells when they photosynthesize near the surface. The heavy carbohydrates cause them to sink where, away from the sunlight, the cyanobacteria consume the carbohydrates through respiration. The production of Nitrogen gas in the morning then makes the newly buoyant cyanobacteria float to the surface again.

Raman spectroscopy is revealing changes in carbohydrates within the cyanobacteria that might explain how and when colonies are migrating up and down within the water column, Gallager said.

Gallager believes that, although it has passed every test so far, HABStats needs to pass a few more before it’s ready for prime time.

This summer, it will be out in Lake Erie’s Sandusky Bay where it will help Dr. Timothy Davis, a Ryan Family Endowed Professor at Bowling Green State University, study the bay’s dynamic toxic cyanobacterial blooms.

“These blooms are much more dynamic and change much more quickly than we currently can measure,” Davis said. The much finer resolution provided by HABStats could push researchers’ knowledge of cyanobacterial blooms forward.

Sandusky Bay’s blooms are dominated by Planktothrix agardhii, a common bloom-forming cyanobacterium. Planktothrix agardhii has toxic and non-toxic strains that look identical under a microscope. Identifying and quantifying total Plankothrix populations is only part of the picture. HABStats’ Raman spectroscopy will identify whether or not the microcystin-producing strains are present and what percentage of the total Plantothrix agardhii population they represent.

HABStats could be useful beyond the near real-time view of the bay’s cyanobacterial blooms, Davis said. Davis and his BGSU colleagues sample Sandusky Bay at nine different sites on a weekly basis from June to October. Higher-resolution data could be useful in developing more accurate predictive forecasts of bloom toxin concentration.

Assuming the testing goes well this summer, HABStats could be ready for prime time soon and change the way algal blooms are understood.