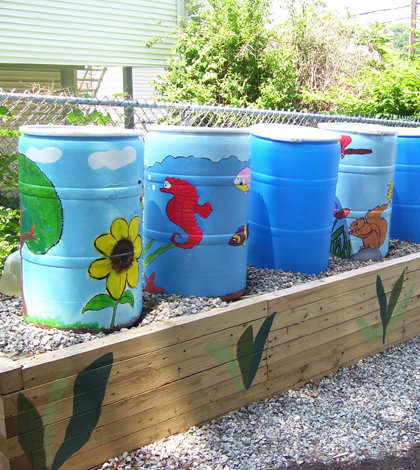 When designers from Manhattan-based environmental engineering firm eDesign Dynamics first saw the patch of land across from Thirteenth Avenue School in Newark, New Jersey, they knew they had their work cut out for them. It was covered with demolition fill, litter and clay-heavy soil – not an ideal setting for a rain garden.

But luckily they had something more than just a rain garden in mind.

“I would call it an integrated rainwater management system,” said Eric Rothstein, managing partner at the firm. “Rain gardens usually have a gravity feed. They’re retention-based systems. This was a re-use system first and an infiltration system second.”

The project, which collected water to irrigate a nearby community garden, is part of an effort to see how green infrastructure can help reduce runoff flowing into sewer pipes. The city’s combined sewer system occasionally overflows, sending untreated sewage into the state’s waterways, which contributes to high bacterial levels in New York-New Jersey Harbor Estuary.

To get rid of the filth and replace it with something useful, debris and other buried items were taken out of the ground and replaced with a sump for sediment removal, a cistern for water storage and an infiltration gallery that helped with water retention.

Most of the construction was done by ex-convicts participating in prisoner reentry programs overseen by the Greater Newark Conservancy. “Newark has partnerships with nonprofit groups doing a lot of the work,” said Rothstein. “Newark has a lot of ex-convicts and high unemployment. These were adults working hard and gaining valuable skills.” Students from Thirteenth Avenue School got to help in the design phase, contributing ideas in brainstorms. “We saw it as a real advantage being across from the school. It’s an amenity for the community and the students,” said Rothstein. And the ideas they pitched made for a smart system.

Rainwater flows to the storage cistern and then to the infiltration gallery. A treadle pump moves water from the gallery to rain barrels on raised above-ground beds. This location provides for easy garden watering.

But data revealed the system’s biggest benefit – it reduces the amount of rainwater going into the city’s sewers. Total rainfall entering the system is measured by a tipping bucket rain gauge. Water level in the infiltration gallery is measured by a series of pressure transducers. These sensors revealed that 13 percent of total captured stormwater is prevented from reaching the sewer, said Rothstein. Testing for conductivity, dissolved oxygen, pH, E. coli and chlorides also show water quality improves as it moves through the system.