Not So Quiet Polar Night: Arctic Creatures Found to be Active During Dark Part of the Year 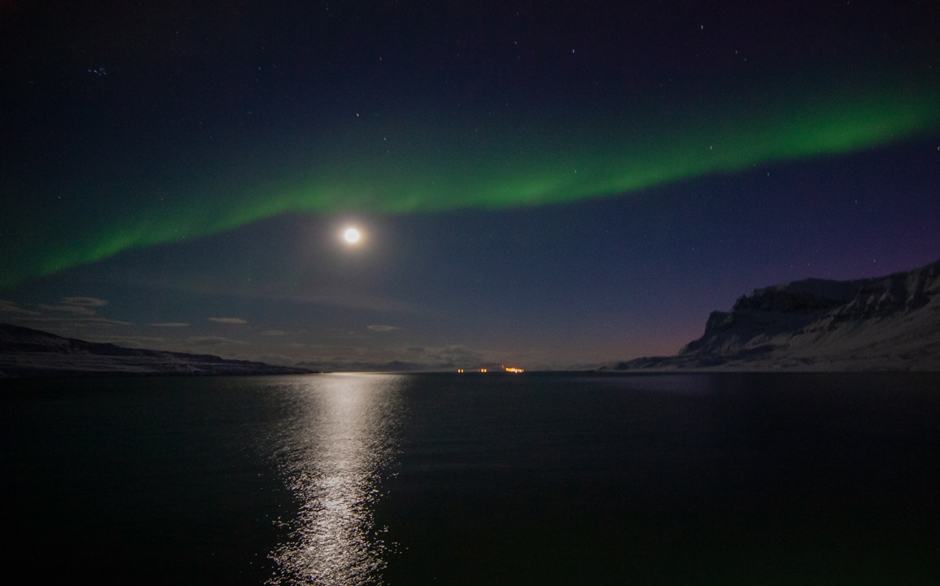 Light during the polar night in Svalbard, including light from the sun below the horizon, moonlight, aurora borealis, and artificial light (Credit: Geir Johnsen)

Most people need little more than a comfortable pillow, a blanket, and a dark room to drift off into a multi-hour snooze. Many researchers assumed that once plunged into darkness for about half the year during the polar night, most polar creatures would do the same: fall asleep and take a big nap for as long as the darkness lasted. But Jon Cohen, associate professor of marine sciences, school of marine science and policy, in the College of Earth, Ocean, and the Environment at the University of Delaware, wondered if that was true. Despite the technical challenges of monitoring biota in very low light conditions, Cohen and his team were determined to find out if krill, copepods, and other creatures were dozing off in the dark or seeking out prey, light, and each other.

“The polar research has an interesting starting point: I got to thinking about how light affects animal physiology, and I became drawn to deep ocean work, where light is so limited animals produce their own: bioluminescence,” Cohen reflects. “For me, investigating low light conditions naturally led to research at the poles, focusing on the arctic.”

For half the year in the arctic, the sun is under the horizon, and low light reigns–this phenomenon is referred to as the polar night. The other half of the year, the sun is above the horizon, and the sunlight bathes the land and water all day during spring and summer. “Measuring light during the sunny part of the year is not too difficult,” says Cohen. “Measuring light during the polar night—the period of the year we were interested in—is much harder technically. There weren’t a lot of commercial solutions available for us, so we had to devise our own. A lot of the sensors that were available didn’t work very well in really low light.”

Measuring light and determining how much light was present was a technical challenge, but there were many other challenges as well. For example, if light is detected, there has to be a method that shows that the organisms can detect the light also. There is also the issue of artificial light vs. natural atmospheric light. “People don’t always think about this, but artificial light from buildings, ships, towers, and even in our case, research vessels, can be significant for biota, especially in low light environments,” says Cohen. “We can see creatures swimming away from…or towards…our research vessel, for example, as they react to the light it’s giving off. Their reactions to the artificial light will influence which of these creatures we see and how many.” Cohen and his team had to factor this behavior in their estimations of biota numbers. They also had to come up with ways to modify sensors or create other sensors to be able to measure light and light reactions of biota in polar night conditions.

“To get a good picture of light in the polar night environment, we had to modify our light sensors. We had to be able to capture the photons that animals were actually using to perceive light,” Cohen explains.

1) How much light is there?

2) How much can animals perceive?

3) How does that change over time?

Cohen’s team wanted to get a holistic sense of the biological dynamics of various biota, even when the sun they get is under polar night conditions.

Cohen and his team were surprised to find that, not only was arctic life not dormant during the polar night, but were instead detecting each other, predators were finding prey, and the small amount of light available during the polar night was nevertheless sufficient to regulate the biological clocks of the marine biota studied.

Cohen also emphasizes that both natural and artificial light affect biota in the middle of the food web (which Cohen’s team focused on), such as krill, copepods, and fish. “Natural light includes things like moonlight or sunlight, and light the creatures generate themselves, namely bioluminescence,” says Cohen. “Artificial light is anything the creatures are coming into contact with that is human-generated, such as light from street lamps, buildings, ships, and even research vessels. While it may not occur to most people, a research vessel casts a pretty large shadow, but lights can be coming from the cabin or deck. All of these things can impact the creatures we’re trying to study, especially in such low light conditions. So we need to be aware of all the possible light influences on the creatures.”

Cohen’s major findings are that, yes, the polar night has measurable light detectable by humans, fish, zooplankton, and other marine creatures. Not only can these creatures detect it, but it also is biologically relevant light and acts to set their biological clocks. Cohen mentions, “Interestingly, we found the organisms we studied had a rhythmic biology with the sun, even when the sun was below the horizon.” 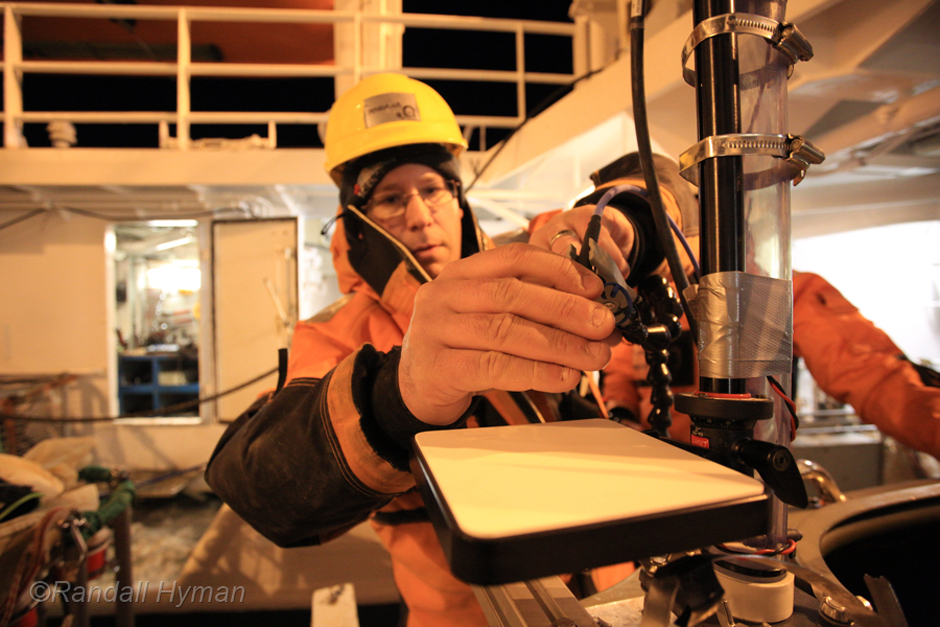 Cohen’s team used autonomous vehicles to study water acoustics surrounding the creatures. The researchers used acoustic Doppler profilers. Moorings were used for some instrumentation to keep it in place.

“Light measurements apply to other organisms, too, not just the middle of the food web biota,” Cohen notes. “We could potentially collaborate with other research groups studying other biota. We could learn to understand how light applies to terrestrial organisms and to other types of marine organisms not yet included in our research, such as macro algae and kelp.”

Cohen took a wide range of data, including spectroradiometric data and data using PAR sensors. In some cases, commercial spectroradiometers were used with the added improvement of light measurements being taken off a reflective plate, which improved the sensitivity of the instrument in such low light conditions. “For that data, sky light comes down and bounces off the reflective plate, and a photometer picks that up,” Cohen explains.

In order to utilize all available light for their measurements, radiometrically-calibrated cameras were used to gather all sky light (wide field image) and incorporate it into PAR measurements. In addition to getting a good picture of what light is present, they obtained a picture of organisms’ positions and reactions to the light they pick up. “We ultimately get a picture of the distribution of the organisms in space and time,” says Cohen. “We collect them and expose them to light under electrophysiological conditions where we can see changes in their eyes. We capture the wavelengths and intensities we see in their retinal cells, and that tells us their response to light.”

The biota are collected with nets or tracked using acoustic Doppler profilers and broadband acoustics.

“We look for the biota reaction to the light. We look for them either swimming towards or away from light,” says Cohen. For some experiments, locomotor activity monitors were used– printed circuit boards with infrared emitters and detectors (weatherproofed for seawater). For those experiments, the organisms are in test tubes, and whenever they move towards or away from the light they are exposed to in the test tube, the infrared light path will be broken, and the computer will detect it. “That’s how we detect organism movement in the laboratory,” says Cohen.

Cohen and his team used a variety of approaches to determine how active the animals are at day and night.

“We were also able to detect and track their natural bioluminescence when applicable,” says Cohen. “The bioluminescence readings were recorded by bathyphotometer, which basically sucks in organisms, causes them to glow, and spits them out the other end of the instrument.” 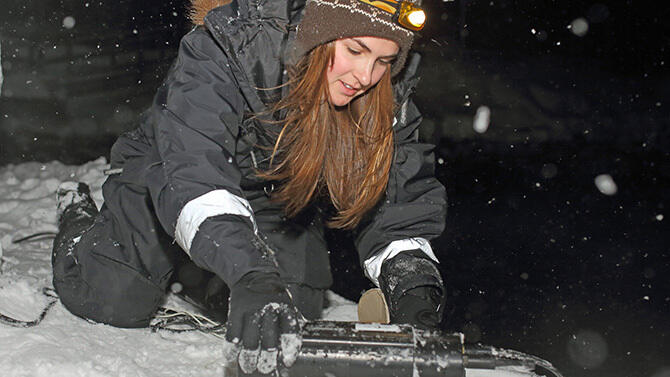 Generally, in terms of overarching goals, Cohen and his team are pleased with the progress they’ve made technically, and Cohen believes they have done well at measuring light during the polar night by coming up with innovative ways to measure very low amounts of light and biota’s ability to detect it. Next, Cohen hopes to understand autumn and spring better, where light is abundant. He also wants to understand what’s happening across years of polar nights and how climate change affects biota dynamics.

“International researchers I worked with, and honestly, my own team, we all thought all the biota would go to sleep during the polar night but that doesn’t happen: in spring we have algal blooms. We see that fish and krill and copepods haven’t been sleeping, they actually have been making themselves poised, and ready to take advantage of the abundance of food in spring,” Cohen says.

In terms of polar biology research trends, Cohen says researchers are curious about how polar night systems will be altered by climate change. “We expect these changes to be complex,” notes Cohen. “With less sea ice, biota could get more light, or they could get less. So what ultimately will be the effect of losing sea ice? These are questions that exist at the intersection of light and biology.”

Studying the effects of artificial light at night on biota is another emerging field of study. “The LEDs emit strongly at wavelengths that organisms can detect, and we need to know how this impacts them and does it impact them enough to disrupt normal behavior,” Cohen mentions.

In the future, Cohen hopes that low light detection sensors and analysis technology will continue to develop, making data collection and handling easier. He also hopes to see more connections between marine and terrestrial research in polar biology.

“I think this is already happening,” he says. “We’ve already made some great strides. Just the fact that we know now that biota are active during the polar night, not dormant like we thought, is a part of a big step forward in our understanding. Next will be linking marine and terrestrial knowledge of the polar night.”