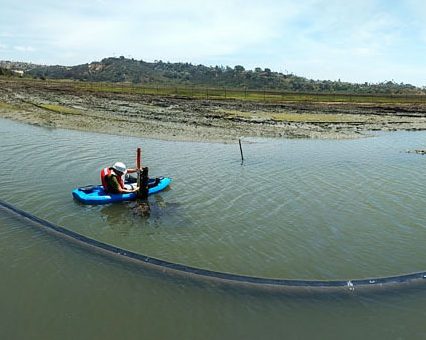 Before Bradley Nussbaum started working at San Elijo Lagoon Conservancy four and a half years ago where he now serves as Habitat Management Director, he had not held a similar position at another nature reserve. In fact, he was on a completely different career trajectory. “I studied and worked as an optical engineer,” Nussbaum explains. “After doing that for a couple years, I realized that what I really wanted was to be outside.”

The almost 1,000-acre wetland of the San Elijo Lagoon Ecological Reserve turned out to be just the habitat Nussbaum was looking for. Since 1987, the Reserve has also provided an excellent habitat for over 1,000 species of plants and animals, including the federally endangered Ridgway’s rail and the regionally threatened snowy plover. People are also drawn to the Reserve because of its seven miles of trails for running, hiking, dog walking and spots for nature photography. “It’s a special place. It’s exceptional in that it hasn’t been developed like everything around it,” says Nussbaum. While the Reserve is an oasis of nature, it is bordered by not one but three cities: Encinitas, Solana Beach and Rancho Santa Fe.

Water quality monitoring is fundamental to monitoring the overall health of the Lagoon. To keep track of water quality in real time, four multi-parameter sondes are currently used. These are a mixture of YSI EXO2 sondes and the older YSI 6600 sondes. “They are both used for 6-7 week deployments and they give great, reliable data and they have terrific optical sensors,” says Nussbaum. “These newer sondes are a big improvement over the 600 XLM sondes we used to have, which we could only use reliably for two-week deployments.”

There are four sonde stations spread throughout the three lagoon basins. The sonde stations allow for continuous water quality monitoring and give a good temporal picture of variations in water quality. Weekly water samplings are also taken using a YSI Pro Plus handheld. “We get our dissolved oxygen readings at the lowest level of the day, which is at sunrise before photosynthesis starts,” says Nussbaum. “We start our sampling at the ocean, which is our baseline level. We progress through seven sampling locations down the main channel until the weir which is the edge of the tidal influence.” 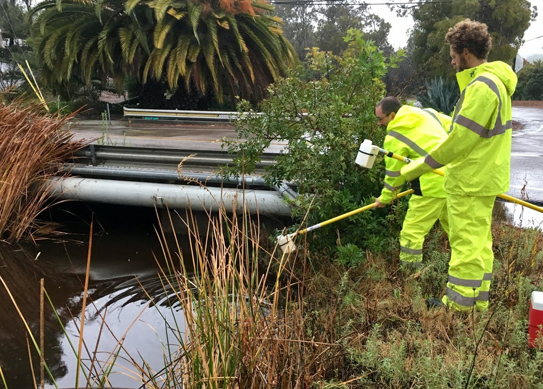 The main driving force for the character of the lagoon is its incorporation of dissolved oxygen in its waters or lack thereof. “We do a lot of dissolved oxygen monitoring because it has such a big impact on the life in the lagoon,” says Nussbaum. “We are especially concerned about hypoxic conditions.”

The lagoon is hemmed in by a railroad, the I-5 highway and the Pacific Coast Highway 101 (PCH-101). Especially noteworthy was that the PCH-101 was built right over lagoon dune structures. “All of those really affect water flow into the lagoon,” Nussbaum notes. Another influence on the dissolved oxygen levels in the lagoon was a nearby wastewater treatment plant, which in the 1970s sent treated sewage effluent into the lagoon. “Back then, the lagoon was reported to smell pretty bad, as you might imagine,” Nussbaum adds. “The fact that the lagoon inlet was closed almost year round, from the 1950s to the 1990s, didn’t help matters either. Being closed meant little water circulation, more potential for anoxic conditions and there were high nutrient sediments too, it wasn’t getting circulated and would just sit there…stinking.”

This state of affairs changed in the 1990s when concerned conservationists began to try restoring tidal circulation into the lagoon. From 1994 to 1999 there were experiments in opening the lagoon inlet. “Since 2000, we’ve had the current tidal circulation program in effect,” says Nussbaum. “It’s made a big difference. Lagoon water circulation is much better, and the health of the lagoon ecosystems have really rebounded in big ways.”

Environmental monitoring turned out to be a key component in improving water quality in the lagoon. “Our earliest handheld monitoring data in 1992 was an important part of the driving force behind lagoon improvement,” Nussbaum attests. “Our annual inlet excavation permit now requires us to continually monitor the lagoon. We are documenting the improved lagoon conditions every day we gather data.”

The improvement in conditions, however, does not mean today’s lagoon inlet is always open. “Each year, the lagoon inlet accumulates sand after winter storm cycles, and each year the San Elijo Lagoon Conservancy excavates the sand from the opening. In 2016 and 2018, the inlet closed prior to the planned inlet excavation due to storms,” Nussbaum recalls. “We had to do emergency excavation to reopen the inlet. The emergency excavation was necessary because it can only take about five days of closure for the lagoon to become anoxic. That’s when you start seeing major die offs of fish and other creatures. So of course we want to avoid that if we can.” Gathering data is key to preventing mass species deaths. “Our water quality monitoring is what gives us insight into what conditions are and how we should respond,” Nussbaum emphasizes.

Excavating the lagoon is not a small operation that a single person can do. “We need a front-end loader and an excavator to do emergency excavating,” says Nussbaum. Since 2000, annual maintenance has been performed on the lagoon to keep the inlet open and circulation healthy. “It’s a seven day task,” Nussbaum explains. “We need a front-end loader, two excavators and three dump trucks. Altogether, we move about 25,000 cubic yards of sand out of the inlet.” 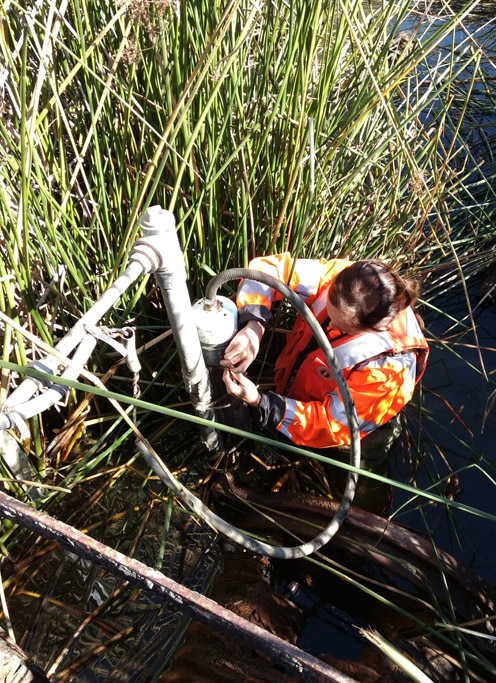 The lagoon inlet maintenance resulted in an increase in habitat quality for the lagoon, until about 2008. “At that point, we hit a quality plateau,” Nussbaum mentions. “We’ve gone way down in bacteria count and the problem we once had with the lagoon smell is much less. Cardiff State Beach, for instance, almost always had high bacteria warnings but since 2008 that rarely happens now.” While the historic problems of sedimentation, bacteria, and anoxic conditions were greatly reduced, there was still room for improvement, especially in regards to dissolved oxygen.

However, in December 2017, $120 million in Transnet funds was approved for the San Elijo Lagoon Restoration project. By removing accumulated sediment from the lagoon channels and making the channels deeper and wider, tidal circulation will improve in the future. Goals also include increasing the tidal flow and increasing the size of the tidal prism. Also, there is a plan to dredge nutrient-rich sediment which should help eliminate one of the main drivers of low dissolved oxygen. “We would like to achieve an improvement on the baseline data we have for dissolved oxygen,” says Nussbaum. “We would like to see hypoxic conditions to become an issue of the past. When the San Elijo Lagoon Restoration Project is complete, it will change things for the better for the lagoon,” says Nussbaum. “Tidal circulation will be restored in the East and West basins.”

As part of the San Elijo Restoration Project, the Lagoon Conservancy is implementing the Storm Water Pollution Prevention Plan (SWPPP). To monitor storm water pollution, several pieces of equipment will be employed, including a Hach 2100 Q portable turbidity meter and a YSI EcoSense pH10A pH pen. The project will also be measuring weekly the intersection of where the lagoon waters enter the Pacific Ocean. “I will be paddling out with my EXO2 on a weekly basis for the next two years to take readings from beyond the surf zone,” Nussbaum says.

Additionally, more adaptive water quality management techniques are coming to the lagoon. “We will be ordering submersible NEXSENS SDL-V2 which will provide live data from one of the sonde stations,” Nussbaum adds.

Besides all the water quality monitoring work, San Elijo Lagoon Conservancy has a wealth of other foci for environmental monitoring. “We’re home to the Ridgway’s rail, a federally endangered bird,” Nussbaum points out. “Birds here are monitored on a monthly and seasonal basis, depending on the survey series. Along with Ridgway’s rail, visitors to San Elijo might see some birds that are endangered in California, including Belding’s savannah sparrow, California gnatcatcher, Least Bell’s vireo and Southwestern willow flycatcher. If they are lucky, they may even see some nationally endangered birds like the least tern and the snowy plover. 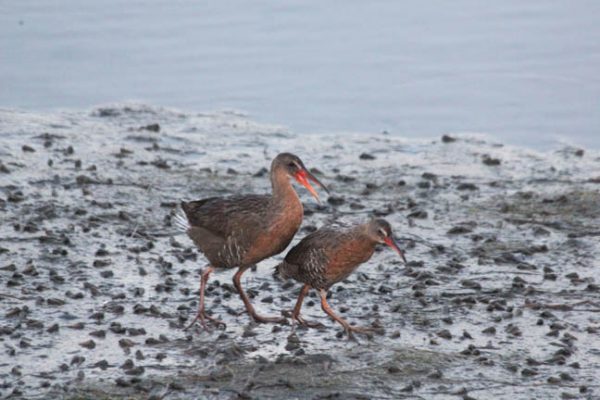 Photo is of an adult and juvenile Ridgway’s Rail in the morning at San Elijo Lagoon Ecological Reserve (Photo Credit: Jim Elliot)

Nussbaum isn’t the only one doing environmental monitoring at San Elijo Lagoon Conservancy. There are also six regular staff members and multiple contract biologists for the San Elijo Lagoon Restoration Project. In addition, there is also significant community involvement in habitat restoration. Community members involved in the Conservancy’s community volunteer program called “Lagoon Platoon” meet for habitat restoration work every Wednesday morning. There is also a Saturday event every month, which includes community members of most ages. Nussbaum estimates that there are around 1,000 volunteers every year. “Volunteers help us in many ways. For example, they help us put in plants for coastal sage restoration and they help us with restoring riparian areas. Some of the events they do are weekly, with a diversity of age ranges participating,” he says. College students often come from nearby Mira Costa Community College, California State University at San Marcos and University of California San Diego. San Elijo Lagoon Conservancy also participates in about 3-5 internships for college students each year.

Nussbaum plans on staying in his favorite habitat for years to come. San Elijo Lagoon Conservancy continues to be a big positive in his life as a researcher, and it still manages to surprise him. “I like our approach to water quality and habitat management here,” he notes. “There are also things that challenge my assumptions. I still haven’t figured out, for example, why our historic data set has no California gnatcatchers, but now we have them. I’m also amazed by some of the changes I’ve seen. Last year we had lots of rain, and my turbidity meter went over 200! That’s the highest I’ve seen during a storm event. Also, we had a big storm in February 2017, and this one day storm gave me the highest depth readings on my sonde by over a foot.”

In summary, San Elijo Lagoon Conservancy continues to impress Nussbaum with its uniqueness. “I think it’s great this lagoon reserve has been protected. There is such a lack of coastal lagoons, and it’s so special to me that we still have this one. There were plans to develop it as long ago as the 1970s, but it’s managed to survive. It’s great that it’s still here, that it’s still this pristine place, even though it’s surrounded by development on all sides. That’s what makes it special. I hope people will come visit it and see its uniqueness for themselves.”