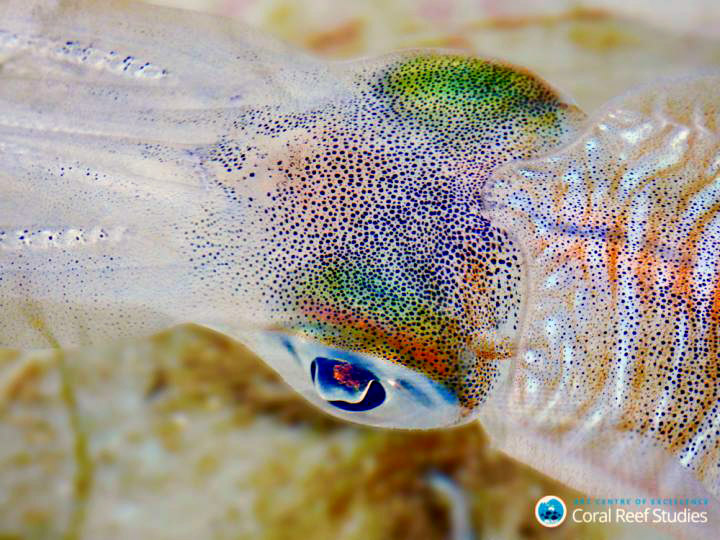 Carbon dioxide, CO2, is a waste product for animals, including humans. That means that too much of it can be dangerous. In humans, excessive exposure to CO2 can kill, but in lesser amounts it can also affect the blood’s pH level, causing acidemia. Acidemia can cause nerve damage, including hallucinations, delirium, and seizures.

Blake Spady, a PhD candidate from the ARC Centre of Excellence for Coral Reef Studies at JCU, corresponded with EM about the research and the investigation, which he led.

Just over one-quarter of CO2 released into Earth’s atmosphere is absorbed by oceans. This process leads to the acidification of our oceans, which disrupts food webs, and threatens coral and other marine creatures such as mussels. Without a major humanity-wide effort to reduce emissions of CO2, these problems will become severe relatively quickly, and certainly by the end of the century.

Spady and his team investigated the effects of CO2 on cephalopods, a classification that includes octopuses, squid, and cuttlefish, because to date, most research in this area has focused on fish. The effects of rising atmospheric CO2 levels on invertebrates remain mostly mysterious. This is important, because cephalopods play a critical role in marine food webs, preying on a wide range of creatures and themselves serving as food for many predators, including humans.

“When they did decide to attack the prey, they altered their predatory strategies or decision making during that attack compared to squid at control CO2 conditions,” explains Spady. “This includes things like taking longer to initiate their attack, attacking from further away, a reduced preference for attacking the posterior (rear end) of the prey, and changes in the body pattern choice during the attack.”

The team tested these effects in a controlled laboratory environment using aquaria systems at current day control CO2 level, comparing these conditions with those projected by the Intergovernmental Panel on Climate Change as an upper end-of-century projection (RCP8.5).

“We did not find, despite these altered behaviors, that this caused them to become less likely to capture their prey,” remarks Spady. “However, these experiments were carried out in a controlled laboratory and in the wild, with increased variables and unpredictable circumstances, these changes in behavior could allow prey greater opportunity to escape, but this cannot be confirmed without field studies.”

The team also found that under elevated CO2 conditions both species exhibited increased activity when they weren’t hunting, indicating that they might be altering their “energy budgets” to their detriment.

“An energy budget is something that all animals must maintain; it is essentially a balance of energy income against energy expenditure,” details Spady. “Jetting, the primary mode of locomotion in squid, is relatively inefficient due to the significant output of energy required from their mantle muscles and requires a high demand of energy and oxygen. This means that their energy budget must be finely tuned to allocate energy towards other tasks such as reproductive tasks and digestion.”

This research indicates that elevated CO2 levels are likely to impact a variety of cephalopods, given that the two under study here represent different orders and are within niches that are mostly distinct.

“It is important to note that what we found here was similar effects of elevated CO2 on two separate orders of cephalopod,” clarifies Spady. “An example of a cephalopod order would be ‘squid’, ‘cuttlefish’, or ‘octopus’. While the bigfin reef squid used here are a true squid (order Teuthida), the pygmy squid, despite their common name, is a member of the order Idiosepiida which is more closely related to cuttlefish (order Sepiida). This implies that there is potential for the behaviors of a very wide range of cephalopods to be affected by elevated CO2.”

However, cephalopods are also well-suited to survive changing conditions in some ways.

“Squid are opportunistic hunters and feed on a wide range of prey species; this could certainly give them an advantage over predatory specialists assuming a shortage or migration of their specific prey species as a result of changing ocean conditions,” details Spady. “However, the traits of squid that propose to give them the greatest advantage in succeeding in our future oceans is their short lifespans, large populations, and high intrinsic rate of population increase which potentially allows for rapid selection of genotypes more tolerant to elevated CO2 conditions compared to many other marine species.” One of the most interesting aspects of this work is the unusual body patterns the team observed under the higher CO2 conditions. Cephalopods engage in sometimes stunning and often puzzling displays thanks to their chromatophores, structural features in the skin that allow them to undergo rapid, expressive color changes. It’s not clear whether cephalopods show the behavior patterns the team observed here under any other conditions.

“The body patterns in cephalopods are extremely complex and not very well understood, remarks Spady. “Along with their obvious utilization for camouflage and cryptic behaviors, body patterns are used for communication with other members of the species, confusing or disorienting prey, and as a warning to predators. It is not clear what the body patterns displayed in this study indicate, but only that there was a significant difference in the types of displays used among CO2 treatment levels.”

Next, Spady and the team hopes to investigate how well squid can adapt to future ocean conditions due to their fast life cycle. To do this, they will need to test how cephalopods react to both elevated CO2 and control conditions over successive generations.