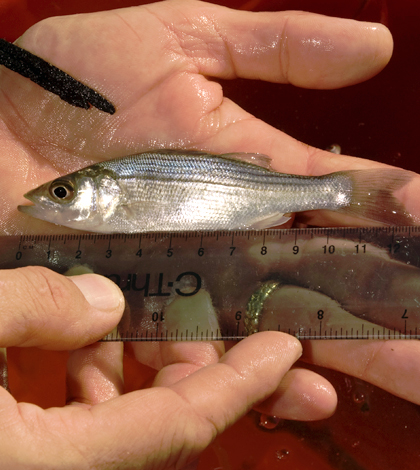 Fish migration patterns are hard to nail down regardless of where you study. But it’s even more difficult to do with tropical storm Irene making landfall.

Just ask Helen Bailey, an associate research professor at the University of Maryland’s Chesapeake Biological Laboratory. She and co-author David Secor, professor at the lab, saw firsthand just how much the movements of striped bass can vary when compared to that of white perch.

Part of that was due to the fish themselves, but another was partly due to the impacts of two tropical storms (the second was Lee) that crossed right through their study’s Hudson River Estuary location in fall 2011. Still, they obtained results that are useful for management of the fish in the estuary and may also prove critical for safeguarding their stocks in a future where extreme weather systems are predicted to become more common.

“We were partly focused on striped bass because my co-author had been attaching acoustic tags to the fish around New York Harbor,” said Bailey. “And it just so happened that we were able to study during these storms.”

“Temperature plummets, salinity plummets, and they just get washed out,” said Bailey, noting that some striped bass were able to maintain their positions in the river by finding ideal refuge habitat. “But many fish did move out because the conditions weren’t suitable for them.”

Investigators say that the fish tend to move south in storms. During the extreme weather, the striped bass largely just moved further to the south, according to acoustic tag data. A few bass went south and then ventured back up, potentially making exploratory runs to see if conditions had improved for overwintering in the estuary.

But once the second storm hit, those fish that had moved south cleared out.

“After the first event, they moved further down,” said Bailey. “But after the second storm, they bolted.”

She says that there was quite a bit of variability between fish response. While some of the striped bass shot south to get away from the tropical storms, others stayed put.

And there really wasn’t any clear reason as to why certain fish left or remained.

“It wasn’t the bigger fish. We had a small range of sizes,” said Bailey. “Even the smaller fish could find refuge.”

Through some of her previous work in marine science, Bailey has seen how common individual responses can be. From whales to sea turtles, it seems to hold up that creatures don’t all act the same just because they’re members of the same species.

“We see that individual variability a lot, so I wasn’t surprised. But I think this is how these animals survive, how they cope and survive,” said Bailey. “When we think in terms of what the fish do, we can’t look at them as a whole. Acoustic telemetry has given us more insight into how complex these animal behaviors are.”

In the traffic-heavy harbor, Bailey says it’s key to make sure that there aren’t impediments to stop striped bass from evacuating when extreme weather hits. Managers can also help to ensure that these fish stocks continue to be diverse.

“We have this variability. If we lost that diversity, then those events that they previously survived might have a different outcome,” said Bailey. “And that would be catastrophic.”

In the future, additional research needs to be done. Bailey says more fieldwork, fish tagging and modeling can help to figure out what impacts extreme weather events to come could have. And she’s currently working to better understand the habitat preferences of striped bass so that managers can know when the fish are more or less likely to be in certain areas.

Full results of the research are published under open-access license in the journal Scientific Reports.