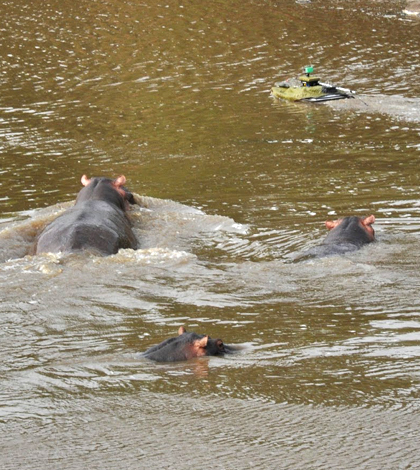 A hippo gives chase to a Platypus boat on the Mara River (Credit: Paul Scerri)

Giant hippos that line the banks and swim in the pools of the Mara River in Kenya may be contributing to fish kills downstream of their herds. Scientists who think that could be the case have had a hard time investigating it because the aggressive brutes tend to take exception to humans encroaching on their habitats to sample.

But it appears they may have a solution: Robotic, sensor-toting boats disguised as crocodiles.

Platypus is a start-up company spun off from Carnegie Mellon University’s Robotics Institute in 2012 that is working to develop small autonomous watercraft for environmental monitoring applications. Researchers from Yale University caught wind of what their boats can do and sought them out for help surveying the Mara River amongst the hippos.

That sounded like fun to Scerri, so he and Chris Tomaszewski, Abhinav Valada and John Scerri, all with Platypus, set out for Kenya in March, where they were hosted by Amanda Subalusky and Chris Dutton of Yale.

The Mara is a fairly small river in the low season, with slow lazy bends that create large pools where as many as 150 hippos congregate. The hypothesis is that, with each animal depositing more than 10 pounds of waste in the river a day, a significant amount of organic matter builds up on the bottom. As it decomposes, microbes consume oxygen and drop the water into hypoxia. When a flood flushes the system, the degraded water moves into fish habitats and chokes aquatic life.

But scientists know little about what’s going on in those pools, as each is guarded by dozens of multi-ton hippos, known as one of the most dangerous species in Africa. To investigate the pools, the Platypus team outfitted one of their boats with a foam crocodile head, an RBR multi-parameter sensor and a Lowrance fish finder to collect sonar data. They’ll work with Contour Innovations, a company that will further analyze the sonar data and produce a map of bottom hardness in the pools. The hope is that will give researchers an idea of whether the pools are lined with soft organic matter or hard rock.

The Platypus crew surveyed bottom hardness, dissolved oxygen and several other parameters in a number of pools before and after storms brought the river up 4 or 5 meters over night.

“It’d go from a very benign, calm place where we we did a lot of testing, to just a raging rapids that was throwing huge trees into rocks,” Scerri said. “We didn’t even walk down to the edge.” A monkey watches the boat from a bankside tree (Credit: Paul Scerri)

They’re still processing the data, but if the before-and-after pictures show that organic matter has been flushed out, it could be evidence that an abundance oxygen-eating material is suddenly somewhere else in the river.

The Platypus boats are equipped with Android phones with GPS capabilities. In most applications they operate autonomously along preplanned routes, but in this case they stayed under human control in case they needed to navigate away from a defensive hippo.

It was a smart choice, because that’s exactly what happened. Scerri said they had already surveyed a few pools and encountered a few curious hippos, but hadn’t seen much aggression. But this time, as Scerri’s brother John navigated the boat by a pod of bathing hippos, one broke away and gave chase. Suddenly, the normally talkative group was holding its breath. “It was an absolutely surreal experience,” Scerri said. “We’re all staring at this hippo chasing the boat.”

After a tense few seconds, John piloted the boat to deeper waters where the hippo couldn’t move as quickly, and it eventually gave up and turned around.