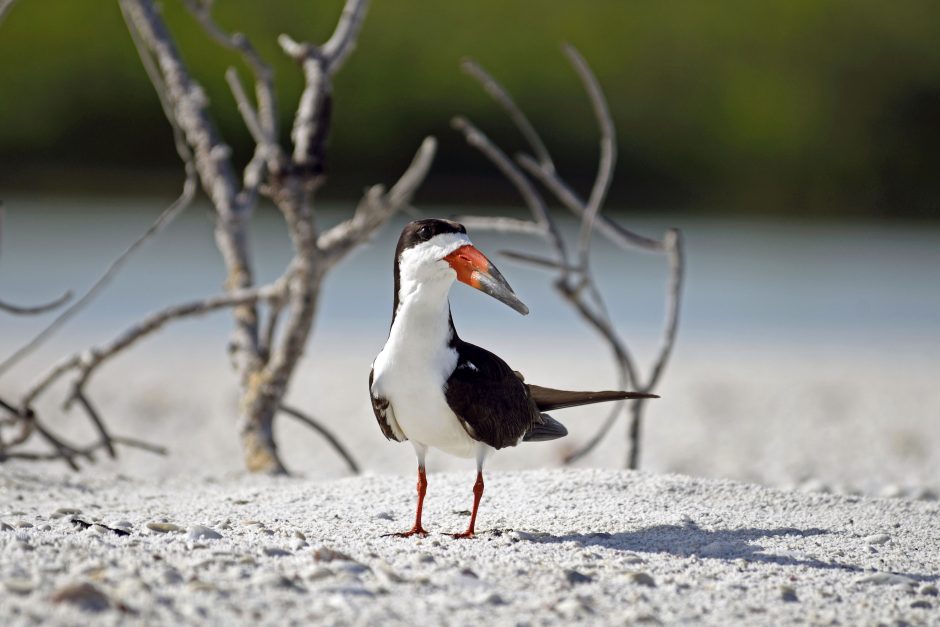 “Mangroves have a special 3D structure that makes them unique,” says Dr. Brita Jessen, Research Coordinator for Rookery Bay National Estuarine Research Reserve (NERR) near Naples, FL. “The structure helps trap sediment and it also creates structure for fish, crabs and other species, especially the ones that are young and vulnerable.”

Some notable species that make their homes in Rookery Bay mangrove forests are red drum, snappers, stone crabs and blue crabs.  There are also designated mangrove forest areas for the small-toothed sawfish.

“Mangrove forests are highly productive,” Jessen adds. “They take up carbon from the air and convert it to biomass, so they are good for carbon storage, too.”

The mangrove forests of Rookery Bay Reserve are conserved in perpetuity, an enormous value to the growing community for recreation, water quality and protection. Covering a 110,000-acre area to the north of the Ten Thousand Islands area, Rookery Bay was designated a Sanctuary in 1978 following the determined efforts of the Collier County Conservancy to purchase and preserve Rookery Bay and the surrounding land. 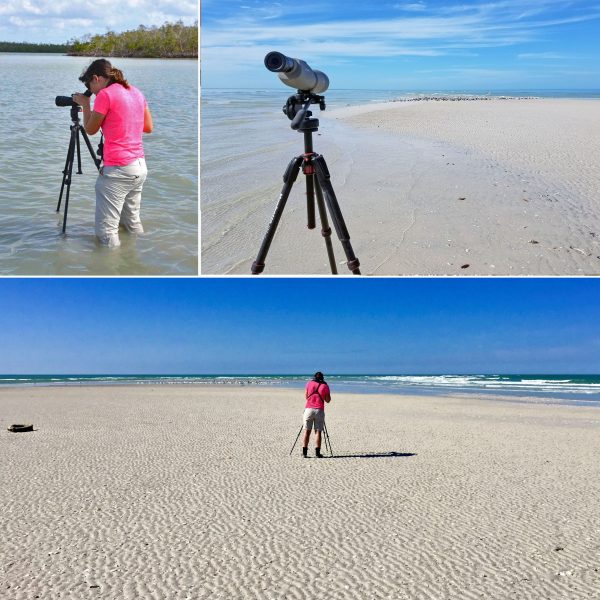 As part of the Florida Department of Environmental Protection and in coordination with the National Oceanographic and Atmospheric Administration, Rookery Bay NERR works with partners such as the U.S. Geological Survey, the Fish and Wildlife Service, several local universities, and non-profits such as the Conservancy of Southwest Florida and the Coastal Resources Group. Like the other NERRS, Rookery Bay utilizes the System Wide Monitoring Program (SWMP) for monitoring purposes. Water quality parameters that are measured continuously include temperature, pH, dissolved oxygen, turbidity and salinity; nutrients and chlorophyll are measured monthly and weather data; air temperature, wind speed, rainfall, photosynthetic active radiation, or PAR is monitored continuously.  There is also a robust vegetation and benthic habitat map of the area that is currently being updated. All of these data are provided through the Centralized Data Management Office (CDMO) for research, education and management on its website, www.nerrsdata.org. The Rookery Bay station has a telemetry unit that transmits data to the CDMO.

“We have five data sondes to gather water quality data. At four stations we deploy YSI EXO-2 sondes, with one station using the older YSI 6600 sonde,” says Jessen. “We actually have about a dozen active Xylem/YSI sondes, because we are constantly swapping them for maintenance. We also use a Teledyne ISCO autosampler for diel samples, and we have a Campbell weather station.”

A “Sentinel Site” program is currently in development.  Through this program, Rookery will monitor changes in coastal vegetation in relationship to elevation, sea level, and groundwater level and salinity.  Surface Elevation Tables (SETs) are monitored throughout the Reserve.

Rookery Bay NERR currently has a special wind sensor made to withstand hurricanes. “Unfortunately, though, our cable was not, and it broke loose during 140 mph hurricane winds,” Jessen recalls.

Jessen found the arrival of Hurricane Irma to be an exciting time at Rookery Bay.  “We decided to leave in three of our five continuous monitoring stations (whew, thank goodness they all stayed in place!).  These stations gave us great information about the immediate changes during and following the storm. We recorded the tidal recession and storm surge, the salinity change from precipitation, and (at two stations) a prolonged drop in dissolved oxygen following the storm.  For about a month following the storm, our resident fish populations were very low, but the population size appeared to recover about one month out. We are still looking into the data for any species-specific effects,” she says.

Rookery Bay also plans to use Motus, a Canadian/US sensor network of monitoring stations that utilizes automated radio telemetry to gather data on the movements of small creatures. In the future, Rookery Bay plans to use nano-tracking with sensors small enough to be affixed to birds, bats or even insects. 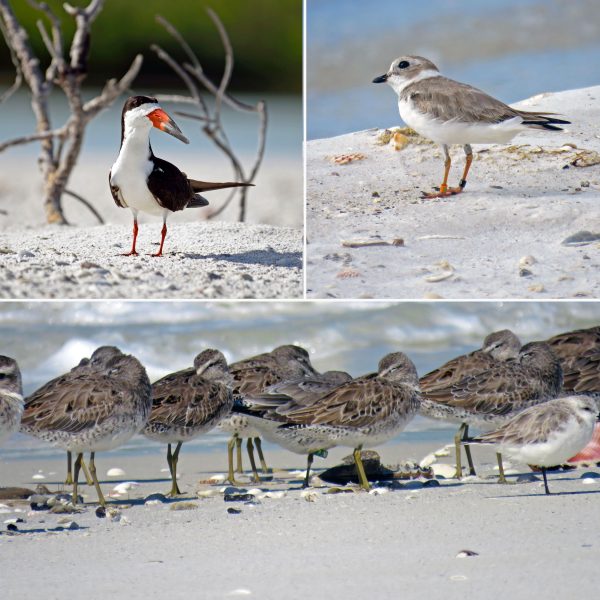 Invasive flora and fauna are monitored, as well as recovery after prescribed burns, which Rookery Bay NERR does during the January – March timeframe. “We recently bought a drone to look at the fire season landscape,” says Jessen.

Wildlife studies mentioned above are special for Rookery, but the NERR often works with partners to standardize methods and share data.  For instance, the sea turtle monitoring program identifies nests (Rookery cages those for protection from predators), “false crawls” where nesting was not successful, and hatchling success.  An additional study looks at nest and sand temperatures along an elevation gradient, which is also being replicated by two sister NERRs in Florida. The sea turtle monitoring program uses Onset Hobo temperature loggers.

A fish trawl program has been running for nearly two decades in the Ten Thousand Islands area.  Each month a trawl is conducted in three bays receiving different levels of freshwater input. This study has been recently enhanced by an acoustic monitoring program in partnership with NOAA, where Rookery Bay researchers tagged resident fish and juvenile sharks and deployed an array of acoustic receivers within two bays. The fish monitoring program uses Vemco acoustic tags and receivers. They hope to learn more about how different seasonal salinity regimes factor into habitat use by the fish populations. 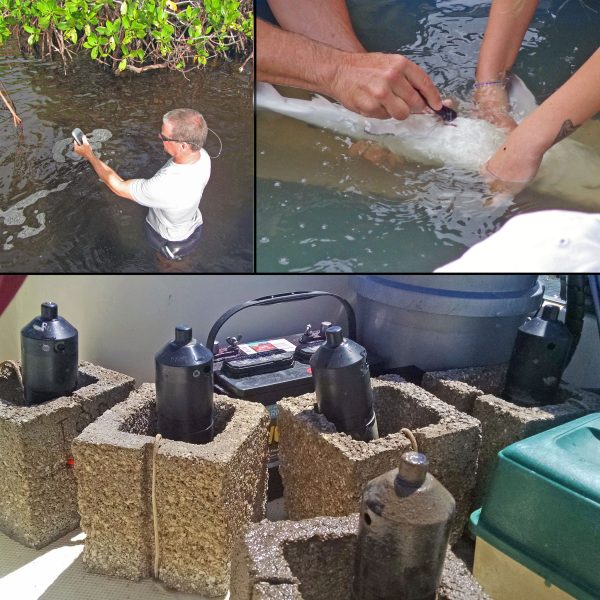 The shorebird and wading bird monitoring programs focus on critical habitat areas throughout the Reserve as we monitor populations of resident or migratory birds, nesting attempts and successful breeding.

Many people come together to make Rookery NERR research successful. The Rookery research team has five members. They work closely with resource management, which has an additional five researchers.  Since Rookery work is science-based management, there is often collaboration across departments for combined resource monitoring and stewardship.

In addition, interns help during the busy nesting seasons. Undergraduate or recent graduate internships on specific projects (recent examples are a GIS project and a carbon flux study in mangroves) are also supported.

Currently, there is no official citizen science program at Rookery, but there is an amazing group of dedicated volunteers: boat captains, birding experts, and strong-muscled men and women who help haul in and count the fish trawls.  Rookery also works with a group called Team Ocean who helps with stewardship and communication for the Critical Wildlife Areas and seasonal closures within the Reserve.

In addition to all the monitoring work and research, Rookery Bay is a steward of the 110,000 acres through restoration and active management.  One past undertaking was the removal of invasive Australian pine next to the reserve. “The pine trees allow erosion to happen that you don’t see with the mangrove forests,” says Jessen. “The pine trees don’t have the special root structure the mangroves have that trap sediment and hold the coastline together.”

Another major restoration project is the future restoration of the Fruit Farm Creek area. The construction of Highway 92 in the area impeded natural tidal flow and caused water to stay in the area longer than normal, gradually resulting in acres of mangrove forest die off. In the “die-off” site, the canopy has been lost and there are scant, stunted mangroves growing.  “But what I’ve found fascinating is that it’s still habitat for some very resilient species of algae, invertebrates and wading birds who stop by in the early morning before the heat comes in. Even in extreme conditions, nature finds a way to persevere,” says Jessen.

Jessen has been Research Coordinator at Rookery Bay NERR for two years. Before Rookery Bay, Jessen was a doctoral student at the University of Rhode Island’s Graduate School of Oceanography. She also previously worked for another NERR, running a nutrient enrichment program at Jobos Bay NERR in Puerto Rico, the subject of a previous article in Environmental Monitor.

“We have a team of extremely dedicated staff.  I’m always learning from them. I am very proud that we take a thoughtful approach between consistent monitoring, but with improvements as technology or new information becomes available.  It’s important to maintain standard protocols but also allow for change when it makes the most sense,” she says.

In summary, Jessen returns to the statement that the Reserve is a platform for research: “If any Environmental Monitor readers would like to reach out to us to explore new approaches to monitoring, we would be happy to support that.  We have a long list of additional monitoring needs to enhance our knowledge of change in our region, and partnerships are the best way we can achieve it,” she says.