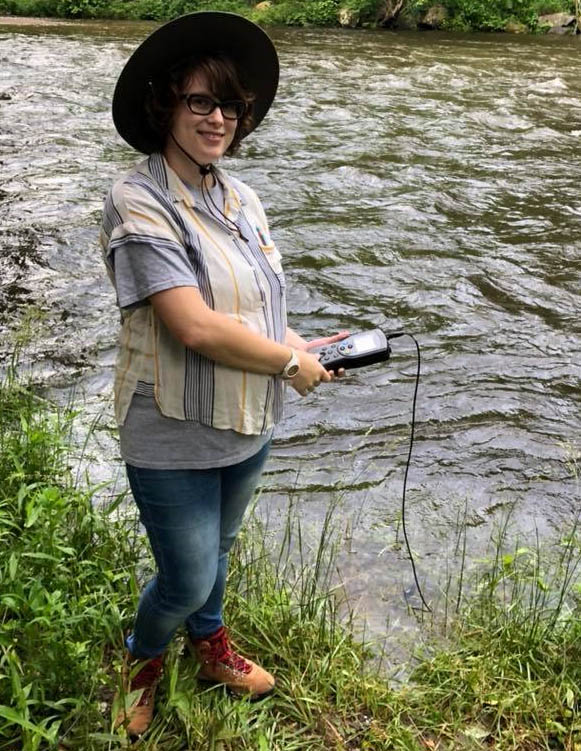 Mike Bolt has served the Eastern Band of Cherokee for 18 years. He is currently the Water Quality Section Supervisor, overseeing water quality over Tribal Trust Land, totaling around 58,000 acres. “This was original territory of the Cherokee. They have been here for thousands of years,” says Bolt. Unlike many native peoples who were forced off their land by the U.S. government, such as during the Trail of Tears, the Eastern Band of Cherokee have been able to remain in their original North Carolina settlements. “There are about 14,000 Cherokee that are enrolled members here. It’s a beautiful place, with great wild game and fishing. I enjoy fishing here myself,” Bolt enthuses.

Having previous experience as a water treatment operator, in his role for the Cherokee as Water Quality Section Supervisor, Bolt helps the tribe monitor permitted point source discharges and surface water quality. “The Tribal Trust Land is not one contiguous piece of land. In some places, tribal lands adjoin state lands. In those cases, they also do their own monitoring,” Bolt explains. 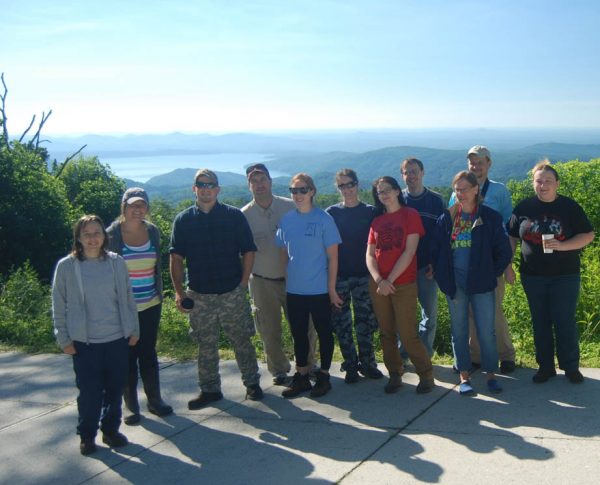 In addition to the water quality parameters mentioned above, Bolt and his colleagues also do some environmental monitoring that not every nature reserve performs. “We have cold water streams which are havens for cold water insects,” Bolt explains. “We perform macroinvertebrate monitoring focused on mayfly, stonefly and caddisfly. These flies are great indicators for the health of the rivers. They live in the streams for a long time, due to their life cycles, and so they are good indicators of overall health.” Samples are collected by kicking up rocks in stream beds and gathering the resulting samples in a tray. “We look at the taxa richness,” Bolt continues. “The more diversity we see, the better the stream health. In the samples of flies there are some species that are relatively sensitive to pollution and some that are less sensitive, so we hope to see all of them well-represented.” Good representation of both the less sensitive and more pollution sensitive species suggests that pollution levels are relatively low. Insect samplings are done annually, though if there is a catastrophic event they may be done more frequently.

The caddisfly deserves special mention. “The larvae are stick bait, grubs that are good trout bait. They create elaborate homes for themselves,” says Bolt. Gathering many materials around them to make a mobile shelter, caddisfly larvae have even been given valuable pieces to use for construction, such as gold and semi-precious stones, resulting in the creation of some unique jewelry. Caddisfly-made jewelry sometimes sells for hundreds of dollars apiece. 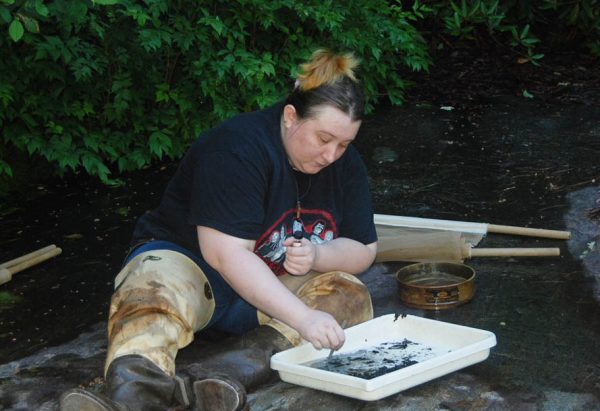 Bolt is not the only one performing water quality monitoring. Four full-time staff do environmental monitoring for the Cherokee reservation. One staff member focuses on stream level monitoring, one focuses on National Pollutant Discharge Elimination System (NPDES) and EPA permit monitoring, one does Clean Water Act 106 Grant issues and one primarily focuses on fulfilling a wetlands monitoring grant. Staff members share research facilities and equipment. The four staff members also do community outreach.

“Water samples give you a split second picture,” says Bolt. “To really develop an understanding you need to take a lot of samples regularly over time. Minimum sampling is monthly, our waters are divided into six sub-basins rotated annually and we have three continuous stations and are adding three more this year.” The Cherokee land has a number of little watersheds that flow into larger watersheds. Raven Fork, Soco Creek, Snowbird Creek, Hiwassee, Valley and Oconaluftee Rivers are the headwaters where most of the tribal lands are. These are in the Cheoah, Hiwassee and Little Tennessee River Watersheds and together they are all in the Tennessee River Watershed.

“There are more people here impacting the waters now than there were 20 years ago,” says Bolt. “Cherokee has become more of a popular tourist destination. There are also more employment opportunities here for Cherokee than in the past.” Bolt attributes some of the popularity of the area to the casinos. But nature’s bounty is also a big draw. “The cold water trout fishing is great. We have healthy trout populations that are popular, like rainbow trout. The rivers are also stocked, so visitors are likely to catch a few. We don’t want the tourists to be disappointed,” Bolt adds.

Wading out to get fish is popular. Sections are marked for fly fishing, fishing for consumption and catch and release. Fishing is often done using red worms as bait. “When you get your fishing license, there’s a guide you get which explains which areas are to be used for which type of fishing. Typically you can take ten fish per day for eating if you fish in the designated fishing for consumption areas,” Bolt says. 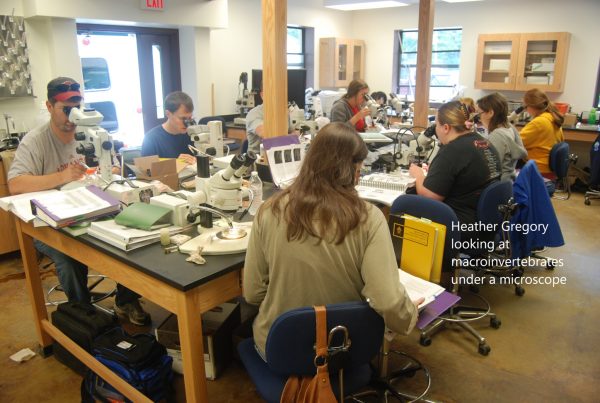 The Cherokee streams have in the past been affected by acid deposition. “Twenty years or so ago the state felt there was too much pollution coming from the industrialized Tennessee Valley. The state sued. There’s been improvement since then,” Bolt explains. “In the time I’ve been here, I’ve been surprised by the resilience of these streams that I’ve seen, such as the pH of the headwaters getting better.”

The future of the Cherokee in the area is built on an ancient past. Not all of the stories of the past are pleasant. “I don’t know if you were aware of this, but it’s important to mention the story of why the Eastern Band of Cherokee was allowed to remain on their native lands, but many other tribes were not. When the U.S. government sent troops to move the Native Americans, the Cherokee resisted. A very brave man named Tsali was their leader. Fighting ensued. But the U.S. troops made the Cherokee a deal to resolve the conflict: Tsali was to hand himself over to be executed. In return, the Cherokee could stay on the tribal land they had occupied for centuries. Tsali accepted the deal. He made the ultimate sacrifice so that the Cherokee could stay. That is why they are still here today,” Bolt explains. “He was executed by a firing squad in Bryson City, North Carolina. There’s a historical marker there to commemorate the event.”

Almost two hundred years later, the future of the Cherokee is bright. Employment is up. Tourism is up. The streams are clear. “Later this year we will be submitting our application for federal approval of our tribal water quality standards. Only about 45 tribes, about 10 percent, have been granted approval. Getting approval will make it easier to deal with external polluters, if we have issues, as they will have to meet the federal standards as their water flows onto our land,” Bolt explains. “That would be a big step in the right direction for us.”

Like the thousands of tribal members and the many tourists, Bolt appreciates the natural beauty and the history of the Cherokee lands.  “The reservation is truly unique, being part of North Carolina but at the same time being a Sovereign Nation with a culture that goes back thousands of years,” Bolt reflects. “We have many pristine cold water streams that are a joy to work in. I really enjoy what I do.”