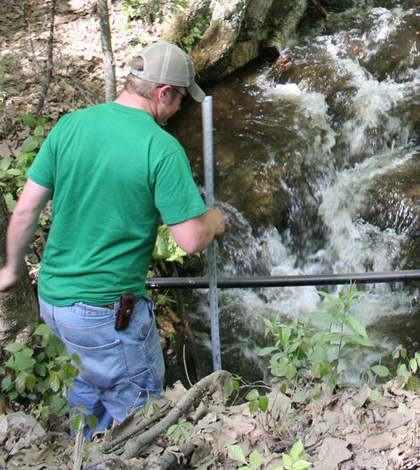 The Eastern brook trout is common today in Massachusetts streams, but due to a warming climate and more frequent flooding events, it may vanish in as few as 15 years if the species fails to evolve rapidly, scientists say.

But Ben Letcher, ecologist at the U.S. Geological Survey and adjunct faculty in environmental conservation at the University of Massachusetts – Amherst, believes that a better understanding of the effects of climate change on Eastern brook trout may help the fish avoid an untimely demise.

“The Holy Grail in evolutionary ecology for a species like this is answering the question: How fit are individual fish and what makes them fit?” says Letcher. “We want to look at a variety of potential drivers and see which characteristics lead to success for Eastern brook trout.”

Investigating the fish to answer the fitness question is complex. The study Letcher is involved in has been ongoing for 10 years, leading to data collection on some 15,000 fish over the test timeframe. Letcher and his team monitor stream temperature, track streamflow metrics and track individual fish. These have their fins sampled to get genetic information. The fin samples taken are so small that they’re barely half the size of a pinkie nail.

Fish in their first year in the fall are about 60 millimeters long, which is large enough for them to receive passive integrated transponder (PIT) tags. Each tag has a unique ID, allowing Letcher and his team to track individual fish over the course of their lifetimes.

“We can track them until the end of their lives, and we are also able to distinguish between whether they have died, or have simply left the stream,” Letcher says. Stationary antennas in streams record movements of individuals at the boundaries of the study area and can tell when fish leave. Letcher and his team tag fish at regular intervals, obtaining fish through electrofishing.

“It takes thousands of fish to form a picture of individual fitness,” Letcher explains. “Our genetic analysis tells us where the fish were born, where they grew up, where they went, how long they survived. Over time and with a large number of fish, we can understand a lot about them as individuals and also see patterns that emerge in populations. We try to recreate their family trees, looking at parents, grandparents and their kids.”

Letcher uses a central database manager to organize the enormous amount of data for the multi-year project. He and his team use Juniper system field computers, which look like handheld GPS devices.

Shown on these field computers, each row on a grid is a fish, with each system havgin about 500 to 2,500 such rows. Stream areas are divided into 20-meter sections, and where the fish goes is recorded between the sections. The information goes into a CSV file and is run out of Microsoft Access using the R computing language, which is open-source and free.

“We have done fish samplings in spring, summer, fall and winter,” says Letcher. “Seasonal variations are very important for the fish. For example, 75 percent of fish growth occurs in the spring.” Letcher has also been able to determine through painstaking data analysis that high summer temperatures reduce fry survival, likely by increasing their metabolic rates. Spawning is a fall event, which occurs in relatively small, shallow nursery streams. “Increased flooding due to changes in climate hurts developing fish by washing them out of the nursery streams into deeper water, where they don’t survive as well,” Letcher explains. In terms of the latest research, Letcher says they are turning toward genomics. “The genome of Eastern brook trout hasn’t been sequenced yet, so we don’t yet have anything to work with…ultimately, though, we want to relate the fish’s fitness to certain functional genes,” Letcher says.

Other equipment valued by Letcher and his team is a forward-looking infrared camera, which shows the surface temperature of the water, and also indicates where groundwater input is. However, the usefulness of this device for monitoring Eastern brook trout has some limits, as the fish bury their eggs below the surface, under gravel.

Letcher has had some surprises in the course of the 10-year study. “We didn’t realize the males traveled around as much as they do. Also, for about 50 percent of the fish, we found no siblings. There were very few large, successful families,” he says. “We also found that streamflow conditions were a significant factor influencing fish distribution. High streamflows are especially important in the fall when spawning fish are trying to reach tributaries.”

Of the research done so far on the Eastern brook trout, Letcher summarizes, “We’ve seen some interesting patterns. For example, as climate temperature increased, we could see a 50 percent decrease in the number of fish, but the fish were bigger. We could directly relate the change in numbers of fish to the increase in temperature and the change in fish body size to the lower numbers. We’ve done detailed demographic modeling but have not yet incorporated genetic models. We are still working on eco-evo models. We’ve made a lot of progress but there’s still quite a bit more we hope to learn about whether brook trout can adapt to climate change.”

Letcher’s team for the Eastern brook trout study consisted of anywhere from 15 to 20 people in a given year, with a core team of four people. The team included conservation geneticists, about 10 people just to perform fish sampling and various University of Massachusetts – Amherst student workers.

“We’re grateful that USGS and other agencies gave us the necessary support to do such a large, multi-year study,” Letcher emphasizes.