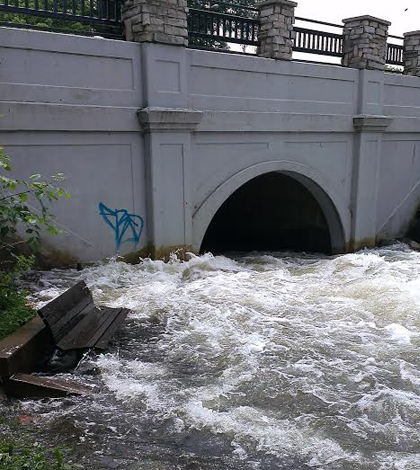 In the first half of 2014, the Minneapolis-Saint Paul metro area got more rain than it had gotten since modern water level record-keeping began there. For those working to track flow and water quality on streams in the region, keeping up with all the extra water was a huge undertaking.

Lake Minnetonka, as well as many streams in the region, were greatly impacted. The lake saw its height above sea level reach 931.11 feet, exceeding the record by 7 inches. And 26 other lakes and streams around the Twin Cities set new all-time records for elevations or flows.

Officials at the Minnehaha Creek Watershed District were on the ground and fighting against the high waters to take measurements throughout the ordeal that caused more than $1 million in damage to streams across the District. Some of their monitoring sites had been completely flooded out. Meanwhile, the SonTek Flow Trackers that they typically used to track discharge were rendered useless because it was simply too unsafe to wade out into the streams to collect data.

As a workaround, they employed an OTT MF Pro Flow Meter. It operates with an electromagnetic sensor head that allowed them to take measurements from a safe distance. Gathering data during this time was important, as the District worked diligently to share information on water levels and quality, as well as safety tips to the public during the high water conditions.

“Since we were unable to enter the water, we purchased the Pro Flow meter so we could safely measure the flow over culverts and bridge decks,” said Yvette Christianson, water quality manager at the District. “Typically, Minnehaha Creek is flowing anywhere from 20 cfs (cubic feet per second) up to 150 cfs. There is a controlled dam at the outlet of Lake Minnetonka where it can release between 12 cfs to 300 cfs. Using the flow meter, we measured up to 503 cfs.” As for the flow of Minnehaha Creek, it shattered its previous record as well, logging some 889 cubic feet per second. This finding was captured by a U.S. Geological Survey gaging station about 20 miles downstream from the Lake Minnetonka outlet.

“We typically would be using the SonTek Flowtracker during this time, but due to the record-high rain and 100 year-stream flow event, we were unable to wade in the streams to get the discharge,” said Christianson.

She notes that discharge was one important parameter that they were tracking. That’s because it factors into calculating stream loading, a measure of the solid matter the waterways were carrying.

Measures of loading, as well as other physical and chemical parameters, helped to inform a report on the flooding’s impacts. Christianson says that the data were also useful in judging how the health of the system is impacted by high water flows.

She notes that the flooding and erosion that came with it led to higher nutrient loading. That really was no surprise, especially in comparing data from previous years’ investigations.

“It was a crazy and hectic year of monitoring both lakes and streams. To-do lists were prioritized to focus on the collection of data in these systems to get a better understanding of how 100-year events affect the ecological system of our watershed,” said Christianson. “Having the right equipment allowed us to accomplish this goal.”