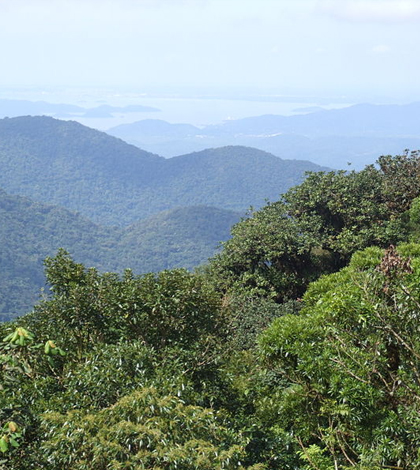 Tropical forests are said to be the lungs of the planet, breathing in what we humans breathe out. But the scale of these forests means that, even though they take in lots of carbon dioxide, they also emit lots of the gas in their own right through fires and human-caused deforestation. And so the question is: Are tropical forests, like the massive Amazon, net carbon sinks or sources?

Scientists at the NASA Jet Propulsion Laboratory and the National Center for Atmospheric Research set up an analysis to find out. Their work relied on combining data from across scientific fields as they tried to ascertain tropical forests’ role in global carbon dioxide levels from the activities of single trees up to global cycles that impact the whole planet.

“We’re concerned about the impacts that a changing climate is having on the planet, and with tropical forests we have potential to take some of that CO2 back,” said Josh Fisher, climate scientist at NASA’s JPL and a co-author on the study. “Tropical forests are big, but they’re also super active. It’s always sunny, wet and warm – the right conditions for photosynthesis.”

Those conditions are what have led many scientists to believe that tropical forests must be net carbon sinks. But there’s one thing lacking in the soils of these forests, says Fisher: phosphorus. That limitation is an important one in gauging the fertilizing effect carbon has in tropical forests. Scientists have found that tropical forests, like the one in the Lesser Antilles pictured here, are absorbing much more carbon dioxide than previously estimated. (Credit: Frameme, via Wikimedia Commons/CC BY 3.0)

“Lots of things contribute to plant growth,” said Fisher. Those include water, carbon dioxide, phosphorus, sunlight and temperature, among other things. But if any of those are in limitation, growth will be affected, says Fisher. “The phosphorus is missing. So we’re blasting them (trees) with CO2, but if there’s no phosphorus it won’t do anything.”

Few studies had subjected forests to high levels of carbon dioxide to find out the effects of the gas on their growth. But through the massive data analysis Fisher and co-authors Dave Schimel and Brit Stevens completed — combining models on ecosystem processes and atmospheric changes, satellite images, and findings from experimental forest plots — they were able to tease out what fractions of growth were due to the effects of carbon dioxide.

The figure came to about 60 percent, meaning that most of the growth seen in tropical forests can be attributed to the effects of carbon dioxide.

“We were able to come to that conclusion with independent scientific communities coming together,” said Fisher. “The atmospheric and forest communities just hadn’t been connected before this. The atmospheric community measured where CO2 emissions come from while the forestry data was focused on trees. But the two totally disconnected communities were coming at the same answer.”

The growth rate due to carbon dioxide backs up another important find of the research: Forests like the Amazon are taking in much more carbon dioxide than previously thought. Scientists found that out of a total 2.5 billion metric tons absorbed each year by forests worldwide, tropical forests take in 1.4 billion metric tons. And though some believe this conclusion was an obvious one, Fisher disagrees.

“I wasn’t really surprised to find that tropical forests are carbon sinks,” said Fisher, recounting his previous research experiences in the Amazon where mass logging and forest fires made it hard to tell which side of the issue the forest was on. “It was hard to say at that time who would win in that battle. But if we had found the opposite conclusion, I wouldn’t have been surprised either. It really wasn’t clear which was winning.”